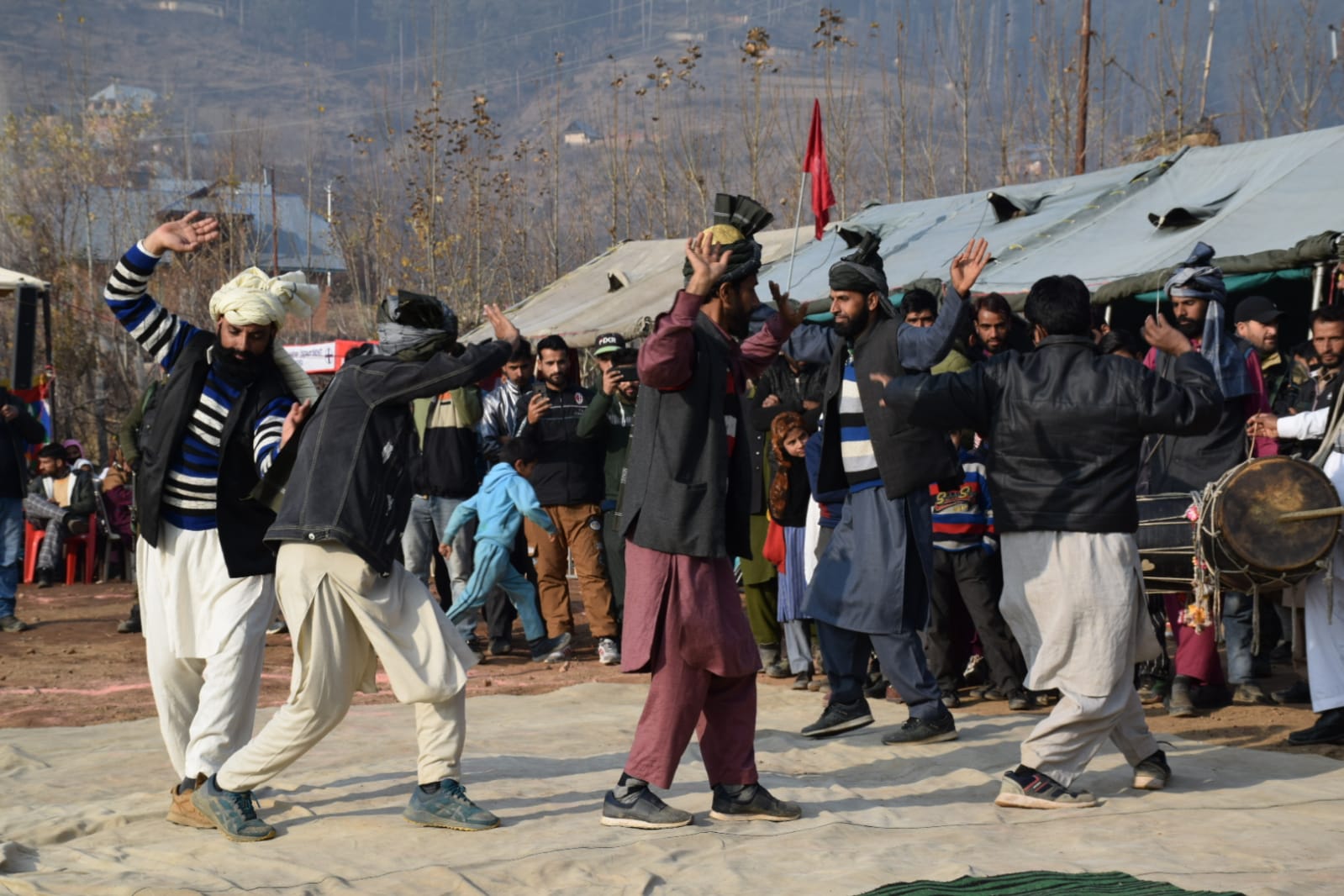 Bandipora, Nov 30: North Kashmir's Bandipora district on Wednesday hosted the first ever winter tribal tourism festival of Kashmir valley which was held at Ketson tribal hamlet of the district.
Tribal people in their traditional attire thronged the picturesque hamlet Ketson to witness varied shades of ethnic tribal culture.
The festival witnessed a variety of programmes which were a mixture of music, dance, and depiction of culture through music and dances that attracted the attention of people and enthralled the audience who responded and appreciated by cheering at them.
To the beats of typical Desi Dhol, people from Kashmiri Community, Gujjars and Bakerwals hit the floor and shook legs together in a unique portrayal of cultural unity in diversity.
The indigenous tribal game Gatka was another attraction of the day that was performed by members of two tribal communities portraying the fighting spirit of the Gujjar Community amid all geographic, social and political odds.
The Ketson winter tribal festival is the first of its kind in Jammu and Kashmir to promote tourism and to revive and preserve the culture and heritage of tribal communities in Jammu and Kashmir.
Deputy Commissioner Bandipora told Rising Kashmir that Ketson tribal festival is unique and brings out the essence of the tribal population who follow certain customs and traditions. "The festival is being given a boost by the District administration in collaboration with the Tourism department as tourists will get insights into tribal's lesser known communities and their lifestyles", he said.
He said that the festival aims at reviving, promoting and preserving the tourism in the district, unique traditional games, culture and cuisine, especially the customs of the tribal population.
Miyan Nazakat, a local while thanking the district administration and tourism department told Rising Kashmir that by organizing this first ever tribal festival here will be very beneficial for the people here in the coming time.
Miyan said that the arrival of tourists in this remote and beautiful area will not only increase the employment here, but will also reflect the tribal culture and civilization before the world.
Shabnum Bashir Gojer Cheechi, who played a significant role in bringing this tribal hamlet Ketson on tourism map told Rising Kashmir that his hardwork and efforts paid off as finally the much awaited festival was organised here which was her desire from years.
Shabnum said that to bring the ketson on the tourism map, she had to walk several times by foot and her feet were also injured due to burst shoes, but she never gave up. "Getting Ketson on the tourism map and holding this first ever tribal tourism festival here, which will reflects the culture and tourism of this place before world, is a real salve for those wounds", she added.
Notably, Ketson , a picturesque tribal hamlet is among Jammu and Kashmir's 75 villages which were identified by Lieutenant Governor Manoj Sinha under a tourist village network known for historical, picturesque beauty, and cultural significance to transform these picturesque villages into tourist villages.

Sanitation is all about bringing change in our attitude: CS

GSI to conduct study after houses develop cracks in Doda

Building collapse at Narwal: Jammu Smart City denies media reports, says no work being executed at the site by JSCL

Safety of public has been & will continue to be top priority of J&K Police: DGP Singh

After Delhi, AAP's Liquor scam in Punjab should also be investigated and exposed: Chugh

Cracks had appeared in houses since December, now they have started aggravating, says Doda SDM

India to host global energy meet in Bengaluru next week