Stand up for Dignity, Freedom, and Justice for All

“We declare that human rights are for all of us, all the time: whoever we are and wherever we are from; no matter our class, our opinions, our sexual orientation.” – Ban Ki-moon 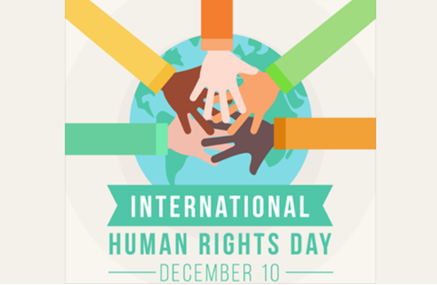 Human rights are rights inherent to all human beings, regardless of race, sex, nationality, ethnicity, language, religion, or any other status. It includes the right to life and liberty, freedom from slavery and torture, freedom of opinion and expression, the right to work and education, and many more. These human rights are the same for all people everywhere – men and women, young and old, rich and poor, regardless of our background, where we live, what we think or what we believe. This is what makes human rights ‘universal’.

The rights covered by the Covenants are: Freedom from discrimination, right to equality between men and women, right to life,  freedom from slavery, right to liberty and security of person, right to be treated with humanity in detention, freedom of movement, right to a fair trial, freedom from torture and other cruel and inhuman treatment, freedom of speech, freedom of religion, rights to health, education and an adequate standard of living, civil and political rights, which refer to a person’s rights to take part in the civil and political life of their community, the right to privacy, economic, social and cultural rights, which relate to a person’s rights to prosper and grow and to take part in social and cultural activities. Human rights connect us to each other through a shared set of rights and responsibilities.

The rights are not a recent invention - ideas about rights and responsibilities have been an important part of all societies throughout history. Since the end of World War II, there has been a united effort by the nations of the world to decide what rights belong to all people and how they can best be promoted and protected. Human rights are an important part of how people interact with others at all levels in society - in the family, the community, schools, the workplace, in politics and in international relations. It is vital therefore that people everywhere should strive to understand what human rights are.

When people better understand human rights, it is easier for them to promote justice and the well-being of society.  They come from the fact that we are not only physical beings, but also moral and spiritual human beings. Human rights are needed to protect and preserve every individual's humanity, to ensure that every individual can live a life of dignity and a life that is worthy of a human being. Absolutely everyone viz-a-viz criminals, heads of state, children, men, women, Africans, Americans, Europeans, refugees, stateless persons, the unemployed, those in employment, bankers, those accused of carrying out acts of terrorism, charity workers, teachers, dancers, astronauts

Human Rights Day is observed every year on 10th December — the day the United Nations General Assembly adopted, in 1948, the Universal Declaration of Human Rights (UDHR). When the General Assembly adopted the Declaration, it was proclaimed as a "common standard of achievement for all peoples and all nations", towards which individuals and societies should "strive by progressive measures, national and international, to secure their universal and effective recognition and observance".

The UDHR is a milestone document, which proclaims the inalienable rights that everyone is entitled to as a human being - regardless of race, colour, religion, sex, language, political or other opinion, national or social origin, property, birth or other status. Available in more than 500 languages, it is the most translated document in the world. In the decades since the adoption of the Universal Declaration of Human Rights in 1948, human rights have become more recognized and more guaranteed across the globe. It has since served as the foundation for an expanding system of human rights protection that today focuses also on vulnerable groups such as persons with disabilities, indigenous peoples and migrants.

A person’s ability to enjoy their human rights depends on other people respecting those rights. This means that human rights involve responsibility and duties towards other people and the community. Individuals have a responsibility to ensure that they exercise their rights with consideration for the rights of others. For example, when someone uses their right to freedom of speech, they should do so without interfering with someone else’s right to privacy.

Governments have a particular responsibility to ensure that people are able to enjoy their rights. They are required to establish and maintain laws and services that enable people to enjoy a life in which their rights are respected and protected. For example, the right to education says that everyone is entitled to a good education. This means that governments have an obligation to provide good quality education facilities and services to their people. Whether or not governments actually do this, it is generally accepted that this is the government's responsibility and people can call them to account if they fail to respect or protect their basic human rights. Human rights cover virtually every area of human activity.

Human rights are standards that recognize and protect the dignity of all human beings. They govern how individual human beings live in society and with each other, as well as their relationship with the State and the obligations that the State have towards them. Human rights law obliges governments to do some things, and prevents them from doing others. Individuals also have responsibilities: in using their human rights, they must respect the rights of others.

No government, group or individual person has the right to do anything that violates another’s rights.  Human rights are universal and inalienable. All people everywhere in the world are entitled to them. No one can voluntarily give them up. Nor can others take them away from him or her. They are indivisible. Whether civil, political, economic, social or cultural in nature, they are all inherent to the dignity of every human person. Consequently, they all have equal status as rights. There is no such thing as a 'small' right. There is no hierarchy of human rights.

Human rights are moral entitlements that every individual in the world possesses simply in virtue of the fact that he or she is a human being. In claiming our human rights, we are making a moral claim, normally on our own government, that you cannot do that, because it is a violation of my moral sphere and my personal dignity. No-one – no individual, no government – can ever take away our human rights. Every person and all peoples are entitled to active, free and meaningful participation in, contribution to, and enjoyment of civil, political, economic, social and cultural development, through which human rights and fundamental freedoms can be realized. A person's human rights cannot be taken away.

In its final Article, the Universal Declaration of Human Rights states that no State, group or person '[has] any right to engage in any activity or to perform any act aimed at the destruction of any of the rights and freedoms set forth herein'. The Universal Declaration and other human rights treaties are more than just noble aspirations. They are essential legal principles. To meet their international human rights obligations, many nations have incorporated these principles into their own laws. This provides an opportunity for individuals to have a complaint settled by a court in their own country.

Consider the abolition of slavery, the vote for women, the countries that have abolished the death penalty, the freeing of prisoners of conscience as a result of international pressure, the collapse of the apartheid regime in South Africa, the cases that have been tried before the European Court and the laws that have had to be changed as a result. Consider the fact that the gradual change in international culture means that even the most authoritarian regimes now have to take human rights into consideration in order to be accepted on the international stage.

There have been many positive results, particularly over the past 50 years, but a great deal more remains to be done. Yet there is no country in the world that has a completely clean record on human rights, even today. There may be more frequent violations in some countries than others or they may affect a larger proportion of the population, but every single violation is a problem that ought not to have happened and that needs to be dealt with. An individual whose rights are violated in one of the established democracies is likely to be comforted by the fact that, in general, their country has a "better" record on human rights than other countries in the world!

“To deny people their human rights is to challenge their very humanity.” – Nelson Mandela