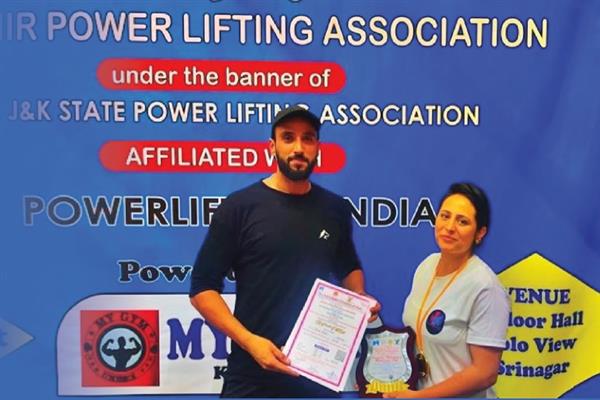 Be it rugby pitch, basketball court, volleyball court, race track or powerlifting arena, Insha Bilal has crushed her opponents with her athletic accolades and achieved victory on every field.

Hailing from Indra Nagar, Srinagar, Insha is a national volleyball player and a powerlifter. Since childhood, she was interested in sports and would never keep herself away from participating in various sports activities. Watching her passion, her father suggested that she pursue her studies in sports and take it as a career.

She has been awarded with the title of power woman twice by Kashmir Powerlifting Association. In 2022, she has won three gold medals in the bench press, deadlifts and squats. She received a gold medal in powerlifting competition organized by JK Sports Association in March this year and also got selected in the state powerlifting championship.

The reason she mentioned was that she wanted to explore her capabilities. She said, “The thing is that volleyball, rugby or basketball are team games. Your victory is the efforts of the whole team but I wanted to see my capabilities as a player. I wanted to be known by my name. That’s how I switched to powerlifting.”

Insha, who is in the 74 weight category in powerlifting said that initially the gym was associated with men and boys but girls are also coming forward to take interest in the field. “Girls are competing with boys. I have never felt uncomfortable in the presence of men. In sports, there should be no gender,” she said.

“I used to lift weights earlier too but my fitness trainer Mohammad Aqib from the fitness nation has helped me win medals and titles. Also, my volleyball coach, Muneer Alam helped me excel in the game. I have always been lucky to have the support of great people,” she said.

Societal pressure was something that she had to face but she lived her dream despite criticism. “When I was sent outside to pursue studies in sports, I witnessed a lot of criticism but my family never paid heed to all this. My father and brother never got influenced by people’s opinion,” she said.

Now, there is no stop for her. In future, she wants to continue powerlifting and is also preparing for her Ph.D. entrance examination. “I also want to pursue a course in fitness training because it’s a vast field and a good opportunity for people to grow. There are a lot of misunderstandings related to females in sports but that’s all nonsense. A girl can make a good career in sports. Parents should support their daughters and girls should also bring laurels to their parents’ name.” she said.