Record number of 38000 players registers for tourney across UT 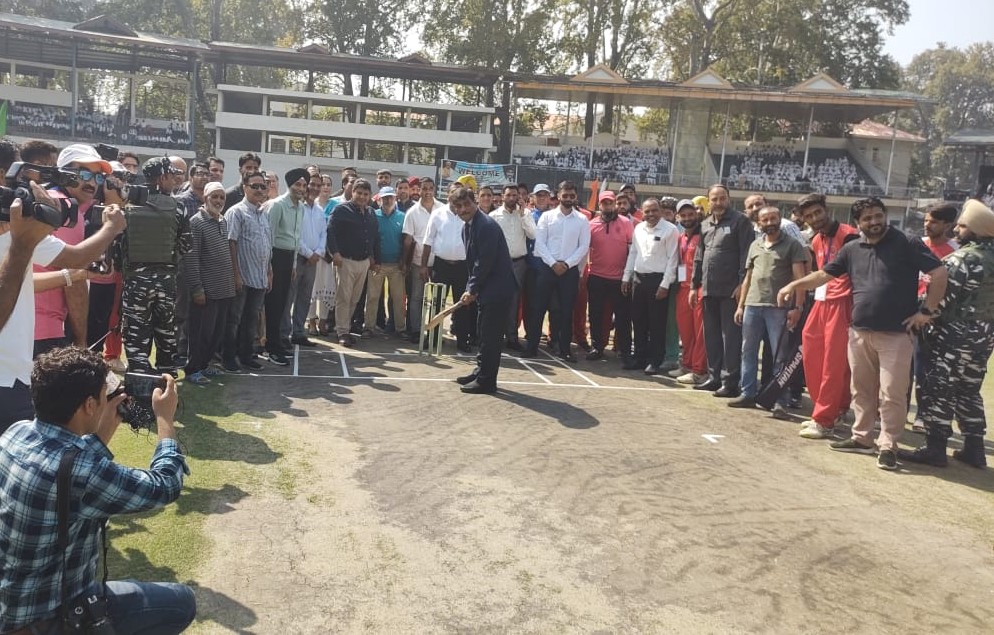 Jammu, Sep 22: Chief Secretary, Dr Arun Kumar Mehta Thursday inaugurated the UT wide Lieutenant Governor's Rolling Trophy Cricket-2022 here at Sher-e-Kashmir Cricket Stadium, Sonawar being organised by Mission Youth in collaboration with Youth Services and Sports Department.
On the occasion the Chief Secretary urged the participating youth to not only play themselves but involve their elders as well.
He told them that participating in the game is more important than winning or losing the game. He made out that every participant is a champion irrespective of the result of the game he is participating in.
Dr Mehta observed that it is the happiest day for all of us to note that 38000 youth across all the districts of J&K have initially registered themselves for playing this tournament. He expressed that the government is targeting 33 lakh youth to play any game of their interest in the times ahead.
The Chief Secretary mentioned that it is the endeavour of the government to facilitate each person to participate in any sort of sporting or cultural activity. He declared that the Culture Department is soon going to organize the cultural events across the UT and urged everybody including the participating youth to take part in any of the cultural events like music, singing, dancing, painting, etc.
Dr Mehta maintained that the government has ensured that each Panchayat has a play field and youth have facilities close by to hone their sporting skills. He remarked that at present J&K has some 57 stadiums that are fully equipped to hold day/night matches. He encouraged the youth to play there after schooling and enjoy the true spirit of the game during night hours.
He also interacted with the players there and asked them about their interests and strong areas of the game. He enquired from them about the nature and quality of sports facilities available in their respective areas. He advised them to play well and give them his best wishes for their good performance throughout the tournament.
The Chief Secretary administered a pledge to youth about working against drug abuse. He inspired them to stop people from falling prey to drug abuse and simultaneously save themselves from this menace. He asked them to channelize their energy in making greater strides in their studies and sports. He told them to make it their objective to weed out this epidemic from our UT.
It was given out that LG's Rolling Trophy is a big initiative taken by the government to provide a platform for the Youth of J&K in the age group of 19 to 35 years. It was also revealed that the department of Youth Services & Sports has remarkably done well by achieving the participation of 13,84,993 youth in the games so far.
Regarding the trophy it was said that it would be played as per T-20 format and is being conducted on three tier basis. Tier 1 (Basic Level) is already complete as trials in Cricket have been completed in all the 186 Physical education Zones of the UT. From 186 Physical Education Zones, 38000 Cricketers had registered their credentials for this tourney, as was informed during this event.
Similarly in Tier 2 (Intermediate Level) zonal level teams selected by the experts will compete at District Level for the title. During the competitions best players will be selected and a District Team shall be constituted which will represent that District at UT level.
It was further given that in the final leg (Tier 3) of the trophy 20 teams, from 20 districts will compete at the apex level. The teams participating in the trophy at UT level will be provided boarding, lodging, refreshment, food and equipment. The Trophy has so far received huge response and sports lovers in general and Cricket enthusiasts in particular across the geography of UT of J&K have applauded this initiative of the UT government.