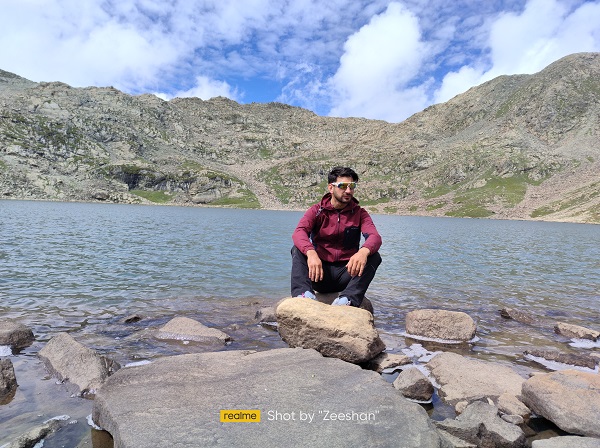 Dreaming is formulation of a thought and living the dream is taking that thought and implementing it into actions; Zeeshan Altaf is a practical example of this saying. He not only trekked every Sunday to chase his passion but also completed the target of climbing to 50 plus high-altitude lakes recently.
The 30-year-old Zeeshan Altaf, who hails from the Rambagh area of Srinagar city, aspires to climb Mount Everest, highest mountain above sea level, located in the Mahalangur Himal sub-range of the Himalayas.
The young trekker completed 50 plus lakes trek recently while traversing through greater lakes namely GadsarI, GadsarII, Damamsar, Bandsar, Bodsar, Pamsar, Kharagalisar, Chinamargsar, Lakutsar, Pathrisar etc.
“Trekking is my passion. It gives me immense pleasure that I completed the 50-plus lakes trek target. My happiness has no bounds and many more are yet to come hopefully,” Zeeshan told Rising Kashmir.
Zeeshan was accompanied by his friend Shafayat Ahmad during the trekking expeditions.
“We left from Tosamaidan on August 28 early in the morning at 4:30 to trek greater lakes and reached GadsarI at 8 pm, while traversing other greater lakes, and reached back to Tosamaidan Budgam at 8:45 pm,” he said.
Inspired by his friend, Tufail Qurashi, a famous trekker, Zeeshan started his first trek to Alpathar frozen lake in Affarwat Gulmarg. Later he joined the Jammu and Kashmir Mountaineering Adventure Club in 2014 and since then he has not looked back.
“Since then I explored 50 plus lakes including Barafsar, Nilnag, Durinnar, Trusar, Yemser, Khemsar, Alpather, Chuharnag, Shilsar, Gangabal, Nundkol, etc,” he claims, and added, “My dream is to summit Mount Everest and K2.”
He says he has summited Sunset peak (Romeshthong peak) the highest peak in Pir Panjal range with an altitude of 4745 meters above sea level located on the borders of Poonch and Shopian district, Sheen Mayean peak with an altitude of 4670 meters, the third highest in Pir Panjal range, Mahadev peak(3966mts), the highest in Srinagar.
The duo made it possible while facing the difficulties of inclement weather by passing several glaciers. Without bothering about challenges ahead to the summit they traversed the trek despite all hardships.
“We faced so many difficulties during this trek, like inclement Weather, and dipping temperature, but we still did manage to reach the destination,” Zeeshan Altaf told Rising Kashmir.
Zeeshan who has been into trekking for the past over seven years, claims that he has recently launched his own club namely Compass Crew Trekking and Adventure Club.
“I launched this club recently in June after repeated insistence of friends and some youngsters in our locality,” he says.