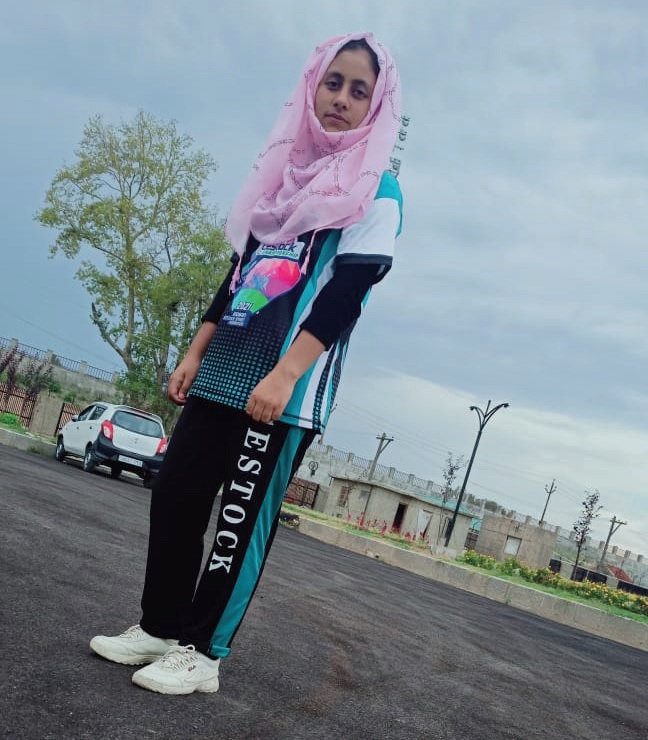 Practicing by clubbing the weight plates together, Zafeera Zahoor from Shopian is trying to break the glass ceiling with her ice stock techniques.

Hailing from Shopian, Zafeera studies in class 10th and has been versatile in playing a number of games since beginning. The new sports - ice stock caught her attention when the physical education teacher of her school introduced her to the game.

“The game was very new to me. We started practicing by joining the dumb-bells (weight plates used in gyms) together. Our teacher made us practice and encouraged everyone to give it a shot,” recalled Zafeera.

She has been playing the game for a year now and has won a slew of awards.In the 7th National Icestock Sport Championship in January 2021 at Gulmarg, she won 2 gold medals in Team Target and Team Game and 1 Bronze in Individual Long-Distance Event.

In the 2nd Khelo India, National Winter Games 2021 at Gulmarg, she won three Silver Medals in Team Game, Team Target and Team Distance and individually she achieved a gold medal In Long Distance Event against Ladakh.

"All my achievements have really helped me in my life. All this has made me capable of doing everything, gave me the factor of resistance to fight against every challenge and gave me hope that I can continue my journey with higher scoring grounds in the game," she said.

The upcoming event of Summer Nationals is going to happen in Karnataka and she is preparing for that.

She believes Ice stock demands the knowledge of the techniques. “The techniques are important to know for any player. Our coaches teach us and also hold our sessions with the renowned coaches of the game who pass their learning to us,” she added.

Physical strength is also important for the game, required to carry the stock of 5-8kgs and push with one hand.

Though it’s a new game, she said the infrastructure is good now. However, the players are not able to afford the stocks at individual level because of its high cost.

The scope of the game is huge and she said that the participation of girls is equal to that of men.

“In my family, my sisters and cousins are associated with the game. The senior players are also there and they are also playing well. Many got inspired by us and the number is increasing,” she said.

Like any other sport, there are many injuries that come in the form of muscle strain or slipping. The game is usually played in winters during snow season. She said that the matches are played at night at 2 a.m. because at that time, the ice gets frozen and makes it ideal for the stock to move.

“Due to the cold, the hand of the player gets numb and it gets really hard to carry the heavy stock, leave alone pushing it,” she added.

In Kashmir, there are 5-6 teams of female ice-stock players. Teams of four compete against one another.

“I found it a super inclusive and competitive sport. I have played a number of games. I have played state level three times in table tennis. Table tennis is a mind game, which fascinates me,” she said.

She is the first girl in the family who actively takes part in the sports and after her, her siblings and cousins have followed the same lead.

She said that females should participate in sports. “Games and sports are as important as studies. One has to be physically and mentally fit to focus on studies too. I want more girls from the village to come forward and play games. I have become an inspiration for the younger lot of the family. whenever I come home, I am always asked about the medals that I won,” she said.

With the participation in games, she said that she has improved her grades at the studies as well.

“Initially I was not good at studies but then I picked up and today I am the topper in my class. People have many aspirations with me and I hope to fulfill them all,” she said.