He is survived by an aged father, two daughters, the elder one is studying MBBS and younger daughter is studying in class 12th. 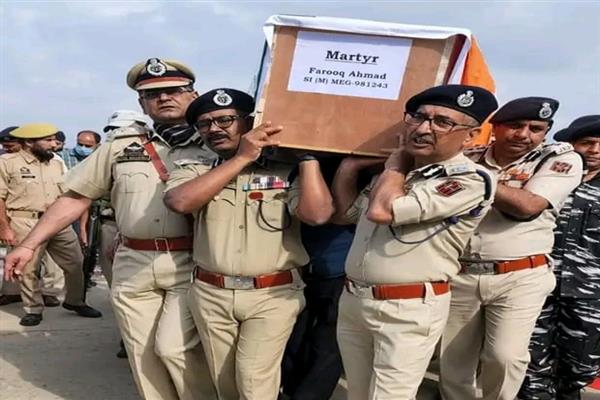 To pay tribute and respect to the martyr Sub Inspector Farooq Ahmad Mir who was shot at and martyred by terrorists on Friday late night, a wreath laying ceremony was held at CTC Lehtpora on Saturday.

Senior police officers and family members of the martyr led by ADGP Armed/IR J&K SJM, Gillani laid floral wreaths on the mortal remains and paid rich tributes to the martyr for his supreme sacrifice.

Farooq Ahmad Mir, a resident of Samboora, Pamopre was appointed in Jammu and Kashmir Police in the year 1998 as constable and in 2008 he after qualifying the departmental examination was converted as Sgct (M), in 2012 he was promoted as HC (M) and in 2018 he was promoted as ASI (M).

In December last year the officer was promoted as SI (M) and was posted as OSI in IRP 23 Bn. Last evening he was martyred by terrorists.

“J&K Police Pariwar pays rich tributes to the martyr and will stand by his family & provide all possible help and assistance to the bereaved family.