UT Govt is committed to ensure economic and social justice for all citizens: LG Sinha

J&K UT is a symbol of India’s unity & its greatness and we owe our strength to ancestors like Sheikh Abdul Jabbar Sahib. With their blessings, we have made impressive strides to socio-economic development and today J&K's growth is stronger than ever: LG 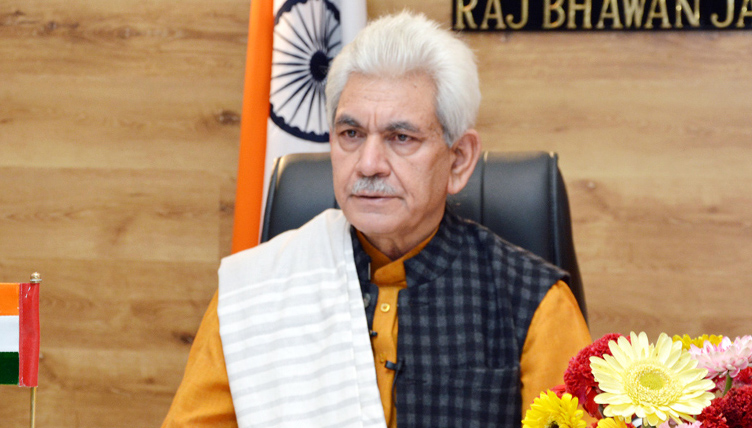 The event was organized by Sheikh Jabbar Foundation to commemorate the 32nd death anniversary of Sheikh Abdul Jabbar.

J&K UT is a symbol of India’s unity and its greatness and we owe our strength to ancestors like Sheikh Abdul Jabbar. With their blessings, we have made impressive strides to socio-economic development and today J&K's growth is stronger than ever, the Lt Governor added.

Speaking on the occasion, the Lt Governor highlighted the government's endeavours to bring transparency, accountability and efficiency in the governance system, besides reforms and policy decisions to accelerate unprecedented growth in sectors like Industries, education, healthcare, power, connectivity, infrastructure, sports , social security, self employment etc.

Public welfare reforms introduced by the government in the last two years are paying the dividend and people at the last ladder of development are receiving the benefits, the Lt Governor said.

Our objectives are clear- Social justice, equitable development and prosperity of all citizens. Welfare of our Tribals, workers, youth, women and farmers is evident in the various schemes launched by the government. I expect every section of society, especially youth to contribute to the economic progress of J&K’, the Lt Governor added.

Reiterating UT Government’s commitment to ensure economic and social justice for all the citizens, the Lt Governor said that the impressive turnaround in various sectors during the last two years has succeeded in improving the quality of life.

Violence and terrorism will achieve nothing. We must remember the sacrifices of the heroes of J&K like Sheikh Abdul Jabbar and tread the path of peace to establish a progressive and prosperous society, the Lt Governor added.

Addressing the public demand to rename government hospital and bridge after Sheikh Abdul Jabbar, the Lt Governor observed that the government has already decided to name infrastructure assets after all such great personalities who have contributed to upholding the unity and integrity of the country and prosperity of Jammu and Kashmir, and assured that the appropriate steps will be taken in this regard.

The Lt Governor appreciated the commitment of DDC Chairperson Ganderbal, Nuzhat Ishfaq and former Legislator, Ishfaq Jabbar for working towards the development of Ganderbal district and ensuring the welfare of people.

Last year, under Public Health Engineering in Ganderbal, 33 projects hanging for years were started. 75 Languishing projects were also started under District Capex and other schemes and all these projects will be completed at the earliest, he added.

Earlier, there was only one industrial estate in Ganderbal. Last year the administration had approved four new industrial estates and I am sure that at least 350 industrial units will be set up generating large employment opportunities for the local youth, the Lt Governor further added.

The Lt Governor also emphasized the need to make a collaborative effort for improving the literacy rate of girls, ensuring 100% saturation of Ayushman Golden Card in the district, besides instructing the District Administration to explore the possibilities of implementing various aspects of Sheikh Abdul Jabbar’s development draft.

The Lt Governor highlighted several milestones achieved by the UT government in different sectors by establishing fear-free, corruption-free and inclusive system of administration.

We have devised the scheme of setting up Self Help Groups to make women financially independent through Umeed program as a mass movement and more than 2000 such groups are being assisted in Ganderbal. It is my expectation that more and more women should be connected with self-help groups through the Umeed program, he added.

Former Legislator, Sh Ishfaq Jabbar, son of Sheikh Abdul Jabbar, threw light on the life and the public welfare works done by his late father. We will continue to follow the path laid down by Late Sheikh Abdul Jabbar and work for the betterment, welfare and integrity of J&K, he added.

A two-minute silence was observed in the memory of Late Sheikh Abdul Jabbar.