Tehleel Manzoor on mission to aware people about cyber security 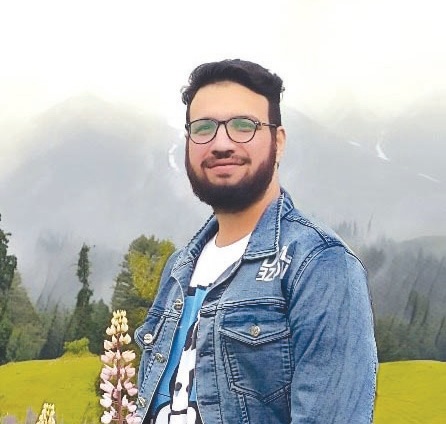 A young boy from Kashmir who is on a mission to raise awareness about cyber security and laws among the peoplehas so far written five books on the subject.
22-year-old, Peer Tehleel Manzoor is a cyber security researcher and for the past couple of years,he is raising awareness among people regarding cyber security in the region.
Tehleel told Rising Kashmir that people have heard about cybersecurity and its laws, but there is a need for mass awareness among the people regarding the same.
“The Internet is all too often considered as a safe environment for sharing information, transactions and controlling the physical world, yet, cyberwars are already ongoing, and there is an urgent need to be better prepared,” he said.
Hailing from Natipora area of Srinagar, Tehleel has completed his Bachelor in Computer Science Engineering from Punjab Technical University and is currently pursuing Masters from the same varsity.
“From the past several years, cybercrime is increasing in Kashmir and there was a need to aware people about these things, so that they will become smart users on internet,” he said.
Apart from his five books on cyber security, he has covered this topic comprehensively and is often seen speaking in workshops, webinars and conferences.
The books written by Tehseen includes Secure Locker (Smart activity Book), Cyber Security manual for teen’s, Virtual Menace: The little book of cyber scams, Unlimited Limits, and Humans Reaction: A key to social engineering attacks.
Tehleel encourages people for having strong passwords or a password keeper, and enable multi-factor authentication on sensitive accounts. “Strong passwords is an easy way to improve the cyber security,” he said.
In 2021, he received a Certificate of recognition from the Gurugram Police Cyber cell for the Cyber security Awareness Program, a Certificate of Excellence from PWR CLUB (Hackershelp) a Nonprofit Cyber awareness Organization and another certificate from Hacktify Cyber security: A bug bounty platform company.
Tehleel says there is good scope in cyber security in any part of the globe and it can also be opted for a fulltime career. Now there is a vibrant change among people regarding cyber security and I want to take it forward, he said.
“Cybersecurity is often not easy to explain, as there are many aspects. Hackers have the ability to move from one server to another to cover their path and origins,” he said adding that there is always scope to grow further.
Tehleel said there is need for joint efforts to work on the subject as future belongs to cyber and virtual world. Workshops, and conferences should be organized on this topic to raise awareness among the students, he said.