Rusklang: An uncut jewel of Kinnaur

‘Travel makes one modest, you see what a tiny place you occupy in the world’ -Anonymous 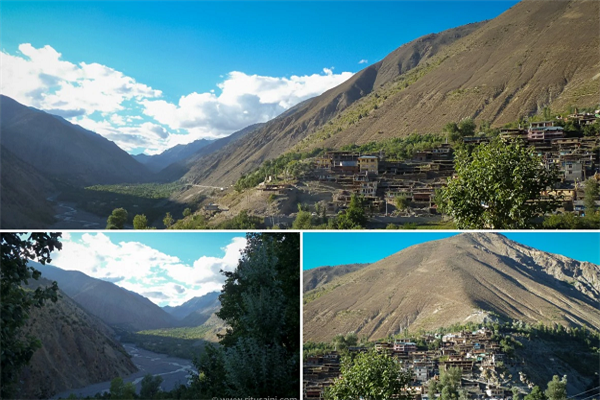 ‘As old as the hills’ is an oft repeated phrase, commonly used in our everyday talk and the same goes for the relations between humans and the mountains. A visit to the mountains act as an elixir in a man’s life ; casting away the everyday weaknesses and infusing his very being with nature’s blessings in the form of fresh air and a bountiful of nature  in every hue. India as a country is very fortunate for having been blessed with mountain ranges across its length and breadth in all her four corners. Blessed are the people, flora and fauna which are found in the close proximity of these mountains. Of all the mountain ranges ,the Himalayas in the north of the country rules the roost for its rich and varied topography casting an impressionable image on the lifestyles of the local population in all its forms. After having completed successfully the siachen tenure with my unit and the much needed rest and relief(R&R) at Leh, I was yet again ushered into an another equally pristine ,fresh and relatively untouched Himalayan territory of ‘Ropa valley’ in the distant district of Kinnaur forming part of Himachal  Pradesh. Kinnaur is one of the 12 administrative districts of the state of Himachal Pradesh in northern India with three administrative areas—Pooh, Kalpa, and Nichar with district headquarters at RekongPeo. The district is about 235 kms from the state capital of Shimla, located in the northeast corner of the state bordering Tibet to the east.

The district has mountain ranges like the Zanskar and the Himalayas that enclose the valleys of Sutluj, Spiti and Baspa. Entering into the Kinnaur district from anywhere else in India has to be via the famous Hindustan-Tibet road or NH-05(previously NH-22). Built by Lord Dalhousie, the then Governor General of India in 1850, it is one of the most treacherous roads ever built to date. The route from Delhi along with the distances between subsequent places are—Delhi--Shimla (360 kms)—Narkanda (420kms)—Rampur (488kms)—Karcham—(566kms)—Rekong Peo(587kms)—Kalpa(595)kms. At Karcham the route bifurcates towards the Sangla valley and later Chitkul. This ancient silk route passes through Kinnaur along the river Sutluj.  The valleys of   Sutluj, Baspa, and Spiti are one of the most gorgeous ones in India, with all three featuring many times in the national geographic cover page.  Having had the good fortune of being located in the valley of ‘Ropa’ near ‘Pooh’ of Kinnaur which is famous for shawl weaving, apple orchards and the finest metal artisians in the entire stretch of Himachal Pradesh makes you feel to explore the same with a missionary zeal and spread the word accordingly.

Most of the valley of ‘Ropa’ including Kinnaur is an inaccessible mountainous area cut-off from the rest of the world, that even in our sacred ‘Purans’ ,the living beings of this area were called as something between Gods and human beings they being so pure and close to the nature. Tucked away in this valley of ‘Ropa’ about 20 kms from ‘Pooh’ is the scenic village of ‘Rusklang’ with its spread weaving along the stream of ‘Ropa’. The locals of this area are called as ‘Kinnauris’ following Hinduism or Buddhism with a spoken language which is a mix of the Tibeto-Burman family known as Kinnauri and sporting a distinct green colour cap. Houses, streets and almost everything is made of wood and stone with the village populated by distinct Mongoloid featuring men, women and children. Warm and gregarious by nature the locals of Rusklang village are a treat to interact with. Rusklang, Giabong and Sunnam villages are some of the most authentic human settlements of district Kinnaur beckoning prompt attention from wanderlust. A small diversion of about 10 kms short of Pooh leads to the scenic place of ‘Ropa valley” with the stream of the same name flowing in all its serenity. On the banks of this stream lies the village of ‘Rusklang’ about 20 kms from Pooh with the stream meeting river Satluj on NH-05/22.

A very wide valley carpeted with apple orchards of the delicious variety and beautiful houses built in Kinnauri style welcomes you to the village of ‘Rusklang’ warming the innermost cockles of your heart. With plenty of time on my hands as part of area familiarization, left no stone unturned to make myself aware of this remote corner of India.The village of ‘Rusklang” / Ropa valley should be ideally visited either during the spring season or Autumn, when the weather is holding relatively dry and holding fast with good road conditions ready to take on the woes of a heavy influx of traffic from the plains. The area of Rusklang is a veritable mecca of ‘Delicious’ apples, chilgozas and Khurmanis. Almost all the apple orchards are owned by the’Negi caste’ making them one of the richest in this part of India. The enterprising orchard owners have installed wooden packaging assembly units in their orchards for quick and easy transportation of their produce across the major procurement centers of the country like the ‘Azadpur mandi in Delhi for their onward journey. In a similar manner the chilgozas and khurmanistoo find their way across the length and breadth of India.

The scientific manner of packaging of the produce has ensured their longevity and when combined with the timely announcements of the MSP (Minimum support price) by the GOI regarding the various varieties of apples and dry fruits ahead of the procurement season has ensured a windfall of profits for the orchard owners. The village of ‘Rusklang typically falls under the middle kinnaur area, which is an area between Kalpa and Kannum including the Moorang tehsil. Kinnaur can be divided into three distinct regions, with lower Kinnaur comprising an area between chora at the border of Kinnaur district with Rampur Bushahr and Kalpa including Nichar and Sangla valleys. The people of Rusklang village are primarily of Mediterranean physical types, belonging   to the Hindu religion though the ethno-religious cum historical factors have resulted in some Buddhist influence over them. The people of middle Kinnaur are of mixed mongoloid and other Mediterranean features. In some cases, there is an admixture of the above two in varying degrees. The upper Kinnaur area is quite simply populated by more of mongoloid race, usually following the Buddhist religion of the ‘Mahayana’ line. The society, as such in Kinnaur is quite simple with the least number of sub-divisions amongst them, primarily consisting of the ‘Kanets (Rajputs) and the scheduled castes.

The ‘Kanets are the main cultivating community in Rusklang village and use the honorific Negi. The scheduled castes in the district are mainly the ‘Chamangs ’and the ‘Domangs’. The chamangs are the traditional weavers and make cloth, whereas the Domangs are basically the blacksmiths. As far as the dress worn by the people in Rusklang area is concerned, it is mainly the woolens suited by the hilly terrain as obtaining in kinnaur. The head dress is typically called as ‘Thepang’ made up of light grey or white colour with a velvet band on the outer fold. Green, blue, crimson and yellow are other preferred colours by the locals. The women wear a woolen shawl called as ‘Dohru’ ,with a footwear made up of wool and goat hair and the sole made of goat hide. The houses in entire Rusklang area are made up of stone and wood often two storied with layers of ‘Bhojpatra ‘(tree bark) covered with earth. A first time visitor gets struck particularly by the food habits of the population of Rusklang area who rely on a mix of wheat, ogla, phafra and barley. The vegetables usually consumed are cabbage, turnips, peas, black peasand red kidney beans (Rajmash). As far as the spoken language is concerned, there are several dialects spoken by the locals. According to the classification of languages, made by the linguistic survey of India, Kinnauri comes under the Sino-Tibetan family of languages. This has been further classified as the language belonging to the western sub –group of pronominalized Himalayan group under the Tibetan-Himalayan sub family.

In the Shimla hill gazetteer of 1910, there is a mention of 3 dialects spoken in kinnaur which are Hindi, English and kinnauri. In addition to these there are various dialects of the kinnauri language spoken by the locals according to their topographical spread. The villages on the Tibetan border speak the Tibetan dialect of western Tibet. The extent of spoken Tibetan language is restricted to the villages of Nesan, Kenu and Charang adjoining Tibet. Being in the SFF comprising the Tibetan troops while in kinnaur it was not at all difficult to employ them as interpreters in negotiating our day to day tasks while building bridges of bonhomie and camaraderie with the locals.  The locals of Rusklang village spoke the Shumceho dialect of the kinnauri language which was like the lingua franca for my troops stationed there. Surprisingly, both men and women of the sangla valley and kalpa valley the adjoining areas can speak English as well as Hindi which is a rarity in this remote part of the country. With the gradual weaning away of the restrictions on the ILP (Inner line permit) by the GOI in kinnaur, there is a faster integration of people and places with the rest of India. Notwithstanding the above with the present Sino- Indian standoff still in vogue, it is felt that much more needs to be done in these areas as was the wont of British during the days of the Great Game.