Marking a historic day for the development of Tribal population of Pulwama, Lieutenant Governor Manoj Sinha on Monday inaugurated 5 projects including Model Tribal Transit Residential School, Girl Hostel, and laid foundation stone for 18 other projects for the welfare of Tribal Community in the district. 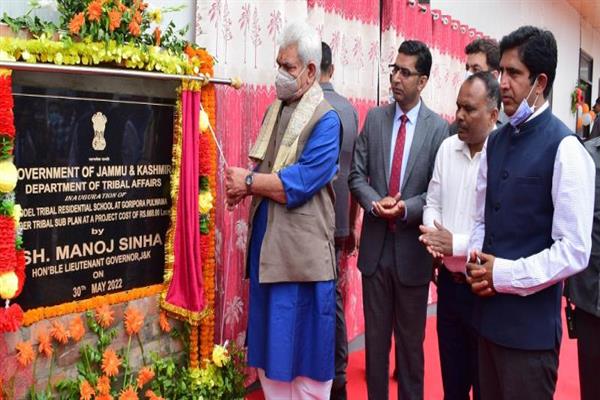 Marking a historic day for the development of Tribal population of Pulwama, Lieutenant Governor Manoj Sinha on Monday inaugurated 5 projects including Model Tribal Transit Residential School, Girl Hostel, and laid foundation stone for 18 other projects for the welfare of Tribal Community in the district.

The tribal population of Pulwama witnessed inauguration of projects worth Rs 11.47 Cr, and laying of foundation stones for new projects worth Rs 39.86 Cr aimed at development and welfare in tribal areas.
Speaking on the occasion, the Lt Governor said that the projects worth more than Rs 51 Crore are testimony to our commitment of Social Justice and Equality.
The Lt Governor underscored that sustained attention is being paid to ensure that quality education is brought within the reach of people who were long deprived of their rights. New hostels, smart classes and record number of scholarships for tribal students will open the doors of economic prosperity and all-round development, he added.
‘Between 1976-2020, only 26 hostels were established for tribal students, while 37 new hostels will be added by 2023. In the last 21 months, steps have been taken to ensure empowerment of all Marginalized & Weaker groups, the Lt Governor observed.
Noting that the Tribal Community in J&K was neglected and discriminated against since independence, the Lt Governor said that never before have tribal community prospects been as bright as they are today.
Forest Rights Act, PM Van Dhan Yojna, SHGs, Healthcare, Transport Facility, Hostels, Tourist Village, Skill Development, and every initiative has been aimed at ensuring progress of J&K in an equitable, fair and just manner, he added.
The Lt Governor said that the government is making all efforts to enhance the sources of livelihood for the tribal population. UT administration is setting up 100 Van Dhan Kendras in Jammu and Kashmir so that the tribal community can get the right price for the valuable products sourced from the forests.
He further announced the creation of 1500 Van Dhan Self Help Groups in the UT to make women of the tribal community financially independent. An amount of Rs 15 crores has also been made available, it was informed.
On ensuring access to quality and affordable education for the children of tribal community, the Lt Governor said that the UT administration has reviewed the scholarships of the students at various levels and hiked the same across the board in line with the contemporary realities.