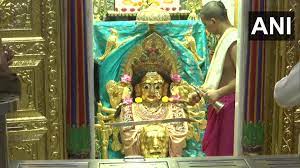 Today marks the eighth day of Navratri and devotees across the country will worship Goddess Mahagauri, the eighth incarnation of Maa Durga.

According to Hindu mythology, the eighth day of Navratri is dedicated to Mahagauri who attained "Gaur Varna" by rigorous penance. The name 'Mahagauri' means the one extremely bright. She mounts on the ox. Mahagauri appears in many forms.

During the nine-day Navratri festival, devotees worship Maa Durga's nine incarnations in order to obtain her blessings. There is a goddess manifestation linked with each day of Navratri. During these nine days, people maintain ritualistic fasts, recite shlokas dedicated to each goddess, wear new clothing, offer bhog, and clean their homes.

In their prayers, they ask the goddess for her favour in order to have prosperous, joyous, and fulfilled lives. Over the next nine days, devotees offer their prayers to Goddess Durga and observe fasts.

The festival of Navratri honours the defeat of the demonic Mahishasura and the triumph of good over evil. The 10th day of Sharad Navratri is celebrated as Dussehra or Vijaya Dashami.

This year, Navratri started on September 26 and will conclude on October 5.

Ramlila is organised extensively during Navratri in North India, particularly in Uttar Pradesh, Uttarakhand, Haryana, Gujarat, and Madhya Pradesh. During the Ramlila, the tale of Lord Ram's triumph over Ravana is acted out.

Numerous dances, including Garba and Dandiya Raas, are performed during the nine-day festival. While Dandiya Raas involves dancing with dandiya sticks to the beat of the music, Garba is a traditional dance in which participants clap their hands and move in a circle while making rhythmic gestures.

The effigies of King Ravana are burned on Dussehra to commemorate the triumph of good over evil. (ANI)