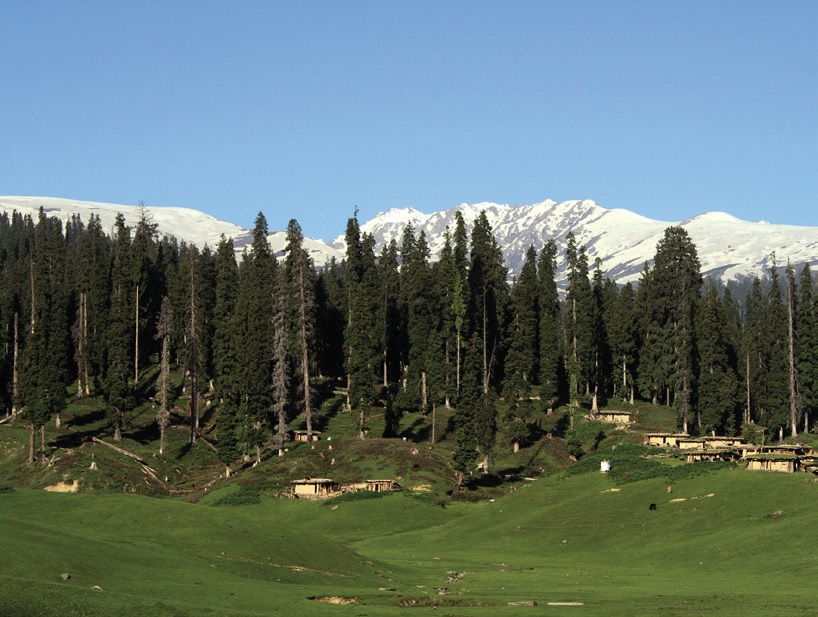 Namblan, a picturesque spot on fringes of Pulwama falling in Shopian Forest division, has everything to offer to visitors from sightseeing to pristine gushing water streams, from tall pine and fir trees to vast undulating meadows and pastures and from trekking routes to magnificent landscape of surrounding Pirpanjal mountainous range.
The most spectacular aspect of Namblan is its virginity and serenity which can only be experience by spending time at this place. It is for this reason that many people from different parts of Pulwama and surrounding areas camp this place during summers to known the nature from very close.
Namblan can be reached by taking Pulwama Abhama or Newa Pakherpora road. The route is motorable up to Kandpathri locality of Sangerwani.From Kandpathri a path leads to an elevation where one can park his/her vehicle.
A look from this elevation enables one to have a broad view of the mesmerising landscape, after descending the elevation one has to walk over wooden logs to cross Romeshi rivulet.
Thereafter, a 30 minute walk treading a steep path through beautiful green pastures leads to a bowl shaped meadow nestled between various mountain ranges. Locally this part of Romeshi Forest Range in Shopian Forest Division is named as Namblan.
It is dotted with scattered huts made of wooden logs and mud which are used by Nomadic Gujjars and Bakerwals who live there during summers for grazing cattle.
The walls of these mud huts have been adorned with beautiful hand paintings. Locals informed Rising Kashmir that they mostly use natural soil of different colours for wall paintings. Some use synthetic colours as well.
A class 12th student from this area, Nasreen, is credited by locals for starting this new trend. Her father Mushtaq Ahmad told Rising Kashmir that she learnt the skill from books and internet three years ago.She then passed on this skill to her close relatives including her aunts and gradually the trend spread in this area.
These beautifully decorated walls of Dokhis add value to visual attraction of Namblan.
Apart from Dokhis, two mosques have been built to offer prayers, the echo of Adhan in this bowl shaped small valley is the most spiritual experience.
There is a hot sulphur spring known as Tata Paani. Like many other such hot springs locals claim it has healing properties for joint pains and skin infections.
Living a day at this place takes one back to Kashmir of yesteryears. People live simple life and herding cattle.
They derive their livelihood from the woods. The women folk rear traditional varieties of chicken and some knit handmade skull caps.
“Wearing handmade skull caps adorned with red fabric is a part of Gujjar -Bakerwal tradition but now only older women keep it,” Zaina, an aged women at Namblan said.
The women here also make some delicious traditional beverages, dishes and other delicacies from pure cow milk including butter, Ghee and Kalari ( Moeshi Krej in Kashmiri).
Naturally grown Mushroom is also collected by women and is used to prepare a cherished veg dish.
Namblan is located at confluence between Shopian, Pulwama and Budgam district, on one side it has famous tourist spot of Yusmarg and on other side is Dubjan.
This place has a potential to be used a base station for trekking to upper reaches of Pirpanjal range.
People also uses Namblan route to visit Shidak where they pay obeisance at the Shrine of Janbaaz Wali(RA) .
The department of Tourism has built few huts around Sangerwani, which is the largest village of Pulwama, consisting of different localities including Bagh, Aditrag, Anderwali, Kandpathri, Namblan, Hill, Banjran, Chowtal and Sonbanjar.
Sangerwani has been identified as tourist destination by authorities under Tourist Villages Development Programme.
However, this part of the forest within Romeshi Range has tremendous pressure from local population. This has resulted in over exploration of green vegetation at certain places.
Divisional Forest Officer Shopian Forest Range, Mohammad Ayoub, told Rising Kashmir that the department has proposed to develop few ecotourism parks in the area on their own.
“Besides we have opened a tracking route from Anderwali to Churkhal,”he said, adding that they will also be opening another route from Chota-Namblan to Shidak on instructions of Deputy Commissioner Pulwama, Baseer ul Haq Chaudhry for promotion of adventure tourism.