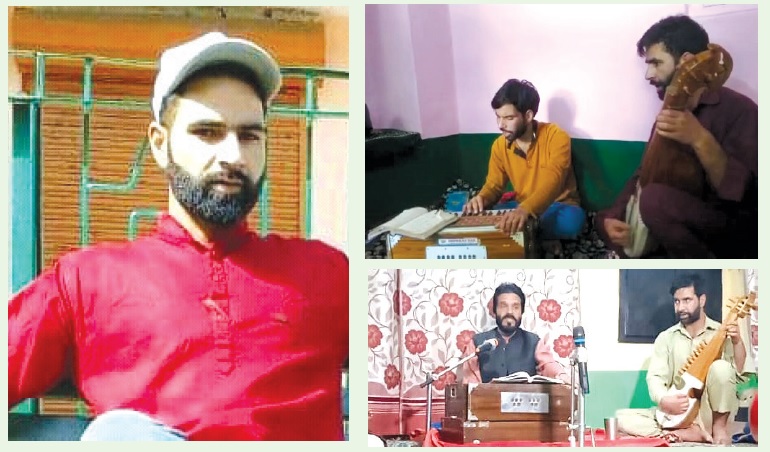 Imran Nazir Parray, a young sufiyana singer from Central Kashmir’s Budgam district, is taking forward legacy of sufiyana singing of two generations of his family - his father’s and grandfather’s generation.

Hailing from Badran village near Magam town, Imran was inspired by his grandfather and father who had been associated with traditional sufiyana singing and music.

His father was a Sarangi Artist while his grandfather was a sufiyana singer who had earned name and fame from all quarters.

The 25-year-old artist developed interest in sufiyana music from childhood. “After passing 10th class I started practicing sufiyana singing and learning the musical instruments. I have been singing since then. For some time, I sang in weddings but I stopped that two years ago,” he said.

At present the tradition of performing in Mehfils is a rare case. Nowadays, whatever sufiyana Mausiqi people listen, it is through medium of radio and through stage performances.

Presently, Imran is a rabab artistcum sufiyana singer and performs sufiyana music on different occasion be it sufiyana mehfils, religious places like shrines (on important days) and other events.

While performing in mehfils, Imran said people still like sufiyana music and people give positive feedback and they like it when we sang professionally in the traditional way.

“When we go to places people receive us with immense love. It is the love of people for sufiyana music that keeps us alive. Notably, I have seen more young people attending to our musical programs which is encouraging,” he said.

Imran said his teacher Abdul Majeed Ganie, a popular sufiyana singer, has taught and guided him for a long time. Besides that, he has also learned music from Manzoor Ahmad Parray, a noted singer and continues to learn from him.

“Those youth who are interested in music by heart should come forward and take guidance of seniors,” he said adding that Kashmir has a deep-rooted connection with Sufism as the place is called the ‘Land of saints’.