Game-changer Raja Saleem inspires others to chase their cricketing dreams 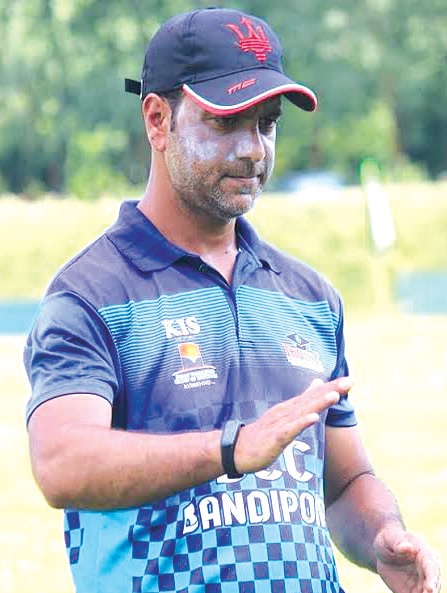 Suffering from back injuries when he was competent at international levels to fighting all kinds of odds to captaining the district's dominant cricket team, Raja Saleem's story is a unique one.
Hailing from Bandipora, Saleem started his cricketing journey twenty six years ago and has not only been actively playing cricket but is also teaching the cricket tricks to the budding players.
Saleem got back injury when he was making his place at International levels. He didn’t gave up but, the fought well and now is a coach of many youngsters who want to make their future in cricket.
“My story begins here from 1996 at the sports stadium Bandipora. I went to Delhi where my national career began. I played Ranji, County cricket and also played UAE 'A' League," said Saleem while celebrating the win against Srinagar at Sports Stadium Bandipora.
Despite his obvious promise and potential, Raja failed to find a permanent place in International cricket due to the back injury and limited himself to home cricket at the playground where the journey of the cricketer started.
"In 2001 I played for U-19, in 2003 and 2004 U-22 and in 2005 I got selected for Ranji Trophy and played there. But due to injuries in my dorsum, I could not play further and stopped playing cricket for a long time", Raja said.
Later, he not only played for himself but he also opened a cricket academy to train the budding cricketers in the game so that these young budding players can get a chance to progress.
The long winters in the valley stop budding enthusiastic players from playing and they remain out of touch from the pitches and game which becomes the cause of not performing well when they get back in touch with the cricket. Saleem is making an indoor pitch for the youngsters on his own which shows the players love for the game and his love for the budding cricketers.
"The work on indoor nets is going inside a school building which I own because in winters our boys remain out of touch with the game and they are not able to perform well in the big matches. With the help of this indoor pitch the boys will practice the whole year helping them to perform well in the big games'', Saleem added.
Despite being in his forties, Saleem still plays cricket like a young boy and is known for his extraordinary batting. The way this cricketer of a very gentle nature guides the young generation for the development of cricket, his role is commendable.