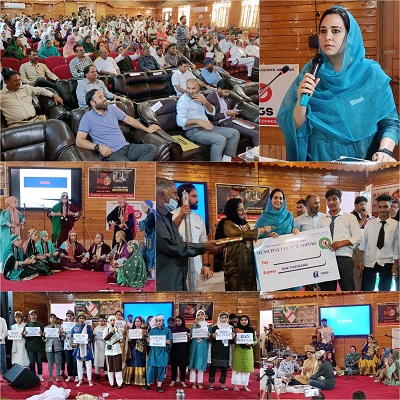 Baramulla: Sep 16: An event was Friday organized by Municipal Council Sopore in collaboration with District administration Baramulla at Government Degree College Sopore wherein different activities were carried out to make people aware with regard to Nasha Mukt Bharat Initiative.
Deputy Commissioner Baramulla, Dr Syed Sehrish Asgar was chief guest on the occasion and Director Urban Local Bodies Kashmir participated as Guest of Honour.
President Municipal Council Sopore Masarat Nisar Kar, President MC Baramulla Towseef Raina, SSP Sopore and other officers were present in the programme.
Speaking on the occasion, the Deputy Commissioner said that the purpose of organizing this event was to generate awareness among the masses, especially youth about the ill effects of drug abuse so that they can live drug free lives and can become creative and important members of society.
Addressing the students, the DC said that adolescents are very vulnerable to falling prey to drug addiction. She asserted that teachers and parents must be cautious and maintain vigil on their children's activities.
She further said that early intervention is critical in preventing the youth from becoming addicts adding that with firm determination of students and joint efforts by all stakeholders, this menace can be eradicated from the society.
Several other speakers shared their views regarding the harm effects of drugs and highlighted that it one's moral obligation as well his/ her duty to the society to help end this menace from the society.
Meanwhile, in a bid to revive the old cultural tradition in the district , a special Band pathar was organized on the occasion which got quite applause from the participants. Other cultural activities were also present on the occasion meant to spread the awareness regarding the ill effects of drugs.
Later, the DC distributes commendation awards among those best performing students who presented different cultural items on the occasion.