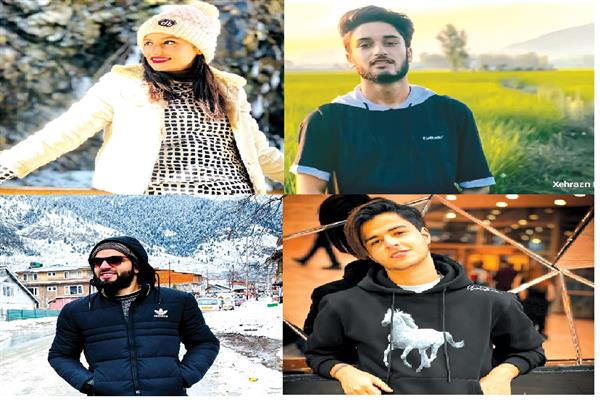 A generation of topic, an appeal to the audience for a cause and a voice to thoughts is what the digital content creators practice every day.

Empowered and backed by a set of audience, content creators of the valley are not only engaging in passive interactions but are also leading a way to the evolution of numerous opportunities for the coming generations.

Eighteen year old, Xehraan Rafiqfrom Awantipora is a youtuber ,filmmaker and a student. He runs a YouTube channel "Xehraan Films"and that is how people know him.

Xehraan started his journey in 2018 when he was a school going student. He always wanted to be a filmmaker and create a difference. This passion made him come up with a youtube channel.

"Youtube is a platform that gives you various opportunities. I want to be a filmmaker and a photographer and for these I always found YouTube very suitable for learning and sharing my work. Once the content gets uploaded, we learn, we develop and we sharpen our skills. For me, youtube helped me improve my skills.This was the reason I started with youtube. In addition to this I also wanted people to know me

so that I get work", said xehraan.

His YouTube channel has more than 14.7k subscribers.In his videos, the main focus remains on filmmaking but with filmmaking he makes documentaries and does vlogging as well. He was inspired by few film makers including Peter McKinnon and Ruman Hamdani.

"My content is usually based on my travels to different places , I prefer cinematography and so far I have shot some music videos and documentaries as well," he said adding "I want to make people understand that filmmaking is also a way of earning livelihood and I also want to explore different places in and outside kashmir as well."

Like everyone,Xehraan also had his ups and downs.It took him one and a half year to gain 1k subscribers.

"I remember I had done a food vlog on khayam chowk , that video got some 50k views and after that I started getting recognition.Then steadily my journey made me reach 10k subscribers and now 14.7", said Xehraan

There are times when Xehraan gets demotivated but what keeps him going is the love that he gets from people and the support from his parents.

With the motive to spread positivity in the society, in 2021, Umar Iqbal, a 4th year medical student studying in Bangalore, started his YouTube channel “The Umar” and is followed by more than 53k people.

"The first thing I keep in mind while making my content is that I spread positivity and smiles among the people. Every work has both positive and negative sides and it depends on the one what side he shows. I have some videos based on Kashmir in Bangalore, like making people repeat kashmiri lines with me and a video on pheran and another one on everyone's favorite- noon chai .My main motive in these videos is not to show clothes or stuff like that but to show how kashmiri people are.My videos always try to show that a good human being is safe anywhere he goes", said Umar.

"I have videos on travel without money, both in Kashmir and Bangalore to show that people in both the places are good.I remember a video in which I purchased many things from people who needed financial assistance and got comments like, I should have done that in Kashmir but I believe we should keep our vision on the whole world and one should keep helping others wherever he is", he said.

He says that his biggest inspiration is his deceased mother who taught him to do right with everyone and to be sober despite of the other person's ill intentions.

Another content creator whose content resonates with his lifestyle is Raja Faheem khan. Hailing from Srinagar,Faheem is a student who started his YouTube channel "Faheem Vlogs" in 2018.His channel currently has 28.2k subscribers but his journey required him a lot of confidence and self belief.

"I started my channel in 2018 but back then people did not know about vlogging,so as a consequence of this I used to get a maximum of 100-200 views and these views used to be of my relatives only but then in march 2021,I started vlogging with a consistency after seeing some vloggers from getting a good response.I admit the fact that I too started getting a good response from people and my friends Xehraan and murtaza helped me a lot,” Faheem said.

Faheem's content makes his viewers know about his daily life.His parents support him but like every parent,they too are worried for him. "Although my parents support me, my father says that I should maintain a balance."

Faheem's passion and pursuit for vlogging made him start his channel.He did face criticism in the beginning but with time he made his place.

"Vlogging was my dream. Earlier, I faced a lot of Criticism. There were times when people very close to me also insulted me.Some people used to annoy me and say ‘hello guys faheem vlogs is here’ but now things have changed,"he said.

For Faheem,vlogging was not so easy, since he hesitated speaking in front of people.

"I used to hesitate while speaking in front of people but then one day when I just had 50 subscribers,I had a chat with Murtaza (another vlogger) and he told me I should not fear anything while speaking and also said, if you feel something goes wrong then retake the shot.I kept that thing in mind and I remember taking many retakes for a single video but today I don't need any retakes", Faheem said.

His most viewed video is his song "Show off" which has gained more than 2 lakh views in 4 months.

Faizul Mazoor, a BSC student is Kashmir's first female vlogger who makes her content for the sake of development of kashmir. She is know to people through her YouTube channel “Faizul Vlogs”.

"After my 12th, I started making vlogs. I watched videos of many vloggers and tried to imitate them.I shooted my first vlog in Mumbai and at that time my parents did not know about it," Faizul said adding “my mom has been my constant support.”

Her content promotes tourism of Kashmir. In her videos,she explores different tourist sites of kashmir for which she was always fascinated.

"I travel to different tourist sites,give feedback and also try to make people understand how things should be handled. For instance, recently I made a video at the airport and in that video I made people understand what all documents we have to keep with us and what all is needed there.I gave a description of everything. I feel only if one tourist comes to kashmir because of me, that's enough for me ", said Faizul.

For her, content means something that makes her learn. She faces some obstacles in making vlogs but believes in rising above them.

Apart from vlogging, she does fashion shoots and has been a part of T-series as well.