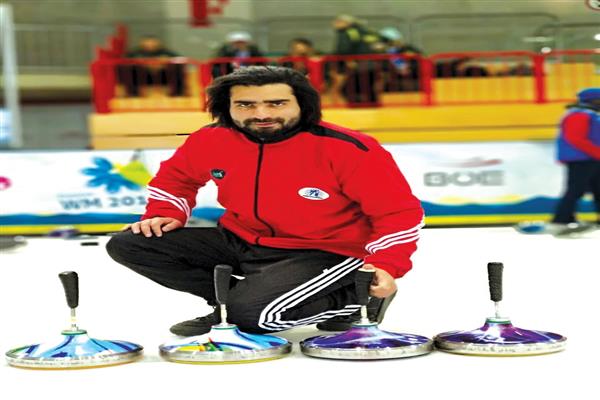 Known for consistent moss shots, Faheem Shah is an Indian International Ice stock sports player. Apart from winning many national gold medals, he is a record holder for being the first gold medallist in the country. Also, he holds the distinction of the most consistent performer in the history of Indian Ice stock sport.

Hailing from Batmaloo Srinagar, Faheem has represented Indian, J&K, Apollo teams and many clubs in this sport. He has been the captain two times of the team who went for an international competition.  From the very early days of his life, he witnessed the sports obsession and while watching his brothers playing and discussing conventional sports, his obsession started growing.

While pursuing engineering in computer sciences, he would actively participate in sports and has been a national Rugby player too. “I never let my sports activities hamper my studies as both are important. It’s better to take sports and studies parallel rather than sacrificing one for the other,” he said.

Talking about rugby and ice stock, he said that the rugby is a contact sport which demands more aggression whereas ice stock is a passive but very competitive game.

He said, “In Kashmir we are all cricket or football fans but Rugby has had a huge impact on my life since I started playing it. Remembering my starting days in rugby back in 2006-2007, I was very energetic and impulsive like every other sports enthusiast so rugby suited me well. It helped me control my emotions and understand the process of hard work and teamwork but later Ice stock came and it paid off well and it being an Olympic sport was enough for me to jump into and start living the Olympic dream.”

Having a versatile interest in sports, he was introduced to the game of Ice- stock while being on one of the snow Rugby matches during the winter of 2014 in Gulmarg.

“After finishing our game, we came to know that there is a new sport being introduced by JK Tourism Department Kashmir and a European man along with some sports officials are holding the demonstrations,” he added.

Many players found it interesting and reached Gulmarg Ice rink and as many people there knew them as rugby athletes, they were invited to try their luck. “I had fun with stock and liked it very much. I was able to make some good shorts,” he said.

He heard someone from behind clapping and appreciating him for his shorts. Little did he know that the man was none other than Manfred Schafer from Austria, the then President of International Federation of Ice stock. That moment offered him enough encouragement to step into a new incredible game of ice stock.

Having played numerous international matches with teams of different countries, he said that he came across some of the tough opponents as well. As a debutant, he played his first match against Namibia in which he fared well.

“I definitely was very nervous before the match. I had done all the practice and meditation required but when you are on the pitch it’s a different experience. You need a big heart and courage to stand the giants,” he said.

In the end, it was Namibia who won the match but the match became an important one in his career. At the end while shaking hands with one of the Namibian players, Faheem was told that he played well which was a happy moment for him that boosted up his confidence for all the upcoming matches.

Despite enjoying full support from his family, he had to face societal pressure and was also told to choose between studies and sports.  “In my varsity, where I was studying I was even once told to make a choice between sports and my semester exams. Some friends and close relatives mocked and said that I am wasting my time after sports and it can’t earn me anything.  Such words are demolishing and demoralising but then a sportsman has to stand and work on his skills further, therefore I carried on to play sports,” he said.

In the future, he has plans to continue playing ice stock. Currently he is preparing for the ice stock European championship to be held in October and November. “There are other private links also where we are interested to go but due to the lack of funding and sponsorships, we are not able to go,” he said.

Believing that a little help from sponsors can help in the upliftment of the athletes, he said, “Sports are not only for entertainment but can be a tool for social change. The athletes are very talented and all we need is a little bit of support which can create a scenario of sports in Kashmir and many youngsters can go for it,” he said.

“Thanks to the J & K Sports Council, improvisations are very much visible but more needs to be done definitely and it goes for athletes as well. I have witnessed myself how some players just feel happy to damage government property and smirk proudly after doing it. We all are the products of this society; it’s our responsibility to take the beacon in our hands and walk shoulder to shoulder with the authorities,” he said.