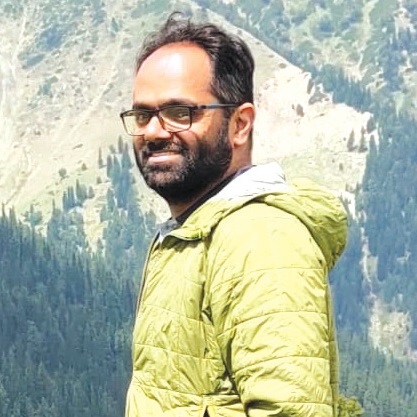 Bashir Ahmad Mir, a 40-year-old artist, can neither speak nor hear. But, his painting brush tells stories on canvas, loud and clear,while surprising people with his unique talent.

The artist who was born a deaf and dumb hails from Ratnipora village of Tangmarg in north Kashmir’s Baramulla district.

Bashir expresses himself by creating magic on canvas. From painting culture to beautiful landscapes, he is adamant about using his talent to record daily life in Kashmir.

His painting are mostly about Kashmir’s old traditions, culture, sufism, landscapes, farming, birds, animals and routine chorus of ordinary people. He has been drawing attention to himself by narrating tales of Kashmir through his artwork.

Few years back, he made a painting of Baba Reshi shrine, the three-storey monument and tomb named after Baba Payam-Ud-Din, which was widely appreciated by the people. One of his paintings on Tulip Garden Srinagar and Dal Lake are among the most liked paintings.

Bashir, father of two children, is always seen with his painting work. He can make any kind of painting within no time.

“He was interested in painting from early childhood. He would always get inspired when he would see any painting on walls or on newspapers and magazines. Once he got married, he started making more and more paintings that surprised us. He is a God-gifted artist,” said Bashir’s brother, Abdul Majeed Mir.

Being a person with disability since birth has not deterred Bashir from pursuing his passion for painting and drawing attention to his artistic endeavors.

“Capturing a region’s essence, from its naturally scenic landscape to its culture and that too on canvas is not a task easily achieved. It requires years of practice, diligence and determination to hone such a skill and raise it to the level of art,” Abdul said.

Bashir’s son Haziq, 13, said he realized his father’s paintings when he was 10 years old. “In my early age, I learned to communicate with him and learned sign language. Now, I have realized that he is the artist who is rarely found,” he said.

Through his artwork, Bashir has won many hearts and it can be measured by the regular visits of the people from nearby areas to his house to see his unique paintings.

“He has been able to convey his feelings about and love for Kashmir and Kashmiris through his paintings. Many people give him orders for paintings and my father surprises them with beautiful and unique product,” said Haziq.

His family and friends vouch for his paintings as he started his journey as an artist in his childhood, but it was only after his marriage that he became truly obsessed with it.

“There is not a moment during daytime when he does not have a painting brush in his hand and paper to draw something about Kashmir,” said Haziq.

The art of painting is the most expressive and lively medium for human feelings and creative impulses. Paintings are essentially fragile works that rarely have longevity, especially in a region like Kashmir, which has unsuitable climatic conditions.

At his home, Bashir has kept dozens of paintings in a room filled with thought-provoking art works and he keeps adding more frames to it. He has also painted portraits of some well-known personalities including Mahatma Gandhi and Altaf Bukhari.

To earn a livelihood for his family, Bashir works as a casual labour in the Cable Corporation of India (CCI) at Gulmarg. He got the job just because of his artistic talent. There have been several occasions when he wanted to give up his job, which just pays him a monthly stipend of Rs 7, 500.

Haziq said his father earns a maximum profit of Rs 1000 per painting, and anything other than that takes care of expenses. “Even if he earns or not but he is passionate about his work and makes paintings with commitment and dedication,” he said.

Many people have been impressed and inspired by Bashir and many young students and artists who have thrived in their careers have learned painting from him.

“There is a famous painter in Kunzer Tangmarg area who has also learned painting from my father. He would come to our home to take classes and he became a successful painter. There are also many examples of painters from other villages and areas of Tangmarg who have learned painting because of him and have done wonders,” he said.

Haziq demanded that the government should also promote his father’s paintings and save the artwork in a museum that will give a boost to his talent.

“What he lacks is the government support or platform. He wants to work in some school where he can teach and train deaf-mute students who are interested in painting which he often talks about,” he said.

In addition to painting, Bashir has a great interest in sports and plays cricket in a nearby playfield. The artist has also made a team of deaf and dumb persons of his area and he encourages them to play cricket and take part in other activities. He is the captain of the same team.