We want to serve nation, have high hopes: Agniveer aspirants 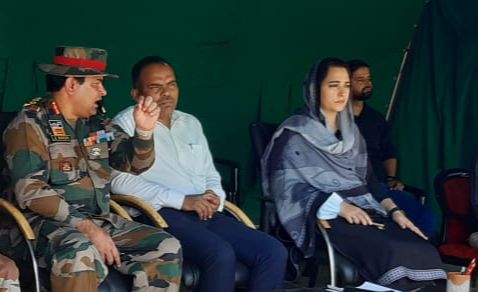 Pattan, Sep 19: In an ongoing Agniveer recruitment rally in north Kashmir’s Baramulla district, a large number of aspirants from different parts of Valley on Monday said they have high hopes from army enrolment and wanted to serve the nation.
Abrar Ahmad, a 22-year-old from Kangan Ganderbal told Rising Kashmir that he is the first among his entire family aspiring to join the Indian Army.
He came to Pattan, a day before the recruitment drive so that he can reach the venue on time.
"I want to serve the nation. Although I have tried my best to keep my body physically fit. I have confidence that I will be selected as Agniveer and it is a lifetime opportunity,” he said.
Abrar says from the past several years, he was waiting curiously for the recruitment rally. Today is a big day and I hope that I can make it, he said.
Like Abrar, dozens of aspirants from various parts of Kashmir are participating in a recruitment rally for male candidates of 10 districts of Jammu and Kashmir and two districts of Ladakh that began on Saturday.
Another aspirant, Faisal Ahmad 22, a resident of Pulwama said it is a golden opportunity for youth to serve their country for a minimum period.
“We have no expectations of Jobs from the civil administration, each day scams are surfacing in recruitment drives. The main motive for joining the Army is that they have a clean and open process of selection where there is no favoritism,” he said.
Faisal says his brother who works in the Police department inspired ‘him’ to join the Armed forces.
“My brother helped me in running, physical tests etc. I hope I will act as per expectations,” he said.
On Saturday and Sunday, hundreds of aspirants from Budgam, Shopian, Pulwama, and Ganderbal districts participated in the recruitment drive.
Mushtaq Ahmad, a local villager from Yadipora told Rising Kashmir that the entire Hyderbeigh playground was full of vehicles from south Kashmir who had come to participate in the recruitment rally.
“There was no space left for morning exercise, even roads were full of vehicles,” he said.
A senior Army officer told Rising Kashmir that they are getting a good response from the Agniveers over the past two days.
“There is josh among the youth and Agniveer recruitment will open a new chapter among the Kashmiri youth,” he said adding that drive will continue till 27th September.
The Army officer said the recruitment drive goes through multiple rounds and it usually begins with document verification in the early morning. During a day, three large groups of aspirants are being allowed, he said.
As per Army's Defense Public Relations Officer, recruitment for UT of Jammu and Kashmir and two districts of UT of Ladakh is underway at Haiderbeig, Pattan. It is being conducted by ARO Srinagar.
On Monday, Div Commissioner Kashmir, Pandurang K Pole, accompanied by Dr. Syed Sehrish Asgar, visited the rally site and were briefed on the conduct by Director Recruitment, Army Recruiting Office, Srinagar.
He later interacted with the candidates and motivated them by highlighting the benefits of the scheme, especially to the youth of JK.
"Candidates from Shopian, Pulwama, and Ganderbal districts of UT of J& K were screened Monday for recruitment into the Army," PRO said in a statement.