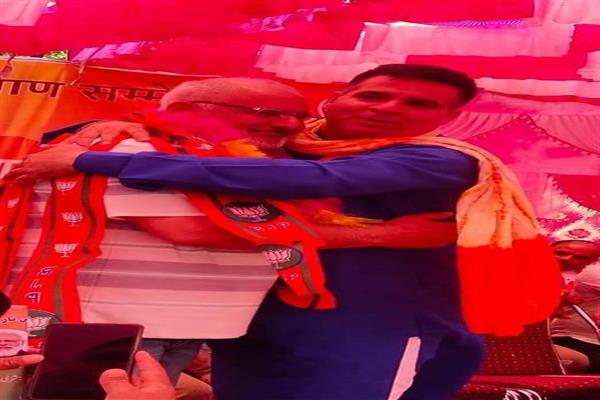 Speaking on the occasion, Sh. Ravinder Raina welcomed the new entrants into the BJP family. He said that Mohd Qayoom Mir was a top Congress Leader who has very stong hold in Pahari Community in Rajouri & Poonch area.

Sh. Ravinder Raina said that the Modi ji has made a permanent niche in the hearts if co.mon masses and the people have developed string faith that Modi ji will transform the Nation into major power house of the world. He also threw light on various development works initiated by the Prime Minister Narendra Modi led Union Government for the betterment of Jammu and Kashmir and the plethora of schemes that have benefitted people on the grass root level.

Adv. Vibodh Gupta welcomed the new entrant into the party fold and spoke on the achievements of Modi government and particularly the schemes providing benefits to the people of Pahari belt. He also spoke on the various programmes being conducted in the region on occasion of the completion of 8 years of people friendly Modi government.

Sh. Kuldeep Gupta threw light on the importance of strong organizational structure in the region.

Iqbal Malik spoke in the unprecedented development that has taken place in Rajouri under the string leadership if Modi ji.

Talib Choudhary stressed in the role if BJP in the upliftment of all the communities of the region irrespective of region or religion.

Sh. Rajinder Gupta presented the note of thanks.