Tackling on and off pitch, women rugby is surging 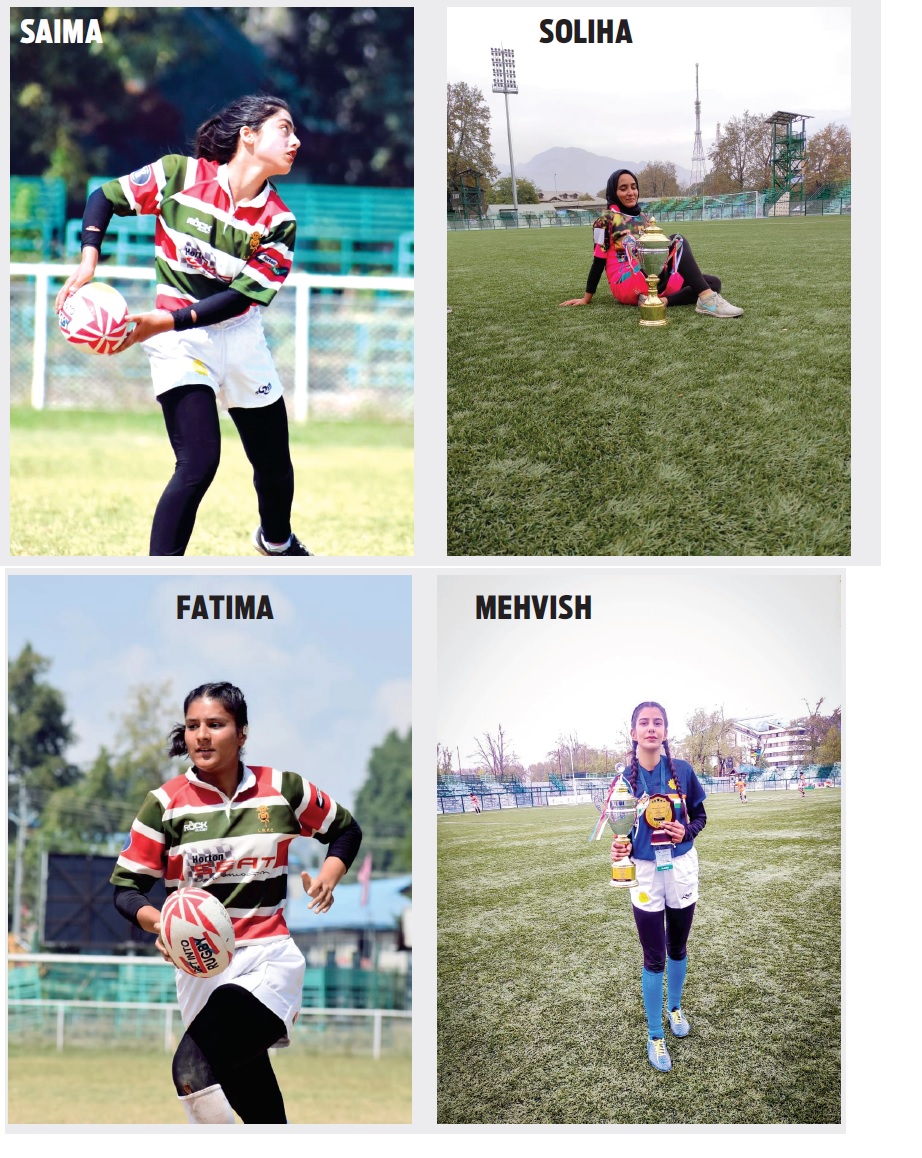 At 6:30 a.m., a group of girls make their way towards Gindun Stadium in Rajbagh and practice hard on the ground. Tanned face, muddy uniform and dirty hair is what female Rugby players of Kashmir carry every day but what concerns them more is their passion and enthusiasm for the sport, Rugby. The players are tackling situations on and off ground and pushing to the best of their abilities.

With dedication and hard work, recently, a women's team played the National championship in Bihar. Many kids had their first nationals and it was a good learning experience for them.

The captain and coach of the Rugby Women Team, Soliha Yousuf has been into this power sport for years now.

Being good at a number of games, she played cricket, volleyball, football and Badminton at school level, Kho Kho at national level and finally she found herself at the Rugby pitch.

“Rugby chose me. When I stepped into the sport, it was still novel though there were girl teams before me. I had no idea how far it would take me. Even my parents used to tell me to switch sports but with time, I found my reason to be there and then there was no looking back,” she said.

She has witnessed the revolution in the sport from struggle in building a team to selection process for choosing the best among the crowd of rugby enthusiasts. The game has shown potential growth and is gaining momentum now, she said.

Under her captaincy, the team has won a number of championships. One of the national championship matches was held in Gulmarg in 2017, where the team won a gold medal. Not just the victory was memorable but the response of the local audience was what she still cherishes.

“It was an important match of my career. It was held in my hometown. The players were in pressure but we got a huge response from our people. I have seen criticism throughout my career but at that moment I realized that we have made our place in the hearts of people and they enjoy Rugby as much as they enjoy football or cricket,” she added.

In Khelo India Youth Games, the team under her captaincy, won a bronze medal and has won shields in many national championships.

Also, the team got to play a national championship among the top 17 teams of India in 2015.

In 2010 and 2011, Soliha got selected in Rugby India Camp and became the first girl from the valley to hold the position twice. Behind that success has been a mountain of hard work.

“When you work hard and you get the results, that motivates you to work harder. My goal is to get selected in the international team. I want younger generations to go into sports. It's better to go in sports as it will offer multiple benefits,” she said.

However, the Rugby like other sports had gone off the track during the covid 19 pandemic, but she tried to connect with the players to focus on fitness.

She said, “During that time, we held online sessions for exercises and we would meet and talk to each other virtually. The sessions used to be full of fun. During that time, many players left and I never saw them again. Many people couldn’t regain the fitness which became difficult for them to make a comeback.”

Still, female participation is less as compared to the males but every year the number is increasing and is catching many eyeballs.

In 2017, Kashmir hosted Khelo India Snow Rugby competition in zero degree conditions in which the team won a bronze medal.  “We had nationals in snow rugby too before that. We knew how to run and get up back in snow as we have been living with it and this became our advantage. In snow, the body is cold and if you get hurt, it takes much time to heal,” she said.

As rugby is a contact sport, aggression is a part of it. Soliha said that the rules have been changed over the years and more safety factors are added for the players but the aggression on the pitch comes automatically.

For some, perceiving Rugby is how they perceive their life, tackle the opponent and chase for the goal.

Fatima, a national Rugby player from Srinagar said, “Life and Rugby are very much similar. You have to tackle many things to carry forward your aim. Pushing your limits is required on and off pitch.”

She has been playing ice-stock, Kho Kho and takes part in athletic activities as well but has stuck to Rugby. Often told to give up the ‘fighter’s sport’ and ‘risky sport’, she would never listen to what people say.

“I don’t listen to what they say. I have my parents' support, especially my mother’s. I want to make my place in the international team and I am ready to give it my time, energy and effort,” she said.

She believes that a rugby player should be disciplined and must possess strength and stamina. Because of her coach Soliha, she got into the game and has been a part in four national championships.

Sharing her first match experience, she said, “I was super nervous during my first match but it was certain that I have to be in the game and help my team in every possible way towards win. Despite the huge pressure, you have to stay calm. This sport gives us joy.”

She is told by her family to go for the Nutrition course in future but she has made her plans of making a future in the world of sports.  Currently pursuing graduation from women college MA Road, she often sees more girls on field than in class.

“Everybody is taking sports parallelly along with their studies. The two can go together as sports have huge opportunities to offer. We can compensate for our studies by managing some time,” she said.

Another national player, Saima was in her school when her attention was grabbed by a group of girls on the ground, shouting, ‘my ball…my ball…’

She got hooked up with the game and it’s been 4 years now, she finds herself enthusiastic as she was on her first match.

“I found the game very interesting and something where you can pour your emotions. I play other games too but Rugby is my passion. I would prefer it over any other game,” she said.

The ground is the place where her mind is free. Though she has faced injuries many times, she keeps going with the flow.

“When we go to the field, we don’t think about injuries. When my nose got injured, I got up in the very moment, continued playing and supported my team. This is how it is. Just move forward with or without bruises,” she said.

She has to undergo foot surgery in the coming days and said that she never tells her parents about her injuries unless it is a serious case.

“I feel injuries are part of every sport. When my family sees my medals, their worries, questions and queries go away. Whenever I get a medal at home, my family gets very happy,” she said.

Though the society is indifferent towards the women players playing the male dominated sport but their family has been their support. Every Sunday, Saima’s father tells her to get ready for practice.

“My father has supported me and my mother gives a good reply to all those people who raise their eyebrows at my game,” she laughed.

According to players, the infrastructure for the game is developing in Kashmir. Currently the pitch at the polo ground, which is said to be the biggest Rugby pitch in Asia, is under construction and the new playground at Elahi Bagh has a separate pitch for Rugby which has motivated more players to make their way in the sport.

Mehvish Rashid, another national Rugby player said, “Had we not performed well, we wouldn’t have come this far. We have given our blood and sweat to the game and the bar is raised by the female players. I have personally improved a lot.”

Four years ago, a group of players went to schools to promote Rugby amoung students. There Mehvish Rashid got into Rugby and has been playing ever since.

But things were not that easy for her. Comments were made by people on her uniform and tanned skin.

“Initially people had a lot of issues with our uniform. Once you are in sports, you dress up like that. You are not supposed to be on the ground in kurta pajamas. One has to go in a sports uniform. People used to make comments on our parents as well. Some people ask about injuries and skin tan but we realized that what matters most is how successful we are,” she said.

Currently, the practice takes place at Gindun Stadium, Rajbagh thrice a week and matches are played between the teams every Sunday.

Having a lean physique, Mehvish believes that mental sharpness is also required along with strength and agility. She said, “Earlier I thought, I won’t be able to make my position in the team because of my lean physique. I started it as a passion but it has now become a part of my life.”

After playing in four nationals, she believes that her team is way stronger than the previous teams and are ready to deliver the best in the game.

“More girls are coming every time. This chain will go on and will not stop which is a good sign for the development of the sport. Rugby is an important part of my life. In the two hours of my day, I give my best and the world around me ceases to exist. It’s just me and my game,” she said.