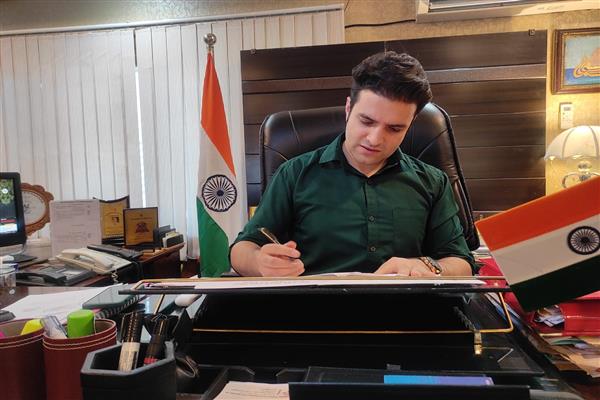 Srinagar, Aug 05: Residents of various parts of Srinagar city are complaining about a range of problems ranging from proper drainage to macadamization, Srinagar Municipal Corporation (SMC) Commissioner, Athar Aamir Khan, speaks to Rising Kashmir's Special Correspondent Jahangir Sofi about the problems, their solutions, and proposals to address them.

How is SMC addressing the complaints, and grievances regarding inadequate drainage and unsurfaced roads?
There is no denying that there will be grievances but, the corporation's objective is to address them and to the best of our ability, resources, and people, to redress them. However, there are two more significant concerns about the grievances that I would want to address. We efficiently address issues related to our regular services such as sanitation, brush cutting, registration, construction permits, and other services; nevertheless, some grievances have financial repercussions. Roads in poor condition are being resurfaced, but many additional roads need resurfacing or maintenance, and they will be addressed in upcoming plans and projects.
Road macadamization has been a concern, what has been done by the SMC to address the issue?
As far as road macadamization is concerned, SMC has a road stretch of 2200 KMs, of which around 60 roads have already been approved for necessary resurfacing and have been tendered out. Of approved road resurfacing, 20 road stretches in various Srinagar parts have been completed. Making or resurfacing roads involves financial implications and the process is done as per the priority parameters and availability of funds and resources.
A few hours of rainfall lead to inundation in many city areas, What is SMC doing to handle the crisis?
As far as the drainage in the city is concerned, we are preparing a ‘Detailed Drainage Master Plan’ for which we have already hired a consultant to know how much drainage infrastructure, and capacity is needed. We are also looking at ‘Gravity Flow’ to find out how much drainage can be achieved at the maximum. What we know so far from the plan is that we need a stretch of around 1200Kms, which is a major infrastructural challenge. Over the past couple of years, we have also made a significant up gradation in the existing network of drainage systems in many parts of the city under Atal Mission for Rejuvenation and Urban Transformation (AMRUT) and Jhelum and Tawi Flood Recovery Project (JTFRP). Under this project capacity of around 50 dewatering was upgraded, and the drainage system has also been upgraded in areas like Bemina, Khomani Chowk, Malla Bagh or Lal Chowk, and other areas.
Waterlogging not only in low-lying areas but also in higher plains is an issue in the city, how is SMC dealing with this challenge?
As of now, we have around 85 permanent dewatering stations and kept around 107 mobile pumping stations that are being operated as per the requirements. Along with that, we have kept 107 mobile units in a buffer which are being used during situations arising of any emergency. We have made an arrangement of around 12 sucker machines for the areas pumps cannot be installed or have outflow issues with the new emerging situations. We have also started doing the ‘Vulnerability Mapping’ of the areas which witnessed maximum inundation in the city to rule out the reasons if there may be a blockage, if any drain is to be connected with the main drain or if there is a need of any new drain and that is simultaneously being prioritized.
SMC started a drive against encroachment on roads and pavements, is it yielding results, and has anything changed on the ground?
The drive against encroachment will continue, it is all about applying civic sense and I believe that it should not come and prevail through enforcement. People should not think of their comfort by placing other people in discomfort. Meeting the encroachment challenges there is a proper synergy with other departments and enforcing agencies. Meanwhile, we have made 2-3 vending zones and we are in process of shifting them.
As Commissioner SMC, would you like to give any message to the people of Srinagar?
I would like to appeal to all the citizens of Srinagar to be more proactive in making Srinagar City cleaner, likewise, they are concerned about their homes or their workplaces. There are good people around but a smaller percentage of people is not cooperative for whom we wish the existence of civic sense among them. I would reiterate, that Civic Sense should not come through enforcement, rather it should come out of concern.
People should not resort to the encroachment of the roads, as they are meant for public use, not for anyone’s personal or commercial use. I would again appeal to all the people of Srinagar to keep the city clean with special emphasis on water bodies as it takes a lot of effort to keep them clean. And those who do not cooperate in making the city smoother and cleaner, will of course invite action against them as per the relevant laws, which I would again not like to happen.