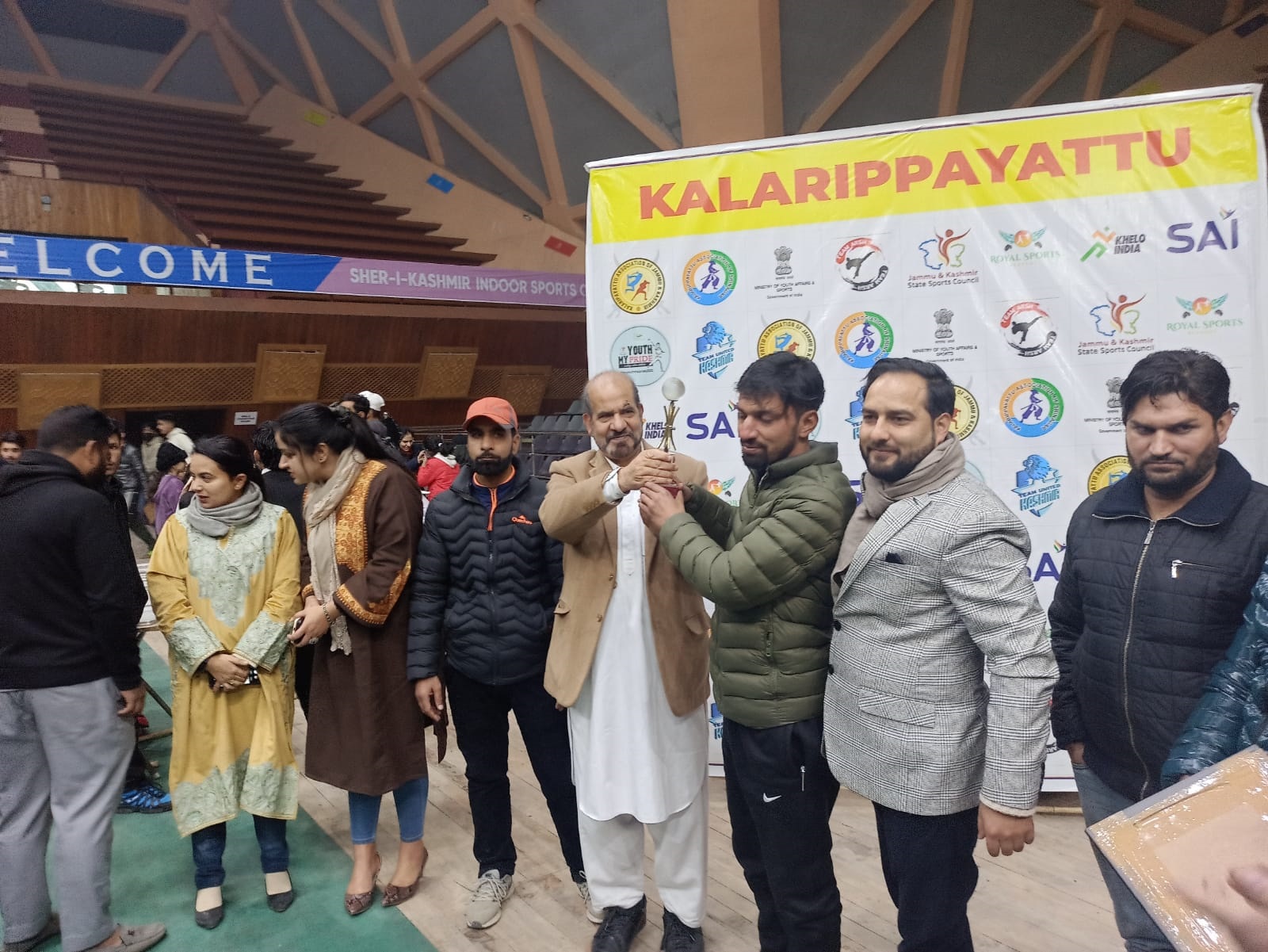 Srinagar, Dec 04: A grand function of world-famous Indian martial art – Kalaripayattu – witnessed a jam-packed audience of highly talented youth at Indoor Stadium, Srinagar on Sunday. The event was attended by Khwaja Farooq Renzushah, Chairman Jamaat Aitqaad Hanafiya and Chief Commissioner JK Scouts & Hindustan Scouts; Bilal Parray, national-level youth icon and member of high-level national executive; and Chairman International Delhi Public School Showkat Chowdhry.
The students from IDPS, Convent and other educational institutions were honoured with Gold, Silver and Bronze awards. Arshad Aziz was appreciated for convening the championship.
Khwaja Renzushah suggested renaming the Indoor Stadium with Sheikh-ul-Alam Stadium saying that “valley’s saints have always blessed Kashmir’s new generation for all round success of bringing home laurels”.
While delivering a keynote address on the occasion, Khwaja Renzushah appreciated Bilal Parray, Showkat Chowdhry, Arshad Aziz and the entire staff of IDPS for “reviving the original martial art representing the 700-year-old civilisation of Kashmir” and their “zeal to build Srinagar as a special city of creative art”.
“My Kashmir Society International and Scout organisations have always patronised martial art in Kashmir as this game has originated from the valley,” Renzushah said, adding, “In various functions organised by Kashmir Society International, the ambassadors of the Central Asian countries have acknowledged the fact that martial art of Kashmir has a rich history.”
Khwaja said that Kashmir Valley was conceived to be an abode of art & culture under the shadow of faiths of mutual love and coexistence. “The last 700 years of history of Kashmir has been scripted in golden words as an abode of communal harmony and champions of art & literature,” he said.
“In spite of attempts by radical and communist radicals to erase the art, literary and intellectual history of this valley, the grand martial art still remained alive like our literature and education,” Renzushah said, adding, “The events organised by Kalaripayattu have silenced all those who had started believing that art, literature, education and martial art are dead in Kashmir”.
Khwaja recalled how through JK Scouts Tajamul Islam was discovered on the platform of martial art. He hailed Bilal Parray for getting Tajamul Islam, who brought Gold for India in martial art, honoured by the Home Minister of India on October 4, 2022, which he said, “is a big & prestigious acknowledgement of high physical art & skill of Kashmir”.
Bilal Parray in his speech acknowledged that the sports and art culture of Kashmir is being hailed at the national level. “I am inviting the Union Sports Minister very soon to Kashmir for announcing a sports package for the youth, particularly the martial art, for which the valley has become the organic abode of true human treasure which made our country proud at the world level through sports activities,” he said.
Later on, the guests distributed trophies among the participating schools.