We have developed a strong sports culture in J&K; Our aim is to harness the talent, nurture it and provide the best training and exposure: LG 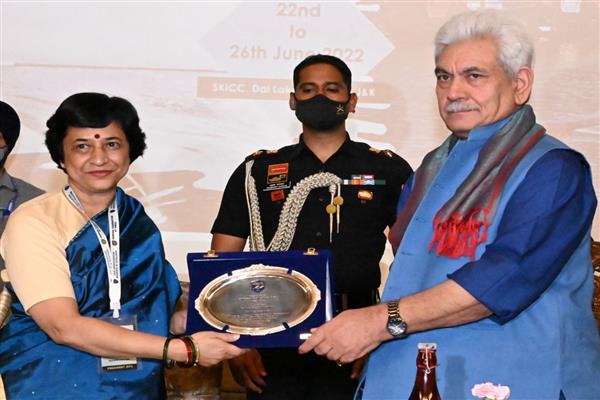 Addressing the participants at the inaugural event at SKICC, the Lt Governor extended his invite to each member of the sporting fraternity, from across the country, to enjoy the warm hospitality and the spectacular games.

After the First Chess Olympiad Torch Relay on Tuesday, this is another historic sporting moment for UT of J&K. This National Rowing Championship will provide a unique opportunity for young sportspersons from all over the country to display sporting excellence and share the camaraderie and sportsmanship,’ observed the Lt Governor.

Initiative like Target Olympic Podium Scheme (TOPS) and Khelo India has given wings to the young generation. It has given the perfect opportunity to the players to target Olympic medals, the Lt Governor said.

Lauding the leadership of Hon’ble Prime Minister for establishing a vibrant sports culture across the country, the Lt Governor said that in last two years, UT Government has paid special attention on developing sports infrastructure and providing sports facilities to youngsters in rural areas. Our aim is to harness the talent, nurture it and provide the best training and exposure, he further added.

The Lt Governor observed that Sports institutions were established in blocks, districts and divisions to channelize the unlimited energy and potential of our youngsters.

‘Earlier, one lakh players used to get the opportunity to play in a year. Last year the number increased to 17 lakh and this year 35 lakh players are expected to participate in different disciplines of sports across the UT. In order to ensure equal opportunity, 50% participation of girls is being ensured in the talent development program. We are treating the entire process as a movement to groom the future generation,’ he further added.

‘Every day around 400 children including girls are being imparted specialized training through this Water Sports Center. In the last three years, our players have won 100 medals in national level competitions in kayaking and canoeing and many players have also represented the country in international tournaments’, the Lt Governor added.

A water sports center like Srinagar is also being built in Basohli in Jammu division, which will be equipped with state-of-the-art infrastructure and facilities.

No one else will decide your success or failure. You are the master of your own fate. Move forward and be the leader of tomorrow, Lt Governor told the participants.

Ms Rajlaxmi Singh, President Rowing Federation of India while speaking on the occasion extended gratitude to Lt Governor for his support in organising the National Rowing Championships-2022 in J&K. She said that the region has immense talent pool in the field of sports with many sports persons are making their mark at the international level. Dal Lake has the potential to host international level water sports events, she added.

Motivating the participants, Ms Singh said that Rowing rewards patience, humility and hunger to succeed and asked them to give their best during the championship.

On the occasion, Oath was also administered to the participants to abide by the spirit of the game.

The teams will compete in different categories in the course specially made for the championship in Dal Lake.