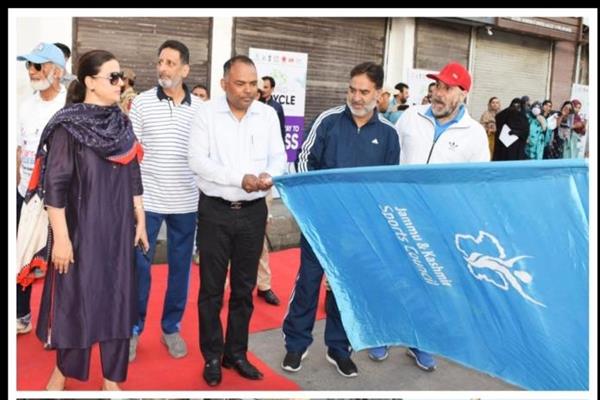 The cycle rally was organised by J&K Sports Council in collaboration with the Department of Youth Services and Sports and Nehru Yuva Kendra.

Addressing the participants at the historic Ghanta Ghar Lal Chowk, the Div Com who was also the chief guest on the occasion appreciated the initiative of the Sports Council to celebrate the World Bicycle Day.

He said besides being a sports activity, cycling carries a huge socio-economic and environmental message. He also said that such unique initiatives should be organized more often, adding that the purpose of this rally is to create awareness about cycling among people so that cycling becomes a daily routine for fitness and a measure to safeguard the environment.

Lal Chowk, the starting point of the rally witnessed a huge rush of cyclists in the wee hours and from here the participants pedaled via M.A Road-TRC Signal-Dalgate-along the embankment of Dal Lake up to the Cheshmashahi Crossing and finally culminating the rally at Botanical Garden Parking.

Many hydration points were set up en route in Srinagar to keep cyclists hydrated.

The rally witnessed a massive participation of cyclists, with more than 300 cyclists pedaling in the rally besides 50 officials from other departments including officials of the Sports Council led by Nuzhat Gazala, Divisional Sports Officer Central, and other employees from the Department of Youth Services and Sports besides J&K Police and J&K Bank.

Though the United Nations General Assembly had declared June 3 to be celebrated as World Bicycle Day in 2018, in J&K the day was celebrated for the first time today.

Addressing the athletes at the culmination of the rally at the finishing point in Botanical Garden, Srinagar, Secretary Sports Council, Nuzhat Gull highlighted the role of frequent cycling in reducing the carbon footprints on planet earth.

She said, if we pledge not to use our vehicle for just two days a week, it means we are saving planet earth from the onslaught of CFCs for around 104 days, and imagine hundreds of thousands of people sticking to this routine can play an important role in limiting the impact of greenhouse gases on mother earth.

She also said that sports is a major tool to keep drugs and other social evils at bay and save our future generation from falling prey to such evils thus paving the way for a prudent society.

The Secretary Sports Council extended thanks to all the government departments who coordinated the event, especially J&K Traffic Police, Directorate of Health Services J&K, Municipal Corporations of Jammu and Srinagar, J&K Police, and all others.

Many participants speaking on the sidelines of the event also gave their bent of mind. Young Tabish wants roads for cyclists. He said we need roads without any hindrance from manhole covers and heavy traffic. He also advocated for a three-foot cycle lane so that cyclists enjoy riding in their designated space.

A 48-year-old banker, Basharat Qureshi demanded decent cycling infrastructure with dedicated cycling lanes if not in the entire J&K but at least a track to paddle on in each district of the union territory.