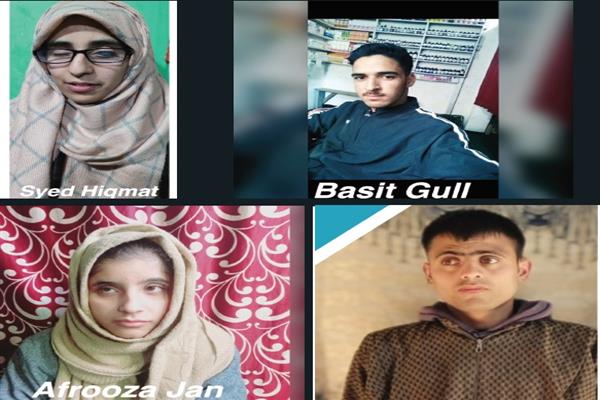 In the recently declared matriculation examinations, the specially-abled students have achieved good results, showing that they are no less than anyone. Despite some physical disabilities, they got good percentages and grades.

From Doru, Verinag, Syed Hiqmat Yaseen, a visually impaired girl has passed her exams with 85% marks. Studied at Sir Syed Memorial Public School, she said that the school was a place for normal kids and she was the only special child. But her teachers never made her feel she had a weakness.

“My teachers worked hard on me and gave me proper time to understand the concepts,” she said.

Hiqmat said the principal of the school supported her and always appreciated her talent. She said, “Ashiq sir really supported me and fought for me at times when people asked him how I, being a visually impaired student, can study with other normal kids.”

Hiqmat has been receiving huge support from her family as well. “Most of the specially-abled students are not in a position to study because their family don’t support them but thankfully my parents never left me and never did any discrimination with my other siblings who are normal,” she said.

Talking about her studying process, she said she used to record the lessons on her phone. “I would take my phone with me and record whatever my teachers would say. Also, when I used to encounter any doubt, I used to call them personally,” she said.

In the future, she wants to be a teacher and work for specially-abled students. She said, “Being a student, I have to struggle a lot. When I used to go to local teachers for coaching, he would feel hesitant in teaching me. I want to teach disabled students and work for them, especially for visually impaired ones.”

Having no eye-sight right from childhood, she said that she has accepted it even if it is a disability. “People call us specially-abled, people with special needs but I have accepted that this is a disability and these are just names given by people. Despite disability, one has to work and work for others as well. If a person wants, they should not stop working for it,” she said.

Studying braille till 8th class, she passed her exams without Braille. “my timing for studying would always start from evening till night. That has been my routine since childhood,” she said.

In her free time, she listens to and reads Urdu novels and story books.

Another visually impaired girl student, Afrooza Jan from Kokernag has secured 369 marks in her examinations. Studied at Government High School, she has passed the examination with the help of her brother.

Having a belief that education is important for all, she wants to be a teacher and imparts education to all the people like her. She said,

“Teachers help us a lot. They teach us discipline and make us better human beings. There must be many like me who are struggling with education. I want to help them and teach them.”

She has been visually impaired since childhood and her father who is a labour by profession took her to a number of doctors. “We went outside Kashmir as well for treatment but the doctors said that it wouldn’t be treated but I am thankful to God that despite being visually impaired, I am able to move, do other things on my own and maintain hygiene,” she said.

She is thinking of taking Arts as a subject. Having a melodious voice, she likes to sing hymns in the praise of God.

Her message for society is that people should stop taking drugs and should not waste their lives on drugs. She said, “Parents give their life to their kids and I want them to say that they should work hard and do something good.

Another visually impaired student from Pattan, Shabir Ahmad has never gone to tuitions but has done self-studying from YouTube. Studying at Devar High School, he said that he has done smart work during his examination. “I used to study only for 4 hours but with full concentration. I used to give some time to exercises too and to my hobbies as well,” he said.

Being very fluent and bold in speaking, he further added, “It’s the smart work that matters otherwise everyone does hardwork. In future, I want to do a degree in computer sciences as I am fond of gadgets and technology.”

He said, “I am thankful to the Jammu and Kashmir Handicapped Association (JKHCA) and National Association for the blind. The associations have helped me as my family. Abrar sir from JKHCA has provided me with a laptop from DC Baramulla and has always lent his helping hand.”

He said that the government should provide facilities to specially-abled students in schools and colleges. “Facilities are not provided to us in schools. People are very insensitive towards us and they don’t treat us properly.  There should be awareness among the general public and all the visually impaired persons should think that they have to achieve something and make a good life for themselves,” he said.

When Basit Gull’s result was announced, his house reverberated with celebration. It was a big thing for his family as their both sons are specially-abled and celebrating little events is their way to celebrate their loved ones.

Hailing from Anantnag, Basit Gull has speech and hearing impairment. He has studied at Government High School Kreeri. Guided by his elder brother Isaq Gull, who is a graduate, Basit would spend most of the time with his studies. Basit had appeared for the 10th examination with a helper who wrote the papers for him.

Isaq is excited to get his brother admitted to higher secondary school. “I want him to study more and prepare for some reputed exam,” he said.

Isaq feels that specially-abled people are discriminated against in society. “The schools don’t pay much attention to such students. The specially-abled students have the same rights to life as any other normal students,” he said.