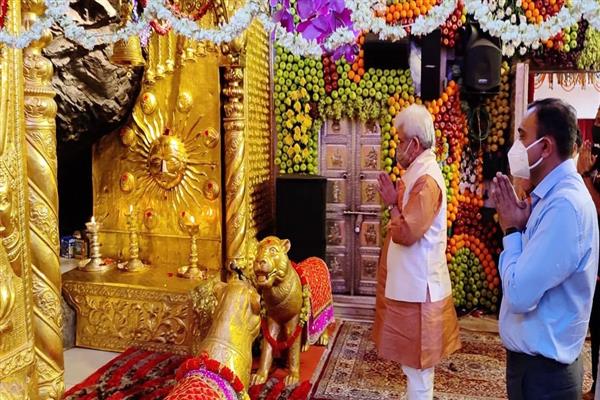 The Lt Governor also released the biography of well-known entrepreneur, J C Chaudhry, who facilitated the making of the bhajan and web-series on Maa Vaishno Devi.

The Lt Governor congratulated the family members of Ramanand Sagar and CEO, SMVDB for contributing to the making of Bhajan and Web Series on Maa Vaishno Devi.

Speaking on the occasion, the Lt Governor extended his wishes on the auspicious occasion of Navratri and prayed for peace, progress, prosperity, and well-being of the people.

Underlining the significance of the pious days, the Lt Governor said that nine days of Navratri inspire us to move towards the Vedic way of life. He said that the values of Yoga and Meditation are being adopted all across the world and people are getting familiar with different aspects of spirituality.

The Lt Governor further said that the Prime Minister Narendra Modi has taken the spirit of ‘Vasudhaiva Kutumbakam’ to people around the world.

Talking about the great strides J&K is making in the different sectors, the Lt Governor said that the upcoming Katra-Amritsar-Delhi Expressway will make the journey towards Katra more convenient for the pilgrims.

“In the last one and a half years, Jammu Kashmir has created new records in infrastructure development across every sector. Around One Lakh Crore is being spent to transform infrastructure in the UT. In the last 180 days, around 80 lakh tourists have visited J&K”, he added.

On the occasion, the Lt Governor congratulated J C Chaudry on his biography and said that his life story would inspire many young minds to do hard work and excel in their life.

J C Chaudhry while speaking on the occasion shared his personal story of success and expressed his deep devotion to Shri Mata Vaishno Devi Shrine.

The Bhajan released today has been sung by renowned Singer Sonu Nigam and the teaser of the web series on Maa Vaihsno Devi was also shown on the occasion.