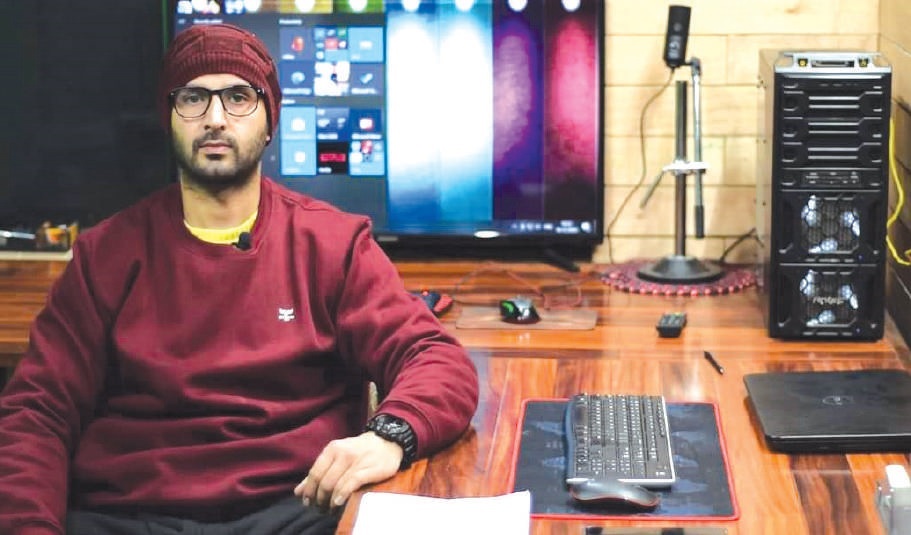 For the past two years, Sajad Aziz Khan, a content creator from Kashmir is earning appreciation for highlighting social issues, raising awareness and speaking about trending technologies on social media.

Born and brought up in Uri town of north Kashmir’s Baramulla district, Khan pursued his formal education in Srinagar and is presently working in Education Department. He is popularly known by his Facebook page ‘Khan Speaks’, which has gained unique recognition among the people.

Khan told Rising Kashmir that he started creating content in late 2020 on the topics that were somehow related daily lives of people.

“I was getting good feedback from the people and they were praising my content. After some time, I started making videos on prevailing topics and trending technologies in society that went viral on social media,” he said.

Khan said he has earned 65 thousand followers on his Facebook page and most of his content has generated views in lakhs. On YouTube, he has few thousand subscribers to his channel.

“Earlier I used to share my content with others on social media platforms. The content was widely praised and appreciated by the people. Later I started to upload it on my own social media accounts,” he said.

Khan says he focuses on quality and responsible content. The aim is aware people in the right way rather than mislead them with false thumbnails, he said.

“I am trying my level best to improve my content each day. From shooting, advanced editing, and adding animations and graphics to it. I am managing it single-handedly,” Khan said.

He says the niche of his content is current hit topics, social issues, and technology. Social platforms enabled individuals to build a large audience and reach their fans directly, Khan said.

“Earlier my area of concern was only Kashmir but now I am expanding it to other regions. We have to keep informed audience about the trending issues across the world,” he said.

He said although social media have given benefits of easy connectivity and increased information, but it has also become a vehicle for disinformation and mental stress.

About highlighting social issues, Khan says that the main aim of any content creator should be to aware, entertain people and not mislead them by various methods.

In his message to aspiring content creators, Khan said they should focus on quality content and not upload anything wrong to gain views on social media.

“It is our society and we have to build it in a good way. We should use social media as responsible citizens. If we upload anything and defame each other, it will have adverse effects on our society,” he said.