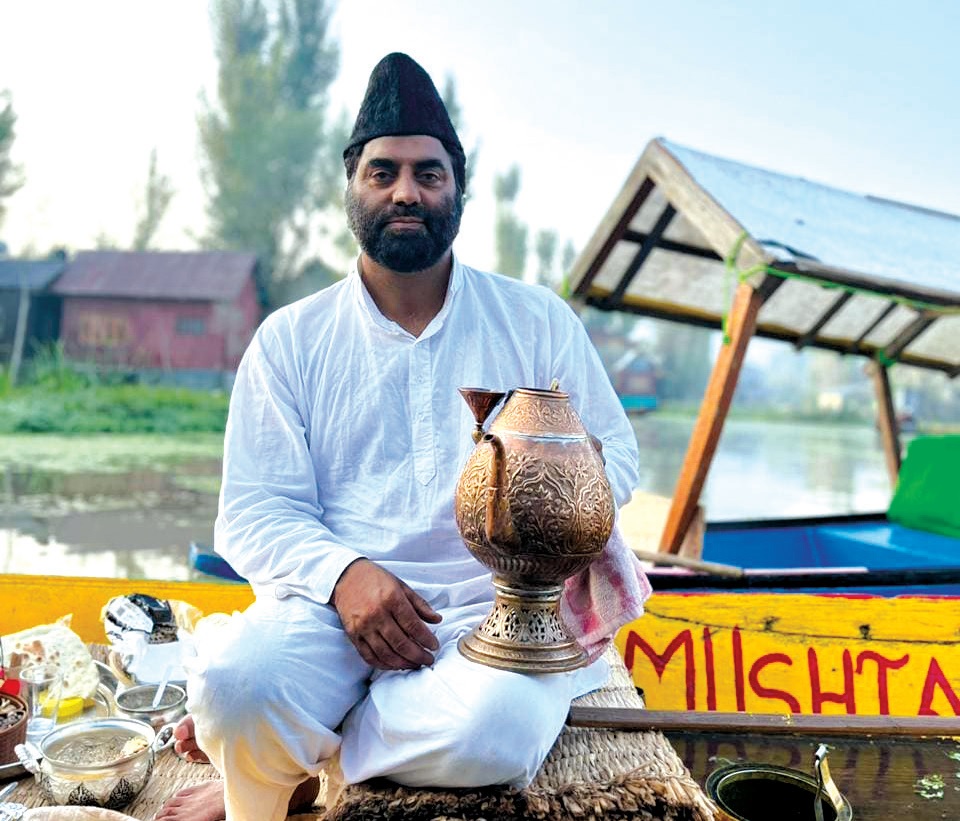 A man from Srinagar has been serving Kashmiri Kehwa with 16 ingredients in traditional Samovar to tourists and visitors on the famous waters of Dal Lake.
Mushtaq Hussain Akhoon, popularly known as ‘Mushtaq Kehwa’,has earned special place among the Kashmiri Kehwa lovers around the world. From Germany to Gujrat, he has served Kehwa to thousands of tourists over the past 9 years.
He told Rising Kashmir that their family had deep roots with Kashmiri Kehwa and used to serve to locals and tourists in the vicinity.
“It was 2014, when I started serving Kehwa in Kashmiri Somovar on family’s Shikara. I sell around 16 varieties of Kehwa each day, some like honey Kehwa and some like Saffron Kehwa,” he said.
Mushtaq adds various ingredients to Kashmiri Kehwa including ‘Almond, walnut, Cashew nut, Honey, Saffron, Cinnamon, Ginger, Sangram, Chai Pati, Rose petals, Dates, Cardamom, and others. To make the customers smile, he says, “i also add Hindustan and Pakistan to the Kashmiri Kehwa”
Among various varieties, the Saffron Kehwa is very popular among his customers, he said adding that he adds pure honey for better taste. On his boat, he carries a traditional kettle, spices, and other ingredients.
He says Kehwa ingredients such as Kesar (saffron strands) and whole spices give instant relief to the body from the chilled weather outside.
Mushtaq claims that Kehwa reduces the risk of heart disease by keeping the deposition of cholesterol in check. It also keeps a check on blood pressure levels.
“Each morning I leave early morning from the famous floating vegetable market where I serve fresh Kehwa to sellers and buyers. Then I move towards the Dal Lake, where mostly I sell this it tourists and other visitors,” he said.
Mushtaq says due to some family issues, he left his education midway when he was in 8th Class. Then to help his family, he would go farming in the morning and then ride a Shikhara. In the afternoon, Mushtaq would assist his brothers in their family shop selling carpets and shawls.
Mushtaq says the government should also come forward to help people to promote the Kashmiri Kehwa in national and international food exhibitions.
He sells each cup of Kehwa at rupees 50, while foreigners pay 100 or more than that. Tourists across the globe have enjoyed the Kashmiri Kehwa on Dal waters.
“Each day after the Sunset, I return to my home. My entire family is dependent on this earning and I hope more tourists will come to Kashmir and explore the hidden beauty of nature here,” Mushtaq said.
Over the past several years, Mushtaq has also attracted the attention of food bloggers from other states of India. Kehwa is considered useful for maintaining body temperature in Kashmir weather, especially during the cold season, hence it is a part of valley’s culture.