It Ends With Us by Colleen Hoover: Book Summary 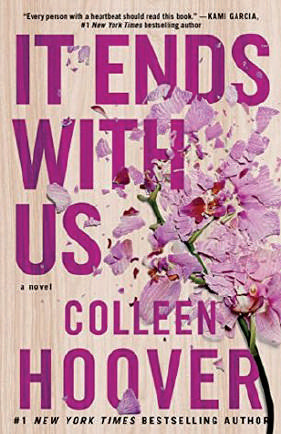 A novel written by Colleen Hoover starts with the scene where the character, Lily sits on either side of the ledge of twelve stories building and thinking of suicide but not of her own. She thinks about how people come to make such a decision without even regretting it.

It was the day when she delivered a eulogy at the death of her father, Andrew who Lily was not in good relations with. She has grown watching Andrew beating his wife Jenny Bloom and Lily would often think of his father as an abuser.

She believes that she delivered the worst obituary ever because she could not think of one good thing to say about her father.

After her father’s funeral, she moves to Boston and finds herself on the top of the building where she met Ryle Kincard, a neurosurgeon by profession who she finds attractive.

“There is no such thing as bad people. We’re all just people who sometimes do bad things,” were the words of Ryle that struck Lily silent and something to ponder on.

Later, she opens up her own small floral business and meets Ryle again. She started developing feelings for him despite it being hard not to fall for him.

In Boston, Lily begins reading a series of journals she wrote as a teenager to Ellen DeGeneres, the TV host who she admired, where she mentioned her relationship with the homeless guy, Atlas Corrigan who was a senior in high school.

Through the journals, the authors talk about how Lucy and Atlas met and how she helped him with the food and clothes.

While Lily fell in love with Atlas, she came to know that he had to move to Boston to live with his uncle. Atlas said that he was going to join the Marines. That night, Andrew came to know about Atlas and beat him with a baseball bat. Andrew told Lily that she had brought shame on the family by falling in love with a homeless man.

In Boston, after many years, Ryle and Lily get to know each other. Ryle hits Lily and apologizes to her. Lily warned him that if he ever hit her again, she would leave him.

That evening, Ryle and Lily went to a restaurant where Atlas works. Atlas got angry after watching the mark on Lily’s eye and the bandage on Ryle’s hand. He assumed that Ryle had hit Lily. He ordered her to leave Ryle. When Lily made excuses, Atlas told her that she sounded like her mother and gave her his number in need of help.

Ryle keeps on hitting Lily several times. Lily called Atlas for help and came to know that she is pregnant with Ryle. She takes time to think about her relationship with Ryle. After Lily gives birth to a daughter, she tells Ryle she wants a divorce. She wants to break the chain of the abuse and her daughter to grow up without remembering her father only as an abuser. About a year after her divorce from Ryle, Lily meets up with Atlas on the street and decides to start a relationship.

Through the book, the author takes up the major social issue of domestic abuse and the strength of a victim. The book is about choosing the end of violence over love for the well-being and safety of the victim.

In one of the journals, it is mentioned - Sometimes the things that matter you the most are also the things that hurt you the most. At one point, the author shows the venerable side of the character where she empathizes with her mother and she hates this feeling.

Hoover describes the book as the hardest one that she has written. The book was translated in 20 different languages