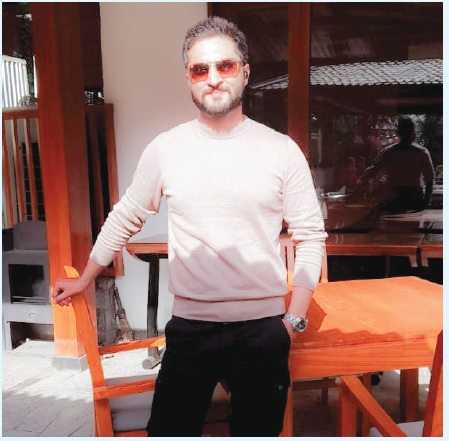 Faizan Nahvi, a Srinagar based entrepreneur is scripting his success story in the field of interior designing. His interior designing studio, FNG Group provides designing solutions to people and is trying to create a niche in Kashmir.
In the recent 15th Annual General Meeting held by the Chamber of Commerce and Industries where members of its Executive Committee were elected for the year 2022-23, Faizan Nahvi was elected as member of Executive Committee and also received the award ‘Best Interior Designer of Kashmir’ for his outstanding work in the field.
Nehvi has pursued civil engineering from SSM college of Science and Technology. His work includes interior designing of residences, hotels, restaurants, cafes etc.
The field of interior designing as per Nehvi has been thriving from the last 10 years and has a lot of opportunities to offer as people prefer professionals and interior designers to get their work done.
He said, “Everyone is busy and they don’t have time to pay attention to every minute detail related to designing. It demands a lot of planning and organizing. People take our suggestions. The market is huge but interior designers are still comparatively less,” he said.
He got the idea of setting up a studio when he travelled to other parts of India and saw people seeking help from professionals.
He said that the traditional way of designing in Kashmir is still adopted by a section of people but the scenario is changing and the industry of designing is picking up in the valley.
“Post 2014 floods in Kashmir, people have changed the way they used to get their interiors of the house designed. Most of the families prefer PVC-Polyvinyl Chloride panels in their ground floor and use wood in the second story. Wood is quite expensive so people go for PVC,” he said.
With theme-based cafes and restaurants, designers are getting more scope to be creative. “We have to go for customized wallpapers, theme-based stuff. Today we have computerized graphic paint and velvet wallpapers. Nowadays, everything is possible if you have a professional by your side,” he added.
For a place like Kashmir where the winter season is prolonged, he suggested that one needs to use wood that keeps the warmth in the houses and designers can carve good design out of it. He said that the architectural change in the houses of Kashmir, from wood to marble has created a lot of negative impacts on the health of people.
“The houses built nowadays have more height which is not good. This has affected the health of people and has given rise to a number of ailments like arthritis etc. Even during winters, due to shortage of electricity, the electric gadgets will be of no use which has added to the misery of the people living in such houses,” he said.
Talking about the new trends in interior designing, he further said that the fabric wallpaper gives a classy look which is liked by most of the people.
“Some people also want Papier-mâchédesigns on walls which are done by the Papier-mâchéartists from downtown Srinagar. Kashmir has been a hub of art and craft. Keeping the traditional aspect of the place into consideration, we work with the local artisans to make contemporary designs that go well with the tradition and culture,” he added.
He further said that laborers and technicians are the pillars of this work who ultimately have to make moves and do the things and his studio has the best ones to offer.
While concluding with the message for youth, he said, “There is a lack of employment and opportunities but that shouldn’t stop you from bringing a change in society. There are new things to try on and bring a positive change to your place.”