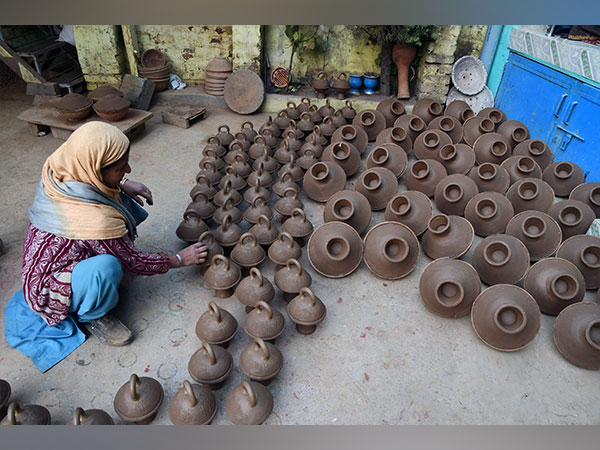 Abdul Rashid Kumhar, a traditional pottery artisan in Kashmir's Pulwama district was about to wind up his ancestral livelihood earning work, but is now thinking of hang on to this small trade.

A small intervention by the government of India has given a ray of hope to this craftsman. A 39-year-old Kumhar of Lethpora, a village located along the Srinagar-Jammu highway, is making earthenware like firepots and utensils of clay.

Pottery was a traditional craft of the Kashmir Valley for centuries and hundreds of families earned their livelihood by making clay utensils, firepots and flower vases the womenfolk would walk around villages to sell thus pottery and run their families.

For decades, potters, known as Kumhars, would use traditional handrun potter's wheel and fire ovens to make earthenwares. But due to strong competition from steel, metal and crockery manufacturing, craftsmen like Kumhar would hardly make ends meet.

"The traditional pottery has also been at the deathbed due to stiff competition from mechanical industry and lack of financial or mech support from the government," Kumhar said.

Hundreds of potters have wound up their traditional units due to low demand for earthenware and less earning, but pot makers like Kumhar have stuck to it as they could not find any other livelihood.

However, with the intervention of the government of India and the Jammu and Kashmir administrations through Khadi India, the remaining pot-makers can survive.

Khadi India Village Industries Board (KVIB) recently provided mechanical motor-driven wheels to potters at a function in the saffron Valley of Pampore.

As per Khadi India, 350 potters were given free electricity to run potter wheels to replace their traditional earthen wheels.

"The government's focus is to prove employment by reviving traditional small family-driven factories. Pottery revival is one among them from which a family at home can earn a livelihood by successfully running pottery units," said Manoj Kumar, chairman of Khadi India Village Industries Board.

Kumar said that more such motor-driven wheels will be given free to potters to revive this craft.

"Traditional wheels made of clay would take a lot of time and energy to make utensils. The motor-driven wheel will save our time, and energy and help in making more products in less time," said Kulsum, a young woman of Kulgam, who works at the pottery unit of her family.

Amid the unmatchable competition from mechanical units, Kashmiri potters make fire pots which are used in winter for fighting freezing cold to keep warm, tandoors (clay ovens) used by traditional bakers in Kashmir and tumbakneer (goblet drum), used as a musical instrument in marriages.

Kumhar of Lethpora said that the neglected craft is being revived which has given this dwindling craftsman a ray of hope to run their units and they expect more support from the government. (ANI)