The Director General of Police J&K Shri Dilbag Singh visited base camp Bhagwati Nagar in Jammu and districts of Samba and Kathua to review the security and traffic arrangements being put in place for the pilgrimage of Shri Amarnath Ji Yatra today. 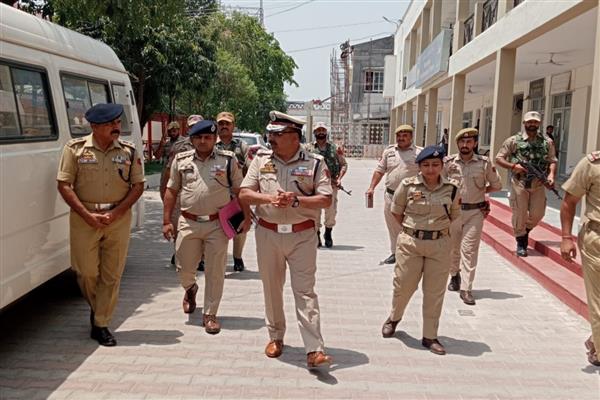 The Director General of Police J&K Shri Dilbag Singh visited base camp Bhagwati Nagar in Jammu and districts of Samba and Kathua to review the security and traffic arrangements being put in place for the pilgrimage of Shri Amarnath Ji Yatra today.

During his visits the DGP sought security and traffic arrangements reports from the senior officers of these districts being put in place for the smooth conduct of SANJY.
At the transit camp Bhagwati Nagar the DGP took a round of the complex and parking area for yatri vehicles. The DGP directed for completing and finalizing all the necessary arrangements on ground with respect to security of the camp. He stressed for monitoring of security and traffic plan arrangements by the jurisdictional senior officers on regular basis. He directed for area domination surrounding the Base Camp and also day / night patrolling to ensure safe and smooth conduct of the yatra.
SSP Jammu Shri Chandan Kholi gave a detailed briefing to the DGP regarding the measures being taken for the SANJY at Jammu. ASP Jammu City Shri Kulbir Handa and DySP Hqrs Jammu Ms Swati Sharma were also present on the occasion.
During his visit to Samba, SSP Samba Dr Abhishek Mahajan and DySsP Bari Brahamana, Vijaypur accompanied the DGP and briefed about various measures being taken for smooth conduct of the Yatra.
At Kathua, he visited Lakhanpur along with Deputy Commissioner Kathua Shri Rahul Pandey and SSP Kathua, Shri R C Kotwal who apprised the DGP about the progress of arrangements at the entry point for the pilgrims.
DGP stressed that security and facilitation of Yatris is top priority of Jammu and Kashmir Police and administration and added that Lakhanpur is the gateway to J&K for the pilgrims and every effort should be made to make their journey comfortable for the yatries. He said that security grids need to be strengthened more and coordination among all stakeholders must be ensured for the smooth conduct of the yatra.
The DGP also took note of the boarding and lodging facilities at these places being provided for the forces deployed. The DGP also directed for adequate measures for disaster management at these locations.