16 Corps is the most dynamic operational Corps of the Indian Army: LG Sinha

Making 21st Century, J&K's century is our resolve and nothing can hinder our progress. Our armed forces are working with one single aim, with one single intention to make J&K excel in every sphere of development, says the LG 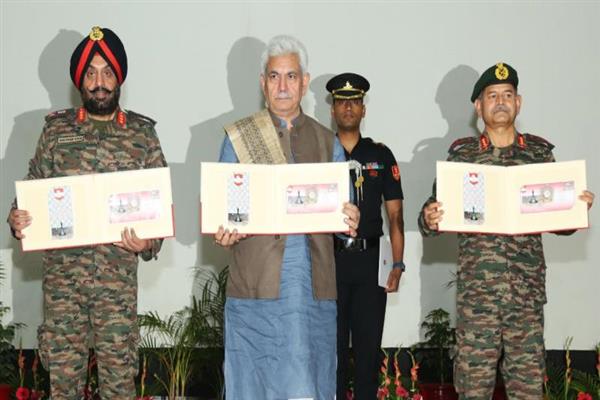 Greeting all ranks of Indian Army's White Knight Corps on its 50th raising day, the Lt Governor lauded them for their exemplary contribution in many strategic operations and for helping maintain peace and tranquility in the region.

White Knight Corps is the most dynamic operational Corps of the Indian Army. Since its raising in 1972, it has lived up to its motto of 'Making the First Move and Striking in All Directions', the Lt Governor observed.

The Lt Governor said that over the years, White Knight Corps has proved its mettle not only in combat, thwarting evil designs of adversaries, restoring normalcy and counter-terrorist operations in J&K but also made invaluable contribution in development of the region.

Making 21st Century, J&K's century is our resolve and nothing can hinder our progress. Our armed forces are working with one single aim, with one single intention to make J&K excel in every sphere of development, the Lt Governor added.

Expressing his gratitude, the Lt Governor lauded the unparalleled courage and valour of security forces and termed them as the living faces of sacrifice and bravery.

Outlining the impactful social work done by Indian Army in addition to their professional duties, the Lt Governor acknowledged the indispensable work done by 16 Corps in the field of education, health, housing, etc. in the areas bordering Poonch, Rajouri, Kishtwar and Jammu, under Operation Sadbhavna.

The Lt Governor made a special mention of the medical camps being organized to raise awareness about health and fitness among the local people, besides sustained thrust on channelizing young energies towards productive engagement through a host of schemes including- reformative and motivational lectures in schools and colleges, scholarships for needy students, providing IT and computer education for skill development and promotion of sports amongst the youth.

Speaking on peace and development in the region, the Lt Governor reiterated that the government is determined to destroy not only terrorists but the entire terror ecosystem in J&K with a clear cut policy of not sparing the guilty and not touching the innocent.

Troubled by our renewed resolve towards development of Jammu & Kashmir, its aspirations and latest goals, our enemies are making desperate attempts to create unrest in J&K through drug trafficking, smuggling of arms through drones and through social media. Government’s determination and the indomitable courage of our Police and Security forces will not let the enemies outside and within our borders succeed, the Lt Governor asserted.

The Lieutenant Governor also shed light on increasing self-reliance in various sectors, including defence, and said, “Under the leadership of the Hon’ble Prime Minister, Indian Army is also moving towards self-reliance in terms of weapons and other military resources. It is due to the Government’s persistent efforts that about 65% of the military budget is now spent within the country itself”.

Speaking on the occasion, 16 Corps Commander, Lt Gen Manjinder Singh welcomed the Lt Governor and other distinguished guests and assured them of the unflinching support by all ranks of White Knight Corps towards the National cause.

He also highlighted the major initiatives undertaken by the Indian Army for the Awaam in addition to guarding the borders.

Prominent among others, present on the occasion were ADGP Jammu, Sh Mukesh Singh and Divisional Commissioner Jammu, Sh Ramesh Kumar, besides senior officers of Army and Civil Administration.