Through singing, Shameema Akhtar spreads message of love and peace among diverse faiths 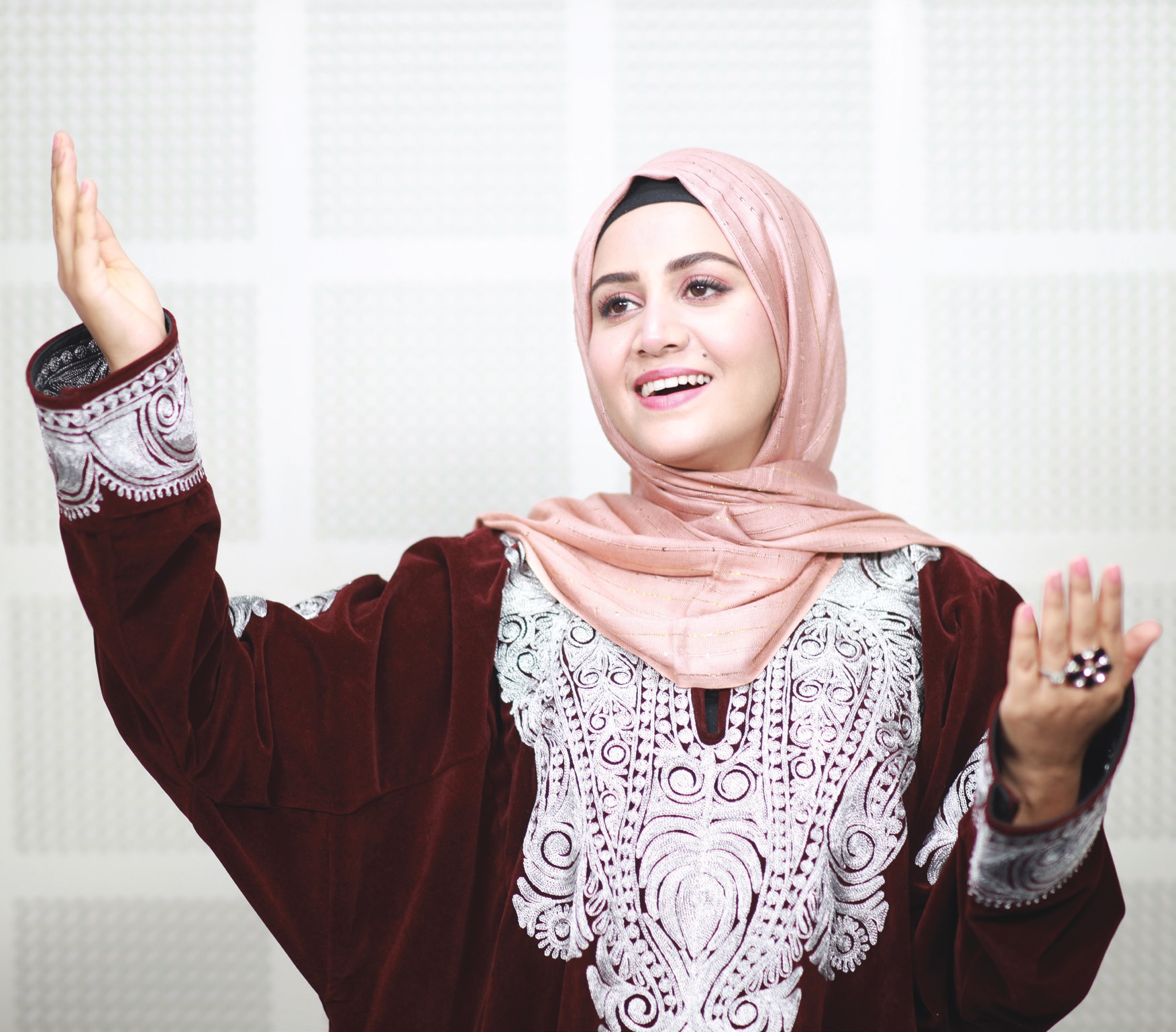 Hailing from Aragam, Bandipora, Shameema has been singing for years to give the message of love and peace among the people of diverse faiths. For her, music has no boundaries and she believes that every religion has the same message to offer.

With her multilingual singing, she has won the hearts of many music enthusiasts across the world, though many languages are still unfamiliar to her.

She never thought that she would discover her talent of multilingual singing until one of her teachers, Sushma Nahar recommended her to sing a Marathi song and then she started exploring one language after another but singing in a diverse language for a distinct audience is not easy for her.

When she gets a song in an unfamiliar language, she writes it in Urdu language which gets cross checked by her mentors.

“I practice it in my voice to hold over the flow and pronunciation. Afterwards the dummy is recorded where I understand the meaning of every word which helps me in expressing the emotions attached to the song and then it is being played for the experts to get their feedback. It usually takes a lot of time and effort. Recently I did one song in Kannada which is considered a tough language. The song took 2 months in the making,” she said.

Though the process of song making was time consuming and hectic, this is where she finds solitude and connects with her audience.

Since childhood, she has been fond of music. Watching her passion, her parents sent her to Bhatkhande Music University, Lucknow where she studied music and met Mohammad Mazhar Siddique, who is a singer and music composer. Meeting Mazhar gave her an opportunity to learn more about classical music.

She has been working with the NGO named Sarhad that works for border areas to spread humanity, peace and love where she and Mazhaar heads the band with the name ‘Gaash’ meaning light.

The band had young Kashmiri boys and girls who were affected by violence in the region. Every member of the group had suffered trauma and lost family members due to turmoil in the past but the motive was to spread peace through music.

One of the members of the group, Joginder Singh lost 15 members of his family. He survived as he was kept hidden by his sister. Another one, Manzoor lost his father who was a police constable.

“The motive was to pick up a guitar, instead of an armor. Together we did a lot of shows and received huge applause for our work. We performed on stage and also taught at various academies as music teachers.” he said.

After they joined the NGO, they started a music department and also set up studios. Time and again, they have been engaging students from schools and colleges to make and promote their music with the intention to provide a platform to younger generations. The NGO conducts a Kashmir music festival yearly which attracts a huge number of Kashmiri listeners.

“Like I, being a Kashmiri girl, I sing Marathi songs. Similarly, we have a Marathi artist who sings Kashmiri songs and poetry from legendary Kashmiri poets. Our country has states with different languages and Sufi saints. We take the poetry from the legendary poets. We compose those and promote them on our channel so that it reaches the masses,” she said.

Talking about her songs, she said that she has done a song in Bengali for the Baul community. Bauls belong to an unorthodox devotional tradition, influenced by Hinduism, Buddhism, Bengali, Vasinavism and Sufism, which received huge response at the virtual platform.

She sang Pasaydan in Marathi which is a prayer for world peace. “It is a beautiful poem. It is the prayer to the almighty for the whole of humanity and nature so that everyone lives happily. The poem has been sung in 12 languages including Dogri, Kashmiri, Sanskrit by other artists also,” she said.

“When I sing a song, I wear Kashmiri attire so that people will come to know that a Kashmiri girl is singing in different languages and my intention of evoking the sentiment of unity in diversity and communal harmony among the audience is fulfilled,” she said.

Mohammad Mazhar Sidiqui has been doing composition to her songs. Being a music ardent, he sings Kashmiri songs too and a song recently done by them, has an Arabic portion sung by him.

She said that there are many Kashmiris who sing Marathi songs with much proficiency as the language of music is beyond words and dialects.

Like any other career option, she said that the field of music has various opportunities to offer. She has done her bachelor degree in music from Bhatkhande Music University, Lucknow and also pursued Visharad masters in Hindustani classical music.

She said, “One can pursue degrees in music and teach it as a subject in educational institutes. There are many institutions that are dedicated to music and one can make a good future ahead. You can do a PhD in music and get a good job as a professor or teacher. The field is also competitive like any other field and demands a lot of effort and practice to sustain in the industry.”

People have wrong notions of music that doesn't let them support their kids. “In my village, there are many boys and girls who are fond of music but they don’t get support from their parents. People equate it with bad things. One should sing good songs and spread a positive message. I believe God is one and he has different names,” she said.

Abida Parveen and Shameema Azad, Richa Sharma and her mentor Sanjay Nair are people who she looks after and listens to their music.

Revealing her family lineage who have been associated with the music in the past, she said that she has got the singing trait from her maternal grandfather who was a poet and one of the finest Rabab players of his time. Her maternal grandmother was also a poetess.

“My paternal grandfather was a saint and my Nanaji was influenced by the Kashmiri Sufi saint Lala Aragami,” she said.

During the Urs, her home would reverberate with qawwalis and devotional Sufi songs. She grew up in the atmosphere which developed her interest in devotional and spiritual songs.

“I used to sing during school.  When my teachers appreciated me and told my father about my singing talent, my father extended full support to me time and again and did what was needed for me to learn and grow,” she said.

She lives in Maharashtra and was the first one from her family to pursue singing as her career. Her siblings are also following her footsteps and trying to make their career in music and singing.

“One should always be grounded, kind and be gentle towards people. It is the mantra of my success,” she said.