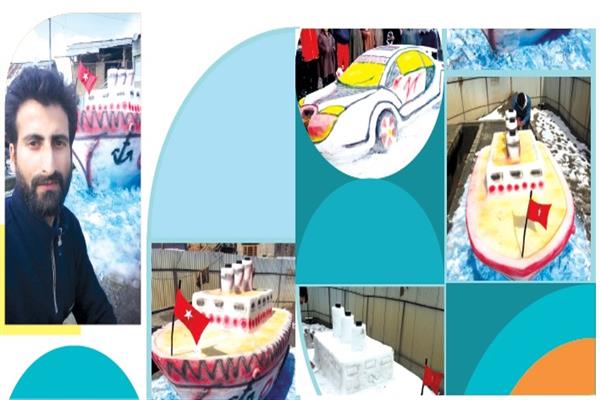 An artist's life happens to be a poetic, both in odd and even. Being an artist is a decision that has implications and consequences as well as rewards and victories.The brave hearts who dare to move out of the crowd and convert their imagination into art, still have the upper hand. An artist's path can be full of ups and downs, successes and failures, good and poor decisions, but it can't be routine or dull.

Zubair Ahmad Dar, 30, who lives in the small village of Doonwari, Chandoora in Central Kashmir’s Budgam district, started painting during his childhood. After completing his B.Sc degree from Amar Singh College, he started working in his car accessories shop, and since then he has been earning his livelihood from there.

According to Zubair, there are very few customers who visit his shop during the winter, and in 2014, he along with his friends visited Yusmarg, a tourist destination where he made a Taj Mahal out of snow, and pictures of the same were widely shared on social media sites by netizens.

With the help from his friends, It took him two days and ten thousand rupees to complete this art work, he said.

People's appreciation for his artwork gave the young artist hope, and after two years, he built a snow car at ski resort Gulmarg, which was sponsored by some government officials.

In the year 2019, Zubair made Bugatti cars in Mochwa and Kralpora on the Srinagar outskirts, which have gained the attention of people across the globe.After photographs of the Buggati automobile were shared on social media, it became a popular topic on social media sites.People from various parts of country came to see the snow automobile.

Zubair has been creating snow models since he was a child. The recent "snow car" hasn't been the only thing that has amazed the locals,his earlier works have also caused quite a sensation.

"I can make anything out of snow; all I need is resources," Zubair told Rising Kashmir, adding that he want to produce something that will attract international attention.

He says that the roads were blanketed in snow, he decided to do something that has gained him praise on social media;he built a whole vehicle model out of snow.

“My wife always fought with me as there was no end to the snow. I always encouraged her that she should be proud of my art. The reason behind why she was fighting with me was that there was no outcome to the snow sculpture,” Zubair says adding, “Recently, when I made the snow ship, which took me two days to complete, my wife saw this on social media and didn't talk to me for days.”

I did it for a variety of reasons, one of which is that I enjoy painting and photography. It was basically just a prop for me to snap shots of the snow ship, he says.

He had intended to make something fresh, but once he got started, a ship began to take shape.

“As I was piling the snow, it began to accumulate in some locations, and I began to notice a curvature. And I got to the point where I could nearly see it. It just showed up,"Zubair said with a laugh.

The snowship has attracted the attention of the entire community. He said his nephews and all the neighbourhood kids had a great time playing on it.

Zubair spent about 20 hours crafting snowballs, including 10 hours shoveling and piling snow and another 10 hours carving the monster with a machete.

“Sometimes I get discouraged at myself for spending too much time on making these snow sculptures as no one from government or any other agency paid attention to my work,” he said.

He believes if authorities give him a chance to make snow sculptures at tourist places,people across the world will come to seehis snow art.

“If tourism department willaccommodate me, I will make a snow Taj Mahal that will look like the actual Taj Mahal. People can visit inside the snow-made Taj Mahal, and if lights are illuminated, that will add charm to it,” he says.

Zubair is a self learned artist. He says, "I don't have any teachers who has taught me the snow art. I can make things out of mud, sand, and wood. For me, there is nothing difficult to make."

He chose this form of art is because there is less work at his shop during the winter, so likes to spend time to build these things.

He however is disappointed over approach of government as his work is not getting anything except applause and appreciation from the people.

He believes that if his work is taken seriously, it will help the government, especially the Tourism Department, to attract more tourists to Kashmir.

“I am pretty hopeful that if my work is recognised by the authorities, I will be able to take part in snow sculpture competitions held at an international level. And i will make Kashmir as well as my country proud there,” Zubair concludes.