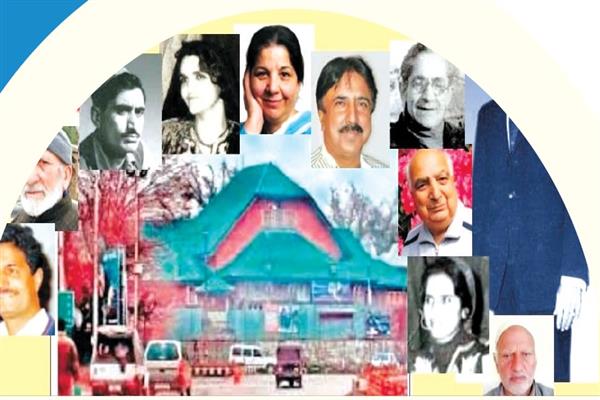 When there was no concept of internet or television in Kashmir, Zoon Dab - a radio program which created a connection with the people, is being missed by the people who were its keen listeners.

Rising Kashmir’s feature writer Saba Khan connected with those listeners and some artists who worked in Zoon Dab and went down the memory lane so that Kashmir could relive those moments.

72 year old Fatima Syed from Rainawari area ofSrinagar was a regular listener of Zoon Dab drama. She said, “Iused to wait eagerly for the drama which was aired at 9 am. All the participants who performed in this program were very talented. For us, it was just like the story of every household.”

She has her fond memories attached to it which she has never forgotten. “I have picked up many lines and poems from the drama. The advice the artists would give in the program, I have learnt much from it."

Having memorized the poem, laktu matu tayar koth from Zoon Dab, she has further passed it on to his grandson.

“If it will be telecasted again, today’s generation will surely like it for its rich language and valuable advice,” she added.

The radio program, which was once listened in every household of the valley is no more aired on the radio now. The popular program would get broadcast on Radio Kashmir and all the listeners would get glued to their radio sets.

Zoon Dab was aired for more than twenty years and radio being the only source of entertainment for most of the people added to its popularity.

An entertainment and infotainment show was run by the old school broadcasters whose voice had captured a good number of fans from all corners of the valley.

Fatimasaid that all the ladies of the neighborhood would look forward to listening to it and would try to finish their house chores before the time.

Ashok Kak, one of the performers of the Zoon Dub, who played the role of Ismala, said that he was in 7th grade when he got a chance to participate in the show.

“The script was written by Pushkar Ban, Somnath Sadu and sometimes Farooq Nazki,” he said.

Started in 1966 as a family feature, the show highlighted the daily problems of people of Kashmir related to electricity, road, water and other issues. It was continuously broadcasted till 1986 but due to the death of some artists,as some of them retired or transferred, it stopped getting on air.

About the popularity of the drama, he said the artists got huge fame because of the drama. Recalling the time of 1987 when he went to the DC office for verification, he was asked about his work in the famous drama.

“It was the time when people used to listen to the radio very much, now it is a time of television and the internet. People have lost interest in radio,” he said.

He also said that if Zoon Dub is broadcasted on the present day channel, it will again catch the attention of people.

While talking to the Shamshad Kralwari, he said, “Zoon- Dub is the drama in which we produce the connection between broadcasting institutions with the listener”.

“During his Chief Ministership, Ghulam Mohammad Sadiq has ordered his officials to listen to the Zoon dab, and work immediately on the redressal of problems that were highlighted in the program,” Kralwari said adding “we maintained the decorum of the program when it was restarted under the directorship of Ashraf Sahil.”

During this time, Pushkar ban, Nayeema Akhtar and Maryum Begum also worked for its revival. However, after two and a half years, Kralwari was transferred and l the program was again stopped.

In 1973, three artists of Zoon Dab includingSomnath Sadu, Maryum Begum and Pushkar Ban were awarded with the “Padam Shree”.

While speaking about how the Zoon Dab program was started on raids, Bashir Arif, former deputy Director General, Radio Kashmir said, “On 6 September 1965, the war started between India and Pakistan. Kashmiri people listened to the Pakistani bulletin every morning at 7.30 am. It was a daily routine for the people of Kashmir. The focus of program was to get the people out of the clutches of Pakistani bulletin.”

At that time in Kashmir, Director Nandh Lal Chawla was the first broadcaster to introduce public service broadcasting. Before that, there was only entertainment, information, education and news on the radio.It was his brainchild who introduced the program, in which we discussed and solved the problem of the people.

“Chawla had a good relationship with Chief Minister Ghulam Mohammad Sadiq who released the order about whatever issues were raised and discussed in Zoon Dub, the redressal for the same problem should be looked after on the same day. These include the issues related to electricity , water, roads and other civic amenities. This is the main reason of its popularity,” Bashir Arif said.

Once this program was aired at 7.30 am on 3rd October, 1966, people stopped listening to the Pakistan bulletin.

The first characters who was introduced in Zoon Dub were Somnath Sadu as Agh sahib, Maryam begum as Agh bai and also Ghulam Nabi Baba was the first artist who worked as household help in this feature.

“In February 1967, Pushkar Ban was introduced as Ma'am Pip Ji, a new character in the zoon dub.I started in January 1967 as a child artist (Nazir Lala) in this feature,” Bashir Arif said.

In 1971, Pushkar Ban went to Australia for training and on the behalf of his humorous character Farooq Nazki was introduced as Ramb Lala and also Ashok Kak as Ismail.

The program became popular and all the stationed in other parts of India were asked to start a programme like Zoon Dab where the public grevience was discussed.

Zoona Dab was re-started in 2012 when Bashir Aarif took charge as Deputy Director-General at Radio Kashmir Srinagar. New characters were introduced.Bashir Aarif played the role of Nazir Lala, Shahida Parveen as his wife, Ashok kak as Ismalaand Rashid Barqi as tenants of Zoona-Dab.