Zamrooda: A lady who makes womenfolk self sufficient 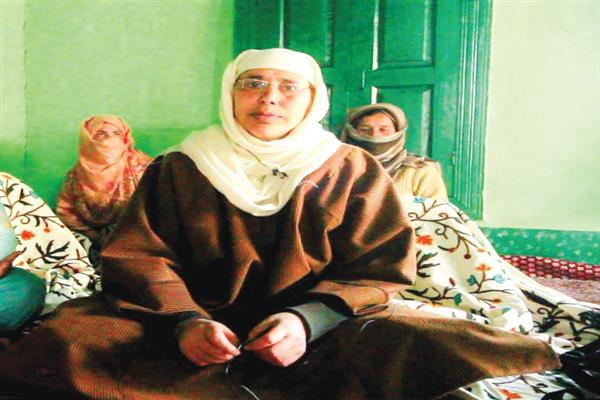 Zamrooda, a senior woman entrepreneur from a far off village of Kund in Kulgam district, has been in the trade of handicrafts and stitch work since more than three decades now.

A school dropout, Zamrooda learnt the craft of making and designing crewel curtains, bed sheets and other related items when she was in her teenage. Since then she has successfully trained and passed her art to scores of women, making them self-sufficient.

Currently there are around 400 centers operating under her supervision in dozens of villages in twin districts of Anantnag and Kulgam in which some 4000 literate as well as illiterate, married as well as unmarried women are either under training or working.

She has been establishing such centers mostly in rural areas on her own with no support from the authorities or the concerned handicrafts department. The artisans working at her centers rue that the claims by the handicrafts department of J&K government about promotion of artisans is false and the government has done nothing to support them or to promote their work and they have been purchasing the raw materials and selling their products on their own.

Zamrooda, while speaking to Rising Kashmir, said that she learnt the craft in her teenage and she continue to propagate this artwork by opening training centres at various locations.

“I learned this craft in late eighties and after 1991 I dedicated my life for this. Initially, I opened a training center in Dialgam area of Anantnag district which was followed by another one in Mir Bazar area of Kulgam district and the other in Devsar in the same district. There was no looking back after this and currently we are running hundreds of such training and manufacturing centers in Kulgam and Anantnag, mostly in rural areas”, says Zamrooda.

When asked why she preferred rural areas mostly for establishing such centers, Zamrooda says, “In urban areas like towns there are many opportunities for female folk and people aren’t much conservative unlike in villages, so the women go out freely and mingle with males in workplaces easily there. Providing such avenues of income and employment in their immediate vicinity for women in villages and far off areas let them stay within their locality and their families do not object either since there are only women working and training in such centers.”

Their sole purpose of training in these centers is gaining a skill which makes them financially independent and makes their leisure time productive.

A 22 year old female artisan, Humairasays they have been buying raw materials on their own and preparing hand made products which they sell on their own in the open market.

“We have been buying raw materials like fabric, threads and tools from our own pockets. The curtains, pillow and bedcovers that we manufacture are then sold to shopkeepers who earn handsomely on our products while we get a meagre profit out of it. From buying to selling the final product, there is no support from the government in anyway. It’s the dedication and hardwork of Zamrooda Madam which is keeping thousands of women going in such centers”, says Humaira, anundergraduate student, who is also working as an artisan in Zamrooda’s centre.

“The government organises events for the promotion of artisans in places like Srinagar and elsewhere but females in rural areas hardly get any benefits from such activities. If the Handicrafts department is serious about the promotion of local arts and crafts then why don’t they establish societies for females like us who are putting their everything for sustenance in this field,” questions Humaira.

“In many events and exhibitions we have seen employees of Handicrafts department displaying borrowed products giving an impression that it’s their product, never have they called us or provided opportunities to showcase our work and products. In each center there are some 100-200 women working in Anantnag and Kulgam alone but the concerned department never thought of supporting or promoting them in any way, she says.

“I have been supporting my education by earning from this stitch work since I was in school in my early teens, the credit of which goes to Zamrooda Ji,” she adds.

Like Humaira, hundreds of females working in these centers have become a strong support for their male partners.

Another artisan, Fahmeedasays her husband is a daily wager and works as a labourer in and out of the locality. Sometimes he doesn’t find work which was affecting their family economically.

“It was on the insistence of Zamrooda Ji that I joined a local stitching center some five years ago, since then I have been single-handedly able to support the education of my two kids which has come as a relief for our family,” Fahmeeda says.

Each of the skilled workers working in the centers under supervision of Zamrooda earn rupees 4000-5000 per month on an average and if they are provided separate societies by the handicrafts department, they believe, they can triple their income and encourage more women to join this sector.

In a center operating in Kapran village of Anantnag district, which is some 50 kilometers away from the district headquarter, around 150 women and young girls are working and earning conveniently.

“As per government norms the handicrafts department is supposed to provide joint societies for each ten girls, but the paperwork in these departments never lets these deserving women to taste the benefits of such schemes,” says Zamrooda.