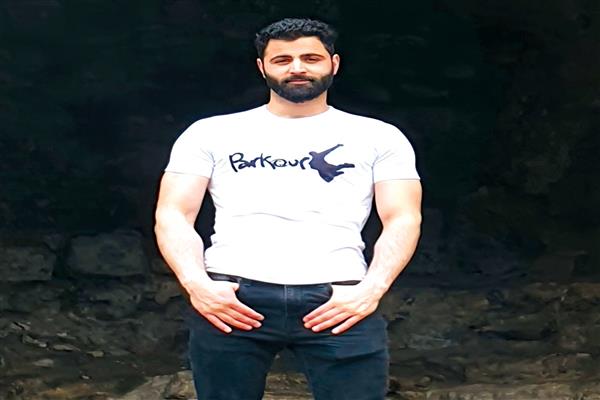 A decade ago when there was no concept of Parkour - an athletic training discipline that involves running, jumping, and leaping - in Kashmir, Zahid Shah started this sport when this modern-day practice was more obscure.

Claims to be the first Parkour practitioner of the Himalayan Valley, Shah says as a child he had a problem with sports and rules, he would always question things in any sport.

“So when I learned about parkour there were no rules in it, which was fascinating for me and I ended up as a parkour practitioner (free runner),” he says.

He says Parkour is an athletic discipline in which practitioners combine gymnastics, acrobatics, running, and jumping to move a variety of terrains.

Hailing from the Rainawari area in Srinagar city, the 30year old Shah has done bachelor's degree in physical education and sports, from Mahatma Gandhi Kashi Vidyapith University Varanasi and is currently an athlete and a parkour coach. He is currently a board member of the International Parkour Federation.

“I am the Director of Wall Runners, an NGO which aims to empower youth through parkour and sports; we have a chain of gyms in the world including in Kashmir, Gaza, and Kenya,” he said adding, “I have been training martial arts since I was 12 years old but it never appealed to me as everything has rules and when I turned 19 I discovered parkour on YouTube which was exciting and inspiring since then I have loved this sport and never looked back.”

Ryan Doyle, a Parkour athlete from the United Kingdom as well as Gaza parkour was Shah’s inspiration in this sport.

Shah had to overcome several hurdles in his sports journey. While talking about the hurdles, he says not having a coach to learn from or a place to train was one of the biggest hurdles he had in his parkour journey.

“I used to wait for snow just to try an advance flip or move because snow acts as a natural crash mat and I wouldn't injure myself. The same goes for water, I and my team used to train in Dal Lake so we don't hurt ourselves,” he says.

Not getting any recognition was another hurdle for Shah as there was no Parkour association where from he could pursue his career; so training parkour remained purely personal, he says.

“I was already an adult when I started training in parkour, a sport no one has heard of in Kashmir. So, naturally, there was no association, no coaches or trainers or gyms where i could hone my skills,” he adds.

Shah had to manage it by self-learning through watching Youtube, “Now I am transmitting this skill to youngsters who show interest in the sport,” he says.

In his journey there are numerous people including friends, teachers and parentswho supported him.“As long as you progress people will support you and I was lucky enough to be surrounded by a lot of good people,” he says.

Shah claims that he is the only certified Parkour coach of Parkour in India, got his scholarship to be a coach from the International parkour Federation, and trained in New York.

Shah has received the “Peace through Parkour” award at the Florida state fairground in 2019. And is currently a board member of the International Parkour Federation.

“Wallrunners is my biggest achievement because it allowed me to help and teach others as well,” he said, adding “In my 10 years of career I didn’t see a single result for 7 years but I never stopped, I was consistent and everything started to fall in place.”

About his training schedule, he says that he used to train 4 to 5 hours a day which included bodyweight training, mobility, tumbling, and flexibility.“But now as I am more into coaching, I am training for an hour 6 days a week. It mainly consists of strength training and mobility, and tumbling only for weekends,” he says.

He says, “I have coached more than 3500 players all over the world including 2500 from Kashmir so far.”

When he initially started parkour training in 2012, there was not any parkour association in Kashmir or even in India, but the good news is that they now have built an association in India.

"And I am the Technical Director of the Indian Parkour Association, the only competition I ever participated in was in USA parkour Cup 2019 out of 150 individuals I was in top 18," he says.

Shah credits his success to Allah, believing without him nothing would have ever happened to him.

“People primarily athletes in general think it’s their hard work that bears the fruit, while hard work is important nothing will ever happen without the will of Almighty and no one else should be given credit to,” he says.

While talking about his future plans, he says, "My plan is to make gyms all over Kashmir and I want to make them free so people of all ages and sexes can have a place to train. Then taking Wall runners to the rest of the world especially conflict zones where parkour can act as a stress breaker for the youth," he says.

Speaking about his plan for the promotion of sport in Kashmir he says, “My short term plan is to take parkour to the extreme ends of Kashmir and train kids who can't make it to the city and my long term goal is to have a gym in every district in Kashmir.”

Talking about how parkour is different from other sports he says the movement is the specialty in parkour, the way we move or express ourselves is unique. It's beautiful to do for an athlete and beautiful to watch for a viewer in any case it leaves everyone in awe.

Shedding light on the health benefits of parkour, he says “It's a well-known fact that parkour requires a good level of athletic ability to perform, so anyone who trains in parkour should be physically healthy. It is also proven that people who train in parkour have lower rates of stress, anxiety, depression, and suicidal behavior.”

It also reduces the risk of substance abuse like drugs, making a youth or athletes who train parkour a complete package of well-being, he says.

He says there have athletes from every district in Kashmir now.A lot of youth are involved in this sport now.

“We have Sunday classes for people, Who can't attend every day.We even have personal training classes, one on one classes. The idea is to empower youth and bring them together under one name,Kashmir freerunning and parkour family.”