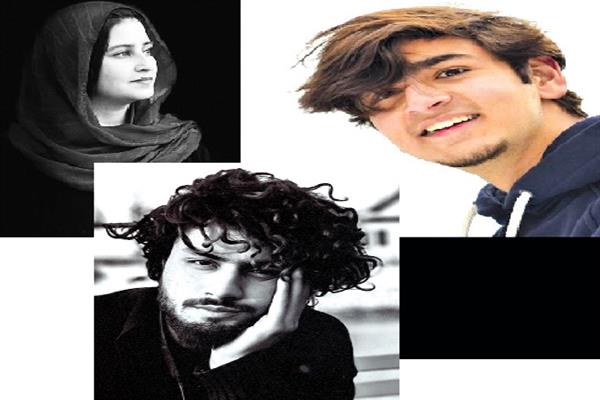 23 years old Rather Hashim is a singer, songwriter and composer from Srinagar. Since 2017, he has been creating a niche for himself and has created a huge fan following within a few years.

The self-taught artist is pursuing bachelors in commerce and has learnt singing from YouTube and has always been confident enough to perform in front of the masses.

“For me, it is something which is everywhere. It’s in our blood and a part of life. Music and song writing comes with my existence,” he said.

The music of Kashmir reflects the rich culture and heritage of the place and undoubtedly has been the attraction for the people. In the past and contemporary times, celebrated artists of music have kept the industry alive and the young artists look up to them for inspiration.

Talking about the inspiration, Hashim said that the Kashmiri music industry has a number of renowned artists and they have made their music and fan following at the time when there was no social media. “The promotion and the gathering of the audience were not at all easy at that time as it is today. There are people who have contributed to industry. We all get inspired with them only,” he said.

Released in 2020, Baalyaaro is his debut song in Kashmiri. Blended with soft rhythms, the song depicts separation and longing and has been receiving good response from the people.

The Bollywood music got him in the music scene and then listening to old rock and roll music bands further hone his skills. He said, “I am trying to listen to more songs and want to do it for myself and push my limits.”

Since music is still an unacceptable art for a larger section of society which is the reason that the opportunities are less for artists.

Despite having fewer platforms, the artists keep the courage of pursuing it and representing Kashmir on a bigger platform.

The artists usually find their places in cafes where intimate gigs take place and their art is appreciated.

Another young self-taught artist, Adeeb bin Shafiq, is a music producer and composer who started taking interest in music when he was in 9th standard.

Starting his music career with playing guitar, his interest gradually took him to singing and songwriting as well.

“I got to meet different people and got to know various aspects of music. I explored music and its different genres and learnt about music production - mixing and mastering skills from YouTube itself,” he said.

Calling this an age of multi-talented artists, he said artists like him do everything on their own. “This is the good quality in me and the artists like me as we can do everything on our own from lyric writing to performing before the audience. It’s really good to be a multi-tasker and do what you actually want in a song. There are people who write the lyrics but don’t know about musical instruments or can’t be a performer.”

Currently pursuing his studies in Journalism, Adeeb has participated in various school fests and NGOs programs outside Jammu and Kashmir.

He said, “I got good exposure and started a home studio where people came to me to record their songs. When I uploaded a song on YouTube, I got a good response.”

Presently he is working on two albums. An album named Bekhabar has ten songs about mixed feelings and is under the recording process. The artists utilize social media to reach out to the masses and create a fanbase.

Kashmiri music is growing with many singers making their mark in industry and the female artists are no less than their male counterparts.  Some of them have started working with outside labels as well.

On the insistence of her sister and cousins, Zartasha Zainab uploaded her singing video on her social media handle. Little did she know that she would be an overnight sensation. After the video got viral, she was soon approached by many Bollywood music labels.

When she performed for the first time in school in grade 6, she came to know that she can be a good performer after getting huge applause from her audience.

“I didn’t think much about it and concentrated on my studies only. After a gap of 6 years, I started taking interest but never thought that I would be able to make it,” she said.

Her debut song is Haider Haider- a Sufi mystical song with the Bollywood music label- Tips industries and the song has received huge response from the listeners.

She has also done a project with the Jammu based production house. It is a fusion song and has three different songs sung by three different artists. Currently she is working on a number of projects.

She said, “I am a Kashmiri but my mother tongue is not Kashmiri. It is western Punjabi that is spoken in Pakistan because my ancestors were from the same place. I am mingled and related to the culture.”

Having Sufi and folklore as her genre, she likes the songs that people can connect with the lyrics and composition. With her songs, she wants to revive the Sufi genre and revive the roots.

“Western music is fascinating but we should not forget our roots. We have huge Kashmiri literature and it is beautifully written. The song that I have sung is being heard by people of all regions and religions and people feel connected. An atheist once messaged me and told me that he felt connected with something for the first time. I sing and people should be able to connect and come back to their roots,” she said.

Currently Zartasha is pursuing her bachelor’s degree and is continuing her music career as well. She has inherited music from her mother but has never tried her hands in writing.

She said, “I have not explored my writing talent yet but the response I am getting from people makes me happy and pushes me to work more and more. My mother writes and she sings as well. Recently I have installed the music set up at home. I am ready to learn whatever is demanded.”

Zartasha believes that if something is done within the limits and making self-respect a priority then there is no harm in exploring the talent and eventually one gets a positive response from everywhere.

Talking about the upliftment of the artists she said artists should be uplifted so that they are encouraged and motivated. She said, “If we are going in this direction, we should get acknowledgement. Fame and money is not what I want. If I am presenting something, the society should appreciate it. The good art gets less appreciation and promotion as compared to the cringe stuff.”

“We should have a culture where art as well as artists are given a status and appreciation but unfortunately both are lacking,” she said.