Youngsters on a mission to revive Ladishah 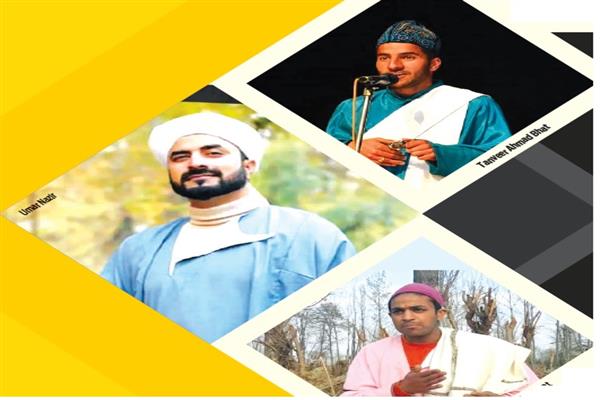 Wearing a turban, pheran and broad long white trousers, Ladishah—a satirist—used to sing folklores to express pain or joy and comment on social evils. Ladishah is a storytelling musical genre practiced and performed in Kashmir for many centuries. It was usually sung or recited by men. The tradition of Ladishah is old in Kashmir but it receded from the public sphere in the last few decades. A few youngsters from Kashmir valley, however, have stepped up to bring life to this dying oral tradition.

Tanveer Ahmad Bhat Alias Tanveer Fighter, a Ladishah from Valley says that he has been performing the Ladishah for the past decade.

The 21-year-old Ladishah said, “I have been performing Ladishah for more than 11 years."

He said that when there was no social media, internet and other platforms, people of Kashmir used to enjoy the Ladishah which was mainly getting telecasted or broadcasted.

“Besides, performing Ladishah, I also wrote the script for the Ladishah. I am not much active on social media and focus on writing and reciting it," he said.

He says that he has written scripts for Ladishah on almost all topics and issues. “Ladishah is almost on the verge of extinction and I am doing my bit for its survival and also to preserve the legacy of Kashmir,” Bhat said.

He said that his father Bashir Ahmad Bhat alias Bashir Fighter has been performing Ladishah for 30 years. “My 58-year-old father is still performing the Ladishah skit to earn a livelihood,” he said.

Bhat said, “In our area, a number of people were associated with the Ladishah. However, most of them left the profession and chose other means to earn a livelihood."

“I am the only young person in our area who is still performing the Ladishah. I only survived because I write and recite Ladishah,” Bhat said.

Bhat has performed Ladishah at hundreds of places. “There is still a group of people who love to listen to Ladishah.”

He says that the Ladishah used to be a very popular skit among the locals of Kashmir and during its performance, important information used to be disseminated among them.

“However, since people started using modern technology, this tradition seems to be on the verge of extinction,” he said.

Another, 21-year-old boy, Amir Ahmad Bhaghat has been performing Ladishah since 2009.

Bhaghat says that his main motive of performing and teaching Ladishah is to preserve the Ladishah culture.“Everyone in our family is either performing Ladishah or Bhand-Pather and the whole village — Balapur is associated with this profession,” he said.

“This is the only source of livelihood for many families in our area and I appeal to the government to pay attention to the people who are on a sort of mission to preserve the Ladishah culture but are earning nothing out of it,” Bhaghat said.

He said Ladishah has declined now especially after the intrusion of social media.

He said that in the Wathoora area, they are teaching Ladishah to several youngsters as the number of Ladishah artists in the national theatres were declining.

“Besides me, nearly two dozen Ladishah and Band-Pather artists are on a mission to teach the youngsters this art. We are teaching Ladishah to almost 16 boys,” Bhaghat said.

Nazir recently sang a song in which he has created a fusion of modern rap and Ladishah.

The 29-year-old singer lamented that the tradition of Ladishah was gradually vanishing in Kashmir.

He said, “People were getting bored of listening to Ladishah in a traditional way. But I tried to give it a new twist by rapping it with the modern style.”

“Although, my sole purpose of singing the Ladishah was to convey a message to the people of Kashmir that we need to preserve and continue our traditional legacy,” Nazir said.

He said, “So far more than two lakh people have liked my Ladishah song on Youtube.”

Nazir said that many people from Kashmir have taken up the music profession and most of them are of the view to preserve our language and culture.

According to Zareef Ahmad Zareef, a noted poet and historian from Kashmir, “A person performing Ladishah should have a good hold on the poetry who can play with words and should have a good knowledge of the poetic parameters of Ladishah.”

“Till the 1990s, there used to be folklore artists who would go from village to village to express their agony and pain. Among those, there was a group of people who used to perform skits known as Bandh Pather and used to entertain the rulers of that time. During the interval of the skit or the play, a Ladishah would come out to present its solo performance,” Zareef said.

He said that Ladishahs were critical but full of humour. “Ladishah performers used to convey the issues and the problems to the king humorously through his performance to make him aware of the problems without annoying him,” he said.

He said that the Ladishah used to be an important part of the Bhand Pather tradition.

Zareef said, “In the harvesting season, the Ladishah used to collect the food and grains given to them by the farmers of the society which used to be the only source of revenue model for their livelihood.”