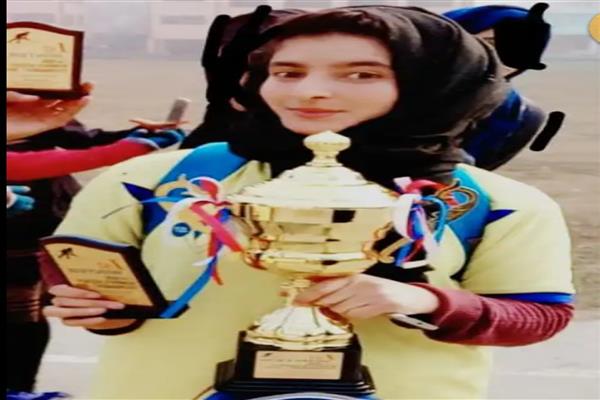 The 23-year-old Reebu Hassan always aspired to excel in sports when most of her contemporaries used to think otherwise. Despite challenges, she didn’t budge from the field and played sports like judo, carom, boxing, hockey, kabaddi, cricket, and football.

Not only did she shine in various types of sports but trained others to propel them to push the limits and aim higher in life.
She chose to popularize hockey in the valley and infuse young blood to train aspiring sportspersons for different platforms in the game.
The 23-year-old has been appointed as a hockey coach by the Jammu and Kashmir sports council recently.
“As of now, the Jammu and Kashmir Sports Council has posted me in frontier district Kupwara to coach the Under-14 and Under-17 hockey players. They all are registered under the Council,” says Reebu.
Hailing from Lasjan area of Srinagar outskirts, Reebu says that she is the only hockey coach from Kashmir division.
Among all these sports, she chose to get professional hockey training. “I have pursued a sports course from National Institute of Sports (NIS) Patiala wherein my specialization was hockey.”
She also said the hockey game in Kashmir valley “is given the least priority but I am trying hard to give it a new face to make it more popular here.”
Reebu believes that it is important to carry a professional degree or a course certificate to be a coach or a guide for the sportspersons.
She has recently completed her graduation and has shifted to frontier district Kupwara to train the local hockey players of the area.
“I have played three national senior-level hockey championships. In fact, I am the only coach among both boys and girls from Kashmir who has played more than two senior level hockey tournaments at national level,” she adds.
For her efforts, she was felicitated with scores of awards like Women Empowerment Award, National Sports Award that was presented by National Sports and Physical Fitness Board of India.