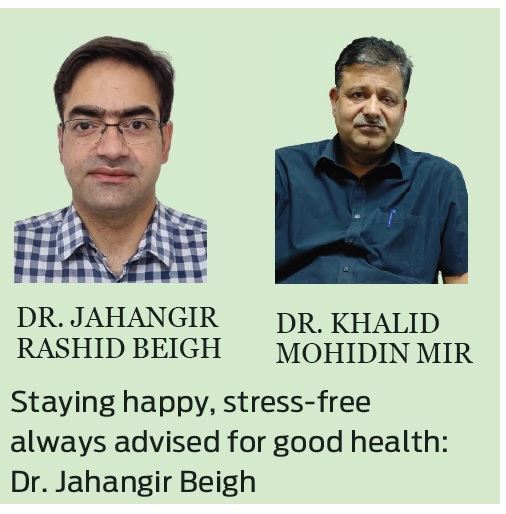 Srinagar, Sep 29: As September 29, is globally observed and celebrated as ‘World Heart Day with the aim of educating people and drawing attention to the steps they can take to prevent and control cardiovascular disease (CVD), campaigns are held globally to encourage people to take charge of their own and other people's heart health.

Dr. Khalid Mohi-u-din Mir a senior cardiologist with a vast hand of experience in heart-related issues in the valley in an exclusive interview told Rising Kashmir that with the arrival of winters and a drop in the temperature there is an increase in the incidents of heart attacks, saying ‘that it is not a myth but a ‘harsh reality.’

Stating that the colder temperature may be one of the main reasons which lead to physiological changes that accumulate to eventually cause a heart attack. When it gets cold, the body needs to keep staying warm. To do this, our blood vessels constrict (tighten/become narrower) and this requires blood to be pumped harder through the blood vessels. This means that blood pressure is almost universally higher during the cold season, Dr. Mir said that a drop in the temperature brings changes in the human body and also in other living organisms and which eventually tends to make blood ‘thinner’ leading to the tendency of coagulating the blood fast during winters.

“There is a ‘Sympathetic System’ in the body which gets activated with the cold weather and the blood pressure tends to be on the higher side in cold weather as compared to the warm weather and more importantly the change in the lifestyle which is ‘Sedentary’ and is more prevalent in winters in Kashmir posing a risk of bad cardiovascular health”, he stated.

Stating the other elements responsible for bad cardiovascular health, Dr.Mir said that more consumption of ‘salt tea’ in winters, type of foods consumed in winters which mainly include a lot of Red Meat, Harissa, and other oily foods also contribute to the increase in the prevalence of heart attacks during winters.

Dr. Mir said that the winter chills can be particularly difficult to handle during the winter and the heart's functionality suffers as a result of the body having to work harder to regulate heat when the temperature drops. For someone who already has heart disease or a history of heart attacks, the risk can be quite high. The body's needs for oxygen rise dramatically in the winter. Vasoconstriction already occurring causes less oxygen to reach the heart, increasing the likelihood of a heart attack.

“The coronary arteries may narrow as a result of the higher blood pressure, which could decrease the amount of blood and oxygen reaching the heart and its muscles. This can lead to a heart attack. In the winter, your blood volume is also higher, as appeared differently in relation to the summer, when we sweat more. Higher blood pressure is a result of the body retaining more fluid”, Dr. Mir explained.

Comparing the present era with the early 1950s and 60s when winters used to be harsh winters Dr. Mir says, “Those days it used to be ‘Frostbite’ which used to be a concern and now it is heart attack”.

He said that heart attacks will always occur to a predisposed individual, saying that people back in the early 1950s and 60s were lean and not obese, and their food and salt consumption was less and more importantly their level of stress was less.

Dr. Mir adds that an increase in stress, increase in the number of working hours, disruptions in sleep, excessive use of motorized means of transport, and increase in the consumption of fast foods will predispose any individual to heart attack.

In an appeal to the people of Kashmir, Dr. Mir urged people not to start work early hours during winters, saying that people should only move out when there is an increase in temperature.

“I have witnessed that as soon as the snow falls in Kashmir, people on the very next day took out their shovels to clean off the rooftops or streets which they should not and rather should wait for few days so that temperature settles down to normal”, he said.

Dr.Beigh stated that the dietary plan should be in accordance with the work output saying that post meals there should be an output of burning of calories as well, saying that as and when the sun comes people should expose themselves to the sunlight.

“If we generalize it to make a good cardiovascular health, it lies with a formula of avoiding Five ‘S’, which are stop Smoking, avoid Stress, cut down on Salt intake, cut down on Sugar intake, avoid Sedentary lifestyle”, he said.

Who is more susceptible to having a heart attack in winters?

Those with underlying health conditions or already exposed to heart-related issues, Dr.Beigh said that they should get a cardio check before the onset of winter to see their BP levels and other important parameters.

“Those who are aware they are at risk should not ignore their symptoms and if they experience symptoms like breathlessness, chest pain, feeling of more palpitation, they should immediately consult the doctor”, he added.

Urging people to be more cautious and serious about the intake of quality foods, Dr.Beigh said that many people nowadays tend to consume processed or canned foods saying that people should cut down on those and should consume fresh foods.

“The sedentary lifestyle with more stress levels and fewer activity levels, the poor quality of food, intake of more calories and less physical work out, economic stress, these are the factors adding to the bad cardiovascular health”, Dr.Beigh said.