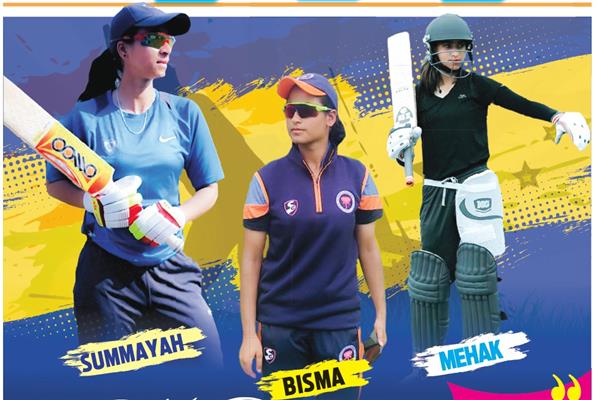 Not just the gentlemen’s game, the cricket also belongs to ladies who have been working hard to make their space on the ground. Showing that women are nowhere behind men, the women cricketers of the valley have proved that they can play and win the game. Confident, courageous and graceful enough, the women cricketers are making a path of their own.

Sumaiya Jan, national qualified cricket coach of Kashmir, has been representing the J&K since 15 consecutive years and has played almost 25 nationals. Hailing from Shopian, she had a passion of playing cricket since childhood and used to play with the boys as she found zero presence of girls in the ground.

Watching her brother and cousins playing cricket, she would get fascinated and wanted to play too. After finishing her school, she would go to the playground to play cricket.

When she was in senior secondary school, she saw some more girls playing cricket and thought she could play better than them and then continued playing.

She said, “In 2007 I started taking the game seriously and started knowing more about it. I performed very well at Sonwar. I scored 47 runs and took 5 wickets in the match which impressed the coach N P Singh. Then I went to Indore for nationals and received exposure of outside state. When I played matches against other states, I came to know that I am better but I have to work harder,” she said.

Putting her blood and sweat in the game was not enough, she had to face the society.

She said that the first thing that a girl from every sports field bears is society. “People don’t want their daughters to get consulted by a male doctor but also would not let their daughters or sister to study. Struggle is if only girls get 20% of the support that boys receive, there will be no district in Kashmir where you can’t get international participation,” she said.

Due to the fear of society, her family was initially not supportive but her passion didn’t stop her. She said, “Shopian is the only district which is lagging behind if we will talk about the girl sports. The reason is the girls' participation is less because society is not supportive which is making parents insecure about it.”

After passing senior secondary school, she skipped her studies for two years for cricket. Then her family finally allowed her to play cricket on the condition of pursuing studies further. Currently she is pursuing her Ph.D.

For her, cricket is the relieving thing after prayers and Quran. “If you are stressed, you are told to offer prayers and recite the Quran but for me the third thing which gives me relief is cricket,” she said.

Recalling the old times, she said there were very few girls from her district who played cricket.

To promote cricket among kids, she has taken an initiative of providing training to school kids and making them play in various matches. She has also provided free training camps to girls in south Kashmir for one and a half months.

“My target is to create a long line of talented players so that people would forget me and remember them only. The girls don’t go out and I want people from my district to participate in every game,” she said.

Talking about the role of the government in introducing the youth into different sports, she said that the government should secure the future of coaches so that they can further rectify the players. She added, “Like school needs teachers to function, ground needs coaches to function. In every district for every game, there should be at least 2 coaches who can properly train the players.”

She said, “Some people want my team to lose but all I know is winning only. When people are waiting for me to lose then the taste of my win is different.”

Another cricketer from Buchpora, Srinagar, Bisma Hassan had often heard in her childhood that cricket is the game of boys and she should shun the game. Going against all the reserved opinions, she used to practice with the male cousins and her neighboring boys to hone her skills. “I always felt dearth of girls playing cricket in my locality. I used to think why aren’t there more like me who are passionate about cricket,” she said.

Since 2014, she has been associated with Jammu and Kashmir Cricket Association (JKCA) and has played in Under 19, Under 23 and senior championships.

Recalling her initial years of cricket career, she said it was very difficult to move out of the houses for playing matches. “Many of our relatives told my father to stop my game and I used to get apprehensions that I would be told to leave cricket but he never told me anything. My family provided me immense support, my father always supported me and wanted to see me as a cricketer only,” she said.

Imagining women playing cricket was unimaginable years ago and Bisma believes one needs proper guidance and then there is no way to stop. “The one person who got me out of my house and showed me the way is Idrees Gundroo (one of the fast bowlers). If only we are guided properly, we can do anything in any field,” she said.

The 23 years old all-rounder has witnessed the change in time from personal experience to the cricket at large. “Society has changed. Girls are coming forward and opting for the game of their choice. They are making names everywhere,” she said.

Currently pursuing bachelors in Physical Education she believes that one day she will be one among the women in blue. She said, “With the experience that I got outside Kashmir, I got to learn a lot. My performance got better and I believe that one day I will be in the Indian women’s national cricket team.”

Bisma said that the passion for cricket among young girls is high. “Earlier I used to see 5-10 girls in a trial match, now more than 50 girls turn up.  The valley has produced good male cricketers and now it’s the turn of the females to carry forward the game,” she said.

Born in 2001, Mehak Sofi, a batter and a wicket-keeper from Mattan Anantnag is currently playing for Ranji Trophy. Back in her hometown, when she was playing in the district championship, Mehak was spotted by one physical education teacher, Sajid Ahmad who appreciated her good performance and suggested her to practice regularly.

Travelling 9-10 kilometers every day, she started training in morning as well as evening sessions. “I used to practice with anyone, sometimes with kids as well and started giving more time to the game. The mindset of society was different back then and no girl was allowed to play cricket,” she said.

Enjoying full support of the family, she said that her relatives would also object to her playing. “My parents always backed me. If girls are provided only a little support, they can achieve anything,” she said.

Despite her struggles, her passion for cricket has kept the spark inside her alive. “I feel happy on the ground. Cricket is everything to me. It heals and relaxes me,” she said.

Since 2015, she has been playing cricket and has played U19 three times in Himachal Pradesh, Goa and Gujarat and has played Ranji Trophy twice. Also she has played T20 matches and has got selected for one day matches as well. She said that the matches played by the BCCI (Board of Control for Cricket in India) have turf wicket which the UT is lacking. “When we play outside Kashmir, we struggle a bit as here we don’t get to play on turf ground. There should be turf grounds in Kashmir too,” she said.

Mehak is very interested in popularizing cricket among the females. In Mattan, she has made a WhatsApp group for female cricketers and started inviting them for practice. She said, “I invite all the girls who aspire to play cricket. They and I practice together and get to learn a lot from each other. At first, 15 girls joined but now the number is rising. The girls belong to far flung villages where people are not fully aware of the game. They come in salwar-kameez and wear sports uniforms in the restroom and get into the sports mode.”

The cricketers want their efforts to be acknowledged and with a little bit of support can make them touch the skies.