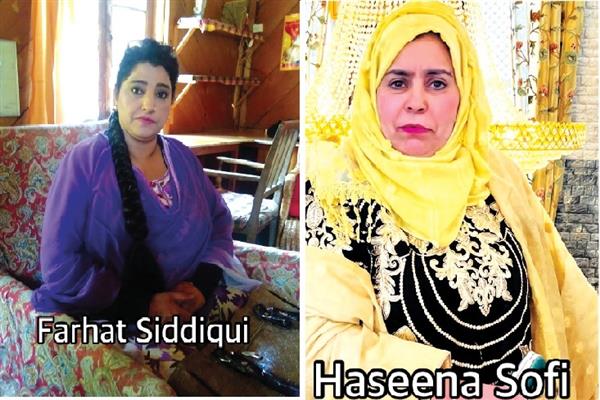 Doordarshan which once was the only source of Television entertainment in the entire Kashmiri households,the female actors have an equal contribution to entertain the people as their male counterparts. The female actors not only ruled the hearts of the audience but also pursued their passion in the conventional times and after all these years, the actors are enthusiastic, passionate and silently making their presence on television and other platforms.

One of the finest actors of Doordarshan, Farhat Siddiqui hails from Maharaj Gunj, downtown area of Srinagar.She was taught acting, dancing and singing by one of her teachers, Kusum in school. Also getting inspired by the actors on television, she would get fascinated and repeat their dialogues to herself.

Watching her passion, her brother took her to Doordarshan where she was told to be an anchor of the children show. She further honed her acting skills and since the 90s she has participated in a number of drama serials and stage shows.

She said, “I was among the beginners from downtown who were in the field of acting. My family supported me a lot, especially my father who never stopped me from choosing acting.”

Gradually she started her own production line and started producing various famous shows till 2011.  “I have done production work in Delhi and All India Radio (AIR) as well. After some time, things changed a bit in Doordarshan and I stopped producing shows,” she added.

Farhat, being passionate about acting, didn’t stop and she founded a club called Mehak Dramatic Club where 15 boys and girls are associated with her and perform theatre shows in and outside Kashmir as well.

“We do everything that entertains our audience. Most of the time, we present comedy shows but we also present a message or awareness to our people and as soon as we start to play, the audience surrounds us in no time,” she shares.

Talking about her mentor she said, the acting skills dwelled in her already but she needed much guidance and support. “Majeed Ahmad Wani of Kalamanch has taught me acting skills. I have worked with many producers and directors like Sheikh Haneef and Nisar Naseem etc,” she said.

Known for her versatile roles, she has been appearing in all kinds of roles. “I have done negative roles as well. I have played the role of a mad woman.  When the audience claps for me, my job is done,” she said.

In 1990, she did a play called Wutre Boneul, for which she received an award from the cultural academy. Besides this, she has been awarded and appreciated for her work many times.

Farhat recalled her struggles and said that her relatives had shunned talking to her family for letting her act on television. “Many neighbors would tell my father to stop me from doing this work. I also avoided visiting my relatives but I feel proud today when those same people approach me for help. Television made me and I am known and respected for my job,” she said.

While talking about older times where there was no social media she said the artists got the platforms through TV and Radio only to showcase their talent. “There was no Instagram, Youtube or Facebook where we could have shown our talent. We made our fan following only with the institutions. Even till today with the gaining popularity of other channels or the internet, Doordarshan never loses its relevance,” she said.

Simultaneously her heart aches while looking at the artists like her.

“Acting should be kept to passion only. Artists have been suffering because of the lack of opportunities. There are talented youth but we lack exposure and opportunities. There is no need for producers and directors to come from outside if we would have provided a platform to our talent,” she added.

For Haseena Sofi, it was more compulsion than her passion. She has been acting since 1995 and has played mostly the role of a mother in dramas and plays. Having rich experience, she still appears in various songs and relishes her role. Also, she has done a lot of theatre plays in Kerala and Pune where her acting skills were appreciated and was awarded too.

Recalling her time when she started acting, she said, “Our house in char-i-sharif caught fire and we were not given any money. My kids had no food to eat. My husband was a laborer who used to earn 50 rupees a day and that was not enough. It was only because I wanted to feed my family that I came out of home to work.”

One of her family acquaintances, Ghulam Mohammad Kumar who used to work in Radio Kashmir back then, introduced her to the world of broadcasting.

She added, “Being a girl from Eid-garh, Srinagar I never knew about all these places but gradually my acting took me to an outside state as well.”

While self-improving her acting skills, she felt more interested in it and started taking it as her profession.

Talking about her era, she said that acting is easy today. “The times have changed a lot. There are many young boys and girls coming towards acting. It was very difficult back then when we actors were labeled with many things,” she said.

She said that the conservative nature of society back then disallowed many women to pursue their studies, leave alone taking acting as a career. “The people who opposed my acting back then, are now saluting me,” she said.

Recalling her first time on camera, she said that she was not scared, her problems back at home had made her stronger. She said, “With the money I earned, I gave good education to my children and married them off. Acting is in my blood now. If I leave acting, I will soon fall ill. Till I am alive, I will do acting. My children tell me to leave but I don’t want to leave now.”

Having worked in many radio dramas as well, she is known for her fine voice as well and has worked with artists like Shadi Lal Koul, Jai Kishor, Jabeer Shai, Bharti Zaaro etc.

After giving all these years to acting, Haseena appeals to the government to think about artists’ fraternity. “We have given golden years of our lives to the institution. Government should think about the betterment of our future,” she added.