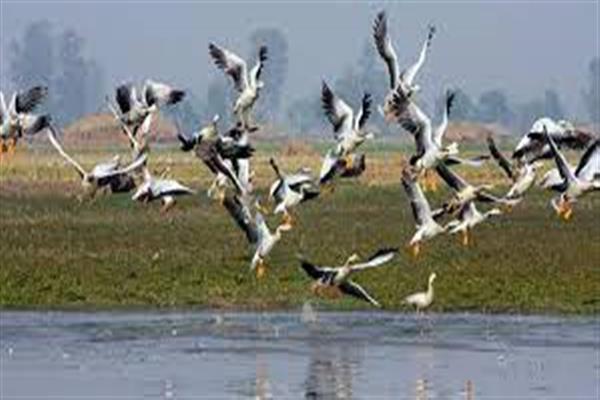 Hygam wetland in north Kashmir’s Baramulla district has witnessed a surge in migratory birds this season, while Hokersar known as the ‘Queen of Wetlands’ is witnessing a massive decline , the Wildlife officials said.

Wildlife Warden Kashmir Ifshaan Devan told Rising Kashmir that around8 lakh migratory birds are still present in Hygam wetland which is highest for the wetland this season.

“While Hokesar which mostly remained frozen this winter as compared to Hygam wetland forced thousands of birds to shift to other destinations including Hygam” she said.

Deevan said during the freezing weather conditions, the department had procured paddy grains for the migratory birds to feed as a supplement. Each wetland in valley has its own staff for the feeding purpose. They feed the birds in their respective wetlands during the season.

The official said during the severe cold conditions this year, it was difficult for employees of the department to feed the visiting birds, but despite challenges, department did it professionally.

“So far lakhs of birds have migrated to Kashmir. We have around 1-2 lakh birds in Dal Lake, 1.6 lakh in Hokersar, 7-8 lakhs in Hygam, and around 40,000-50,000 at Pampore wetland. These wetlands are conducive and serve as breeding grounds for them,” Deevan said.

Range Officer Hokersar Wetland, Qazi Suhail told Rising Kashmir that the severe cold and dryness in wetland this season resulted in a major drop  of migratory birds visiting the wetland this year.

He said presently there are 1 lakh 60 thousand birds in the Hokersar wetland which is less as compared to previous years when the number here used to be around five to six lakh.

“Usually these birds came from Siberia, China, Russia, Europe, Japan, and Turkey where minimum temperatures drop below Kashmir. Now, this year valley also witnessed a sharp decrease in temperatures due to which these birds flew to other wetlands including Gharana wetland in Jammu,” he said.

Suhail said in 2018, the Irrigation and Flood Control department started dredging in nearby flood channels due to which water had not accumulated in the wetland. The water level has reduced in wetland which is also playing its role in decline, he said.

The range officer said that the ecosystem in the wetland has been disturbed as water coming from different points is still blocked.

“If wetland has to be preserved then there is a need for dredging to maintain the water level in it,” he said.

Hokersar in Kashmir suffered massive siltation during the 2014 floods, which damaged the ecosystem in the area.

Suhail said if the depth of wetland was 12 feet in the year 2014 now it has been reduced to 4-5 feet only now due to siltation. There is a need of dredging so that silt can be removed and water could get accumulated easily, he said.

“Normally these migratory birds visit Kashmir from 15 October and remain till the end of 15th April every year.  Around 20-25 employees usually have been deputed for feeding the birds in the Hokersar,” Sohail said.

Talking about the difficulties in the feeding the birds, he said, “During sub-zero temperatures, there lots of problems. We have to break the ice crystals and make holes to reach specific pools,’ he said.

Suhail said they were feeding around 8-10 quintals of grains each day to serve guests.

“After maximum birds flew to other parts in the valley pressures on us decreased,” he said.

“Presently we had a pressure of encroachment in nearby areas. Although we also are controlling it, but there are also some gaps where we need to focus more,” he said.

Officials say at least 800,000 birds have flocked to Kashmir in the past two months and expect more to arrive as temperatures improve in towards February end.

In recent decades the numbers of visiting birds have declined, which experts say is due to a combination of climate change and urban development.

They say construction around wetlands; accumulated trash and the changing Himalayan climate is robbing the birds of their traditional watering holes and nesting areas.

There are around nine wetlands in Kashmir including Hokersar, Hygam, Pampore, and Bandipora where these birds rest their flights during the winters.

Dr. Irfan Rashid, who is Assistant Professor at Department of Earth Sciences Kashmir University, told Rising Kashmir that government has failed to implement any policy regarding wetlands in the J&K.

“Presently we do not have any policy regarding the wetland. There is not a single law for their conservation and no policy interface for these wetlands,” he said.

Rashid, who has vast experience on the wetlands, thinks the main reason behind the dryness of Hokersar wetland is dredging which was not done scientifically.”

“They failed to establish a good mechanism. I don’t think they knew how and how much they have to dredge a specific wetland. Instead they did it randomly,” he said.

Rashid said when there are no breeding grounds because of the absence of a good amount of water. It will affect the bird’s habitat.  From 1800 hectors Hokersar has remained 1300 hectors over the past three decades due to faulty interventions of the government.