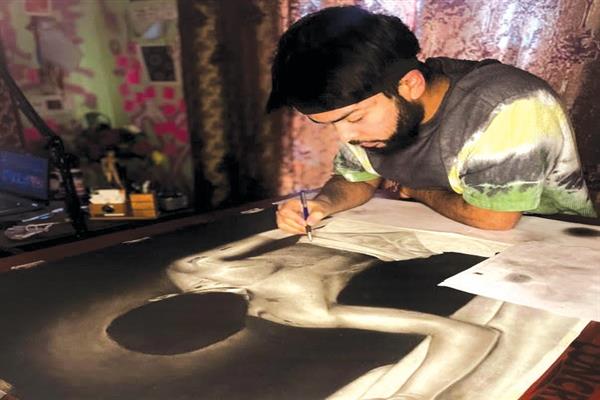 When he was in the ICU, battling his illness, he would wake up for some time and draw something with the pen on the drawing book which he had asked from a nurse. There he discovered his artistic side. Hailing from Rambagh Srinagar, Waseem Mehraj started sketching since childhood and it triggered into him more and more while he was admitted in hospital. “When I was unwell, I used to sketch and don’t even remember what else I used to do. After some time, when I got better, I realized that it was something very close to me. I explored myself everyday,” he said.

When he recovered from illness, he started self-learning sketching from You- Tube tutorials and his skills started to improve. He started give 3D effect to his sketches and make them look lively and realistic. Apart from the demand of people, the sketches he made include the portraits of personalities from the entertainment and sports industry. “With time, I got into realism where you try to draw something which looks more real. Then I practiced more and more and learnt the concept of photo realism- where a sketch looks like a photo.

The last thing was surrealism when you can change reality through art. The things that cannot happen in reality but an artist make it happen with his work,” he said.

Through his artwork, he wants to create awareness about mental health, depression and anxiety. “With my artwork I wanted to let people know that it’s not abnormal and they are not alone as I was also going through the same situation,” he said.

In 2019, as people started developing stress and negativity due to lockdown, he started to make sketches which they could connect with. “Many people were facing depression and news of suicides was often heard. Talking about it and seeking help is very important but at the same time, it is difficult to do in our society,” he said. He further said that most of the people through their social media handles, present their success stories and barely anyone talks about the failures and struggles of life. “Social media plays an important role in shaping our thoughts. A person who is going through a tough time, would think that I am the only one who is sad while the rest are happy. Through my work, I talked about the problems and tough times that people go through in their lives,” he said. Having demonstrated the problems faced by a person in a surrealist way, one of his artwork is the series of sketches titled- My Rainbows are Grey. He said, “I think that my generation faces more mental stress as compared to the previous generation and they need to be taken care of in whatever way we can.” At present, he is pursing integrated MBA and also teaches sketching to students across the country.

Recently he has started incorporating colors and started a series called still life. For his sketches, he uses graphite, charcoal and brushes to smoothen the surfaces. “Charcoal and graphite vibe more with me but I like colors too. My artwork depends on the person who is visualizing it. For some it may have no value but some will fi nd a deep connection. It always depends on the person,” he said.

Talking about his inspiration, Kelvin Okafor and Jono Dry are some of the artists he likes. “In the beginning, I was inspired by Saiful Mir who is a Srinagar based artist, he said adding “I have kept my initial sketches there in my profi le so that budding artists can see that one gets gradually better with lots of practice.” Waseem feels that artists find their space on social media only to showcase their work and lack of galleries and exhibitions makes the artist suffer. “People don’t have knowledge of art here. The artwork I make, if someone makes the same outside Kashmir, the prints would sell for 40,000 rupees. It takes a lot of time and thoughts. The exhibitions and auctioning doesn’t happen here in Kashmir which also gets difficult for an artist,” he said.

To promote art among students, he calls for better art classes to be conducted for students from the beginning. “In schools, art is limited to sticking ice cream sticks on their drawing books which most of the time parents do for kids. We limit the person’s capability to the syllabus. What we can do for the people in future through art should be the main focus,” he said.