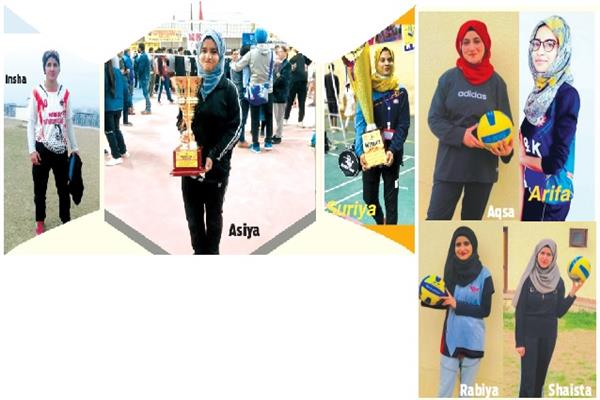 With hands joining tight, a player with all her strength throws volleyball to her opponent on the other side of the net. The opponent retaliates back with the same force and the game goes on. These female players give their blood and sweat every day to learn the techniques of volleyball.

As volleyball is gaining momentum among the female players of Kashmir, with smashes and high throws, the female volleyball players are trying to make their name in the game.

With an aim to prepare girls of Kashmir for various tournaments, Amir Bhat and Munner Aalam, opened up their Elite Volleyball Club to females in 2014. “There was always more participation of female players from Jammu and fewer from Kashmir. To shift this dominion, the club welcomed and started training girls,” Muneer said.

Established in 2011, Elite Volleyball Club is known for producing a set of volleyball players in Kashmir who participate in national championships. Currently 32 girls of different age groups who belong to different districts like  Baramulla, Ganderbal, Shopian are associated with the club.

Muneer further said that earlier the girls after playing college tournaments didn’t find any option of playing and hence the club provides them a platform to go further in the game.

“The platform, after passing college, is provided to them by our club. Our players have set the standards and can compete with the players of any state,” he added.

Working on the grassroot level, he feels that the game needs more upliftment. “Players should get proper accessibility to indoor stadiums and accommodation for the ones who are from other districts. Hostels should be made to accommodate the kids. With the sports policy, every kid should rise,” he said.

With every passing day, more and more females are emerging with some working very hard to be the best.

Insha Bashir, the only female player from Kashmir who has played senior national 4 times consecutively and has represented Jammu and Kashmir as a captain is currently a coach of boys and girls volleyball team in North Kashmir.

Hailing from Baramulla, Insha recalls the time when she had to move to Srinagar daily to learn the game.

She said that she would leave her house early at 6:30 am and reach back home at 11:00 pm. “I had a tough time back then when there was no volleyball facility in my district. The fare was very high and at times it got really hard for me to pay.”

She said, “Initially there were not many techniques taught in the game but Muneer Aalam honed my skills. He trained me for 4 years which made me capable of being a captain of the J&K team.”

Having played 3 inter university national championships and 7 state championships, she always wanted to create an atmosphere of volleyball in the district so that the younger girls wouldn’t have to face the difficulties that she did. “Earlier the boy team would only go for matches. I thought that the girl team should go too. I talked to my higher authorities and finally it became possible.”

Now from two years the girl team from Baramulla is going for matches who are currently getting trained under Insha.

She said, “The girls are coming forward in good numbers. I am supposed to train 15 girls only but I am getting 30-35 girls.”

Another national player, Arifa Gulzar shared her experience of national matches. “Despite the tough competition we face, our team performs very well.  We are appreciated and the standard of playing has gone up with the better coaching that we receive.”

Arifa is married and also has a kid and she looks forward to practicing further.

“Parents should allow their girls to go in the game as only some are bestowed with the talent so they should not waste their daughter’s talent,” she said.

Aiming to make a career in the sport, she said that volleyball is her passion and her craze.

She said, “When it was our second inter-university championship, we had won three matches and it was very special. Last year, we played in the state championship and after a long time, our team was runner up.”

Playing as a setter in the game, she said that her Elite volleyball club has molded the players as it is a game of team and everyone has to put equal efforts. “We have potential and all we need is chance. We can be a part of an international platform too,” she said.

Suriya Feroz from Chadoora who was once a pro Kabaddi player was motivated to see coach Muneer teaching volleyball to girls. Not giving a second thought, she changed her game and opted for volleyball. “Coach told me that my height is good, which is a plus point in this game, so I started playing the game very seriously,” she said.

Having played many state championships, senior national and 2 inter-university championships, she said that number of girls playing from her district is less as compared to Srinagar and the players have to come to Polo Ground for training. For her distance doesn’t matter, it’s her passion for the game that keeps her going.

Some of the best and experienced players are passing on the skills to younger generation and imparting training to the budding players.

Kashmir Volleyball Club, a newly established one, is being run by two volleyball players- Sadiya Hussain and Anas Younis.

21 years old, Syed Aqsa has been interested in volleyball since childhood. Having played in various intercollege and intra college championships, all she needed was a little bit of more guidance and then she joined the club so that she can play professionally.

Getting inspired by watching girls making their names in different sports, she thought that why can’t she win like them?

“I am never scared. I always try to be the best in the game. One has to set the target before going to court,” she said.

Talking about the surge in the number of girls in volleyball, she said that earlier people would not give much importance to sports. “Volleyball has been my passion. Luckily I have a cousin who is a sports teacher and he suggested that I should go for sports as it has a huge scope,” she added.

Another one from Srinagar, Peerzada Shaista Farooq Masoodi, currently studying in Women College MA Road couldn’t stay back for longer because of her health issues. “As soon as I got better, I jumped back into the court. I couldn’t stay away from the court for longer,” she said.

With the coaches of the club, Shaista along with others do hardcore practice and get prepare for upcoming state level matches. “Every girl should participate in a game and reach where she is meant to be. One has to work hard to prove mettle. Even today many girls who could be good players, are not allowed to play by their parents,” she said.

However she raises her concern regarding the facilities provided in other districts of the valley. “The infrastructure is still not enough for girls who belong to other districts. There should be facilities in all the districts,” she said.

Besides having versatility in other games, Syed Rabiya from Baramulla opted volleyball as she said, “My heart beats for volleyball only.”

Currently she is getting prepared for the upcoming state championship and she aspires to get selected.

“I am very active in sports and I take part in various games. We get trained to win and make our place in the game,” she said.

She said that various international as well as national players have evolved from her districts and many are coming forward. She said, “I feel connected to this game and I am confident with this. I am learning the game with interest and managing my studies as well."