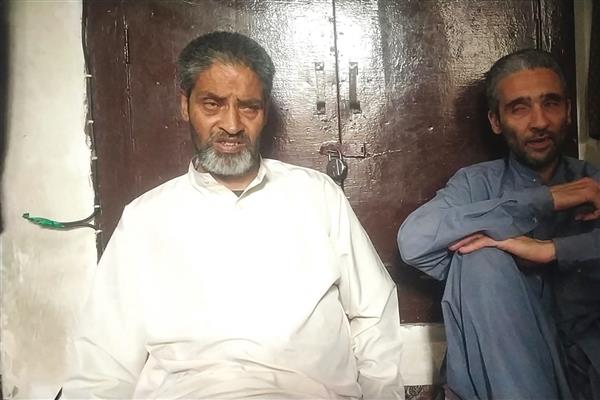 Stitching a quilt inside a closed room, two blind brothers from Chakbagh area of Nigeen in Srinagar have garnered immense praise for their work and fashionable quilt designs.

Blind by birth,48 year old Ghulam Nabi Teliand his younger brother Muhammad Hussian, 42 earn their livelihood together with the help of their father. Both have earned a unique name by making trendy quilts, cushions and mattresses for customers.

They believe that living respectful life is a hundred times better than begging or being dependent on someone else as most of the blind people do.

They live in a modest house having two parts. Its third floor has been turned into a small workplace.Hussain said they earn their livelihood by making quilts, cushions and other items. They receive orders mostly from local customers.

“We received training at the National Institute for the Visually Handicapped in Dehradun where we learned Braille and other skills,” he said. “We learned practical training from our father.”

He said he can prepare a simple quilt within 2-3 days, while designable quilt takes more time. For Hussain, in winter the work becomes difficult due to dip in temperature and his hands crumble due to cold. “I am thankful to Almighty Allah, who provided me everything despite multiple challenges," he said.

Hussain said they also have sister who was also born blind, who is not sound and is unable to work.

Despite the odds, Teli brothers have gained expertise in their work and they use no stick or wear any dark glasses, unlike their sightless tribe. The hope is still alive and they want to earn their livelihood with dignity.

“In this age, when people prefer everything machine-made, there are customers who prefer traditional work. It is more durable and long lasting,” he said.

Recalling their family work, Hussain said their products are used across Kashmir and they get a good response from their customers.

Hussain said government should also come forward to help them as they need special attention.

“We don’t want government jobs but there should be special scheme and interest less loan for us so that we can live our life peacefully and without being dependent on anyone.”

As per Hussain there is no scheme for visually impaired community. “Due to the Covid lockdown and restrictions over the past two years, our business was also affected," he said.

Hussain said they went to several government officials and most of them did not listen to them. “They told us to beg instead of demanding favours,” he said.

“Owing to prevailing challenges and Covid-19, we are uncertain about our future. So far my brother managed his responsibilities and gave education to his children. More struggle is ahead and the testing times have not yet ended,” he said.

Hussain said communication is very important for which seeing also matters.“But for a visually impaired person, if we cannot speak well, then we cannot communicate or express ourselves fully,” he said.

Both brothers are using mobile phones to reach out to customers, family members, relatives and friend.

“Technology eases out everything. I have a phone that speaks out about everything. So, I don’t need anyone’s help to read out numbers for me,” Hussain said.

Sitting in the ground floor inside a small kitchen Hussain’s brother Ghulam Nabi Teli cracks jokes with his neighbor about the recent electricity crisis in Kashmir.

This ‘disability’, however, did not stop him from leading life the way he wanted to. Today he has wonderful colleagues and a wife who never makes him feels lesser.

Teli has three children and he manages his livelihood on the same work. “Few years back, I underwent a minor surgery due to which my work got affected,” he said.

The visually impaired brothers said over the past three years they have not paid their electricity bill of Rs 30,000 due to financial constraints and the bills is still unpaid. “There should be some relaxation for us from the government,” Teli said.

He said they have seen ups and downs but that have not stopped them from thinking big as they say they will continue to live with courage and respect.

“Our father was against begging and therefore the brothers learned to make quirky quilts with the help of their parent, which now they excel at,” Teli said.

Recalling the journey, Teli said once a young man Fida Hussain from Zadibal locality came to their home and advised us to get training in Dehradun.

“We learned making agarbattis, brail reading, candle making and other things from Dehradun. But, when we returned back from training, we didn’t continue that. We shifted to quilt making with our father who was a true guide for us and never discouraged us,” Teli said.

“My father was very supportive and positive. He never stopped me from doing anything or going anywhere,” he said proudly.

He says life is seldom fair and has its share of ups and downs. “But then again, life is also what you make of it,” he said.

“We have never seen the outside world where we live. We only can hear and touch. We have our own imagination. Our soul guides us. We work, sit, eat and no one can understand our world,” Teli said.

He appealed the government to announce a special package for them that would take care of their social security and so that they do not suffer anymore.

“No doubt we worked hard but our children should not suffer anymore. We also speak on behalf of other visually impaired children who face injustice,” he said.“There is need to believe in themselves to be able to become a part of the mainstream. As an individual, I always believe that one should never give up but keep trying and one day you will succeed.”

Muhammad Sadiq, father of the duo tried his best to get the sight of their children back or get them treated but returned back home hopeless.

“Local government did not extend any help to us. I will continue to empower my children. I am thankful to Almighty Allah for everything as my sons are not depending on anyone, now. I am very proud of them,” he said.

Sadiq says visual impairment is not in the eyes, it’s in the mind. “If you feel that you are visually impaired then you will not be able to do anything. You need to go out of the way to explore the world,” he said.

Sadiq appealed the people having children who are visually impaired or are specially abled to take care of them as they can do anything just like other children but the thing is they need encouragement.